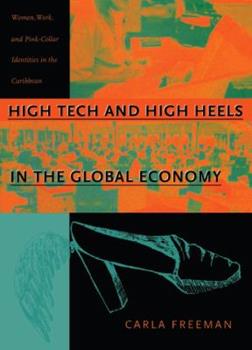 High Tech and High Heels in the Global Economy: Women, Work, and Pink-Collar Identities in the Caribbean

High Tech and High Heels in the Global Economy is an ethnography of globalization positioned at the intersection between political economy and cultural studies. Carla Freeman's fieldwork in Barbados grounds the processes of transnational capitalism--production, consumption, and the crafting of modern identities--in the lives of Afro-Caribbean women working in a new high-tech industry called "informatics." It places gender at the center of transnational...

Globalization and Transnationalism in Anthropological light

Published by Thriftbooks.com User , 20 years ago
High Tech and High Heels in the Global Economy is an ethnography of globalization positioned at the intersection between political economy and cultural studies. Carla Freemans's fieldwork in Barbados grounds the process of transnational capitalism - production, consumption, and the crafting of modern identities in the lives of Afro-Carribean women working in a new high tech industry called "informatics". It places gender at the center of transnational analysis and local Caribbean culture and history at the center of global studies. Freeman examines the expansion of the global assembly line into the realm of computer-based work; focusing on specification of the incorporation of young Barbadian women into high-tech infomatic jobs. These women workers are not simply integral to the workings of globalization but help to shape it's very form. By the inactment of "professionalism" in both appearance and lobor practices, and by their insistence that motherhood and work go hand in hand, they redifine the corporate profile of "ideal" workers and create their own "pink-collar" identity. Through new modes of dress and image making, the informatics workers seek to distinguish themselbes from factory workers, and to adopt new modes of consumption, they engage in a variety of extra income-earning activities. Freeman argues that for the new Barbadian pink-collar workers, the globalization of production cannot be viewd apart from the globalization of consumption. By showing the connections between formal and informal economies, she challenges long-standing oppositions between first world consumers and third word producers and between white collar and blue collar labor. She does so quite elogantly and educationaly in a way that is a refreshing change from traditional ethnographic work. I would truly recommend this literature as it appeals to anthropological scholars and students, Women, and Carribbean fields of study.
Copyright © 2020 Thriftbooks.com Terms of Use | Privacy Policy | Do Not Sell My Personal Information | Accessibility Statement
ThriftBooks® and the ThriftBooks® logo are registered trademarks of Thrift Books Global, LLC