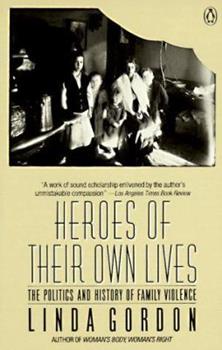 Heroes of Their Own Lives: The Politics and History of Family Violence

This description may be from another edition of this product. In this powerful and moving history of family violence, historian Linda Gordon traces policies on child abuse and neglect, wife-beating, and incest from 1880 to 1960. Drawing on hundreds of case...

Published by Thriftbooks.com User , 17 years ago
"Child abuse is not usually a product of unilateral brutality but of familial power struggles, shaped by extrafamilial social factors and historical change," argues Linda Gordon in "Heroes of Their Own Lives: The Politics and History of Family Violence." Those social and historical factors, the author contends, changed over time. So too did those activities that constituted abuse. One could substitute "wife beating," "child neglect," and "incest" in the place of child abuse in this sentence. Through a variety of sources--legal documents, social workers' case histories, and relief agency registers--Gordon examines how conceptions of family violence changed in Boston between 1880 and 1960, and why they changed. Her subjects are not upperclass families and individuals, but the lowest strata of Boston society. They are the Irish and Italian immigrants, the unemployed or underemployed, and the transient. To understand Gordon's analysis of family violence, it is important to understand feminism, male domination of the family, and gender roles. The author argues that the one thing that changed slowly during the period was how society and social workers viewed the family, a view too often adopted by writers on the subject. Historians, she argues, tend to think of the family as a seamless unit headed by the breadwinning father. The mother and children each have their own roles to fulfill within the unit, but all activity and decision flows from the male head of the family. Gordon scoffs at this generalization, claiming that the family is not a seamless unit but an agglomeration of individuals with aspirations that often conflict. The failure of social workers in Boston to alleviate child abuse, child neglect, wife beating, and incest stemmed from their overemphasis on "stresses" and failure to acknowledge this underlying power structure of the family. These stresses--extreme poverty, alcoholism, and unemployment--contributed to outlandish behavior. But the inability of women to take independent action to combat the problems facing their families allowed bad behavior to flourish. Social workers, reflecting the beliefs of society, attempted to rebuild patriarchal families at the expense of female independence. The pressure put on single mothers to reconstruct the patriarchal family through remarriage or reconciliation with abusive husbands, along with a similar pressures placed on married women to maintain a household even in the face of extreme abuse, exacerbated family violence. A vicious cycle emerged concerning women caught up in abusive families. For single mothers, they had to work for a living if they wished to care for their children and maintain a home. But in doing so, they left their children unattended or in the care of others. Social workers saw female employment as a potential form of child neglect and as a violation of patriarchy that required a variety of responses, from court actions to removing the children from the household. Women cou
Copyright © 2020 Thriftbooks.com Terms of Use | Privacy Policy | Do Not Sell My Personal Information | Accessibility Statement
ThriftBooks® and the ThriftBooks® logo are registered trademarks of Thrift Books Global, LLC