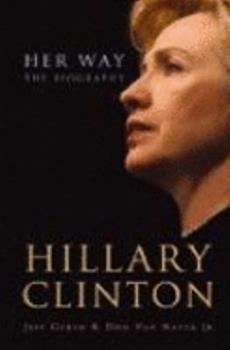 Pulitzer Prize-winning New York Times reporters Gerth and Van Natta bring readers the first comprehensive and balanced portrait of the most important woman in American politics and reveal what Hillary... This description may be from another edition of this product.

An excellent book on a very dynamic and enigmatic woman.

Published by Thriftbooks.com User , 14 years ago
Hillary Rodham Clinton is a very public and divisive person. Whether you love her, like her, have no opinion or hate her, this book takes you on a journey through her life that while we can't (and the authors can't) presume to know her most private and inner thoughts, we can certainly reach some conclusions and become more aware of her more public politics and ideologies. I am not personally a fan of Hillary. In fact I rather dislike her and totally disagree with her standings on all issues whether it be health care, abortion, energy issues, etc. However, I do find that after reading this book that even while I disagree with her and feel very suspect of her motivations and desire for power, I have come to have a very real respect for her intellect. Hillary and Bill made a pact to get him to the White House and then it would be her turn. Currently we are in the "her turn" mode. How they got there and how hard Hillary especially has had it in order to overcome many extreme obstacles is fascinating. This book reveals her strengths and her weaknesses without making any judgments on either. That is left to the reader. Well worth reading no matter your personal politics or feelings about the Clintons and Hillary in particular. Recommended.

This Book Uncovers The Good, The Bad, and The Ugly! A Must-Read For Fan and Foe!

Published by Thriftbooks.com User , 15 years ago
I thoroughly enjoyed reading this nonfiction novel. I believe Jeff Gerth and Don Van Natta Jr. have put together a well-researched and unbiased book that accurately describes Hillary Clinton's life and possible future accomplishments. While others have criticized this novel as an attack on Hillary Clinton, I came away quite impressed with all of the struggles she has overcome and her steadfast determination to do what she believes is the right thing to do. Granted she does change her mind quite a bit concerning what is right and what is wrong. I learned a great deal about Hillary's personality and the people she surrounds herself with; I was fascinated by the loyalty of her friends and colleagues. I believe Mrs. Clinton to be a smart, confident, determined, and experienced leader. I don't agree with most of her political beliefs. This book proves she can be abrasive, overconfident, and overly defensive when she doesn't need to be. The events, opinions, and fact-finding work throughout this book were nothing short of brilliant. Anyone who wants to learn as much as they can about this possible next president of the United States must have "Her Way" on their reading list. From growing up in Illinois (right next to where my Mom worked), to her days in Arkansas, and her eight years in the White House as first lady, Hillary Rodham Clinton has led an amazing and complicated life. And she has indeed done things "her way." Again, I must say, I thoroughly enjoyed reading this book from the first page to the last page. So be sure to check out this fantastic piece of literary work as soon as possible. You won't be sorry! Remember, this review is coming from a Conservative-Christian-Ronald-Reagan-Republican who thought he would never have much good to say about a woman on the LEFT. This book has indeed taught me that there is more to Hillary Clinton than I gave her credit for. See ya next review.

Published by Thriftbooks.com User , 15 years ago
Jeff Gerth and Don Van Natta are investigative reporters on the staff of the New York Times. In Her Way, they have scrupulously researched the life of Hillary Clinton and produced a fair and balanced account of her life (or at least as fair and balanced an account as one can produce without the cooperation of its subject, as the authors disclose in a foreword to their work). Gerth and Van Natta have dug deep (down to examining Senator Clinton's home building permits in the context of her practice of energy efficiency) and have penned an extremely worthwhile volume. Hillary Clinton emerges as highly disciplined, ambitious and tough. (Should she win her race for the White House, toughness will not be an issue.) The picture of Hillary as a young girl is moving and gallant-- as a 13 year old, she challenges voter fraud in the 1960 presidential election, weighing in on the side of her father's Republican Party, and she campaigns ardently for "the Presidency" of her high school class, winning admiration despite her defeat by a male classmate. Clinton's flaws are also depicted forthrightly by Gerth and Van Natta. She sometimes fails to conduct crucial research, with unfortunate results (a botched Arkansas trial is cited, as is her failure to read the full National Intelligence Estimate on the question of weapons of mass destruction and al Qaeda connections in Saddam Hussein's Iraq). Senator Clinton also emerges as impatient and dismissive of the rules that govern lesser mortals (she has consistently failed to file personnel disclosures required of her Senate office and some of her legal billing records at the Rose Law Firm were of questionable veracity), secretive, and inconsistent in certain of her policy positions (her position on Iraq has progressed from ardent advocate of invasion to advocate of short-term withdrawal; that Senator Clinton's position has evolved is less remarkable than her unwillingness to discuss the evolution forthrightly). Her Way also probes Senator Clinton's relationship with her husband, the former President, and her role in the formation of White House policy. What emerges is a complicated picture. The evidence assembled by Gerth and Van Natta suggests that Hillary and Bill Clinton love each other-- Bill Clinton's repeated marital indiscretions notwithstanding-- but also indicates that mutual ambition lies at the center of their relationship. Van Natta and Gerth refer repeatedly to a 20-year plan, supposedly crafted in the early 1970s, to put Bill in the White House, and amended during the White House years to include an 8-year presidential term for Hillary Clinton. While Van Natta's and Gerth's evidence for the existence of a 20-year plan and its extension is not airtight (and the existence of such a plan has been denied by the Clintons), there is sufficient direct evidence to render the possibility credible. As well, the trajectory of the Clintons' political careers and their mutual dedication to political succes

Objective writing is alive and well

Published by Thriftbooks.com User , 15 years ago
Her Way is ample evidence that objective writing is alive and well. Her Way is a very enjoyable and informative read from two pulitzer prize winning investigative reporters. There is no slant here. That's why some of the other reviewers seem to pan the book. If you hate Hillary, chances are you won't like the book because it says some pretty nice things about her. If you love Hillary, chances are you won't like the book because it says some pretty bad things about her too. The problem with the two latter view points, and much of modern politics, is the singular viewpoint way of thinking. This book is not a political statement, it is an objective portrait of a woman and her record, who has a very real chance of becoming president of the United States for the first time in history. Putting political partisan feelings aside would be a great idea, because that very narrow minded singular thinking may prevent you from reading a great new book about Hillary. There is much insight into the woman, and more importantly, the politician she really is here. F. Scott Fitzgerald said, "The true test of a first-rate mind is the ability to hold two contradictory ideas at the same time." Don't sell yourself short.

Published by Thriftbooks.com User , 15 years ago
I know lots of people who are on the fence about whether to support Hillary Clinton. This book helped me cut through the swirl of information about Clinton and gave me answers about how she operates as a politician, her weaknesses and strengths and what kind of a President she might be. It seems that Clinton has been in the public eye forever, but I still feel like I don't know her. This book really helped clue me in by taking me behind the scenes in a simple, direct way.
Trustpilot
Copyright © 2022 Thriftbooks.com Terms of Use | Privacy Policy | Do Not Sell or Share My Personal Information | Accessibility Statement
ThriftBooks® and the ThriftBooks® logo are registered trademarks of Thrift Books Global, LLC