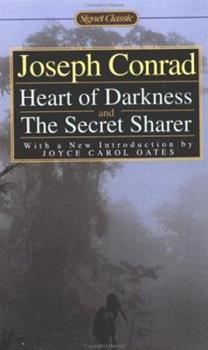 Heart of Darkness and the Secret Sharer (Signet Classics)

In this pair of literary voyages into the inner self, Joseph Conrad has written two of the most chilling, disturbing, and noteworthy pieces of fiction of this century. Heart of Darkness , which first appeared in Blackwood's Magazine in 1902, makes a devastating comment on the corruptibility of humankind. Based on Conrad's own 1890 trip up the Congo river, the story is told by Marlow, the novelist's alter ego. It is a journey into darkness and horror...

Published by Thriftbooks.com User , 12 years ago
Joseph Conrad is an amazing writer; he uses the English language of the late 19th and early 20th centuries beautifully, he describes the colonial world at its apogee, he tells engrossing stories but even his seemingly potboiler plots (such as The Secret Sharer) raise disturbingly serious moral issues. All of these qualities are epitomized in The Heart of Darkness. Can anyone read the Heart of Darkness without thinking of Apocalypse Now? I believe the movie is one of the best adaptations of literature to film but the impact of Conrad's story is as vivid as the movie.

Published by Thriftbooks.com User , 13 years ago
Heart of Darkness and The Secret Sharer by Joseph Conrad Unspeakably beautiful prose. Conrad is an amazing writer. "Heart of Darkness" is a literary masterpiece!

A Classic of British Literature

Published by Thriftbooks.com User , 14 years ago
Joseph Conrad's Heart of Darkness is a classic of British literature. Although Conrad was born in Russia-controlled Poland and did not become fluent in English until he was 21 years old, he demonstrates a tremendous mastery of the English language. Like many of his stories, Heart of Darkness is based on one of Conrad's own adventures (when he captained a steamboat down the Congo River). Heart of Darkness chronicles the adventures of Charlie Marlow, a sailor and wanderer whose adventures lead him into the Congo Free State (under the control of Belgium) during the height of African Imperialism. As Marlow progressed further and further into the Congo, he confronts the growing darkness of mankind. The novel is often mistakenly taught in schools as a great anti-Imperialism novel, but this is not quite accurate. Almost every aspect of Heart of Darkness is ambiguous. Although Conrad clearly criticizes the false claims of humanitarian motives in imperialism, he does not condemn the act of imperialism. It is not even clear whether Conrad considers the Africans to be human. Despite all its ambiguities, the Heart of Darkness is an important novel. At the very least, it paints a stunning and painful portrait of the cruelty and inhumanity of imperialist activities. If Conrad is not condemning imperialism, which is likely the case, then the novel ably portrays the underlying racism (and sexism, incidentally) in European thought during the time period. The Secret Sharer is a short-story included with some copies of Heart of Darkness. The story follows a ship captain who rescues someone from the waters and allows him to stay on his ship, hidden from the ships' crew. The man turns out to have been a sailor on another ship who killed a crew-member during a storm. The captain protects the killer and eventually allows him to escape. Like the Heart of Darkness, the Secret Sharer is an ambiguous tale open to myriad interpretations. Conrad's writing style is, admittedly, difficult at times. Although both stories are short, it takes a considerable amount of time to finish each one. The Heart of Darkness is told almost entirely through narrative which, at times, can become confusing and force the reader to go back and re-read some of the previous passages. Some readers are turned off by Conrad's writing style, while others find it very appealing. Whether you find it challenging or not, however, it is important to read the Heart of Darkness. It is difficult to find a better portrait of the horrors of imperialism.

Published by Thriftbooks.com User , 18 years ago
I would like to address myself specifically to the Norton Critical Edition of this book. The difficulty that many readers face when they pick up a classic, pre-twentieth century novel is that they are not conversant with the history of the times in which it was written. Heart of Darkness can be enjoyed purely as a well written novella, but then you miss so much of what Conrad is trying to say not only regarding the thin veneer of man's social persona (ala Lord of the Flies) but about the evils of 19th century imperialism. What is the story of Colonialism? Do Conrad's derogatory remarks about Blacks make him a bigot? What were Conrad's overall views on life? What were Conrad's personal experiences in the Congo? What did readers think of Heart of Darkness when it was written, and what do the critics think of it today?The Norton Critical Edition gives you 325 extra pages of material written by Conrad and others that provide answers to the above questions. You don't have to read all of these many articles, of course, but a good sampling of them will make your immersion in this famous story all the more enjoyable and meaningful. This is a story that everyone should read, and the Norton Critical Edition provides the best format for the reading experience.

Published by Thriftbooks.com User , 19 years ago
Well, indeed the novel gives the reader an immense feeling of darkness as he/she traverses through the short novel's odyssey. Upon finishing the story, one feels as though one's entire environment is surrounded in darkness. Looking outside at the sunny day, taking a walk, or giving help to charity are all futile attempts to escape the newly digested darkness the reader has swallowed. Conrad is a master of bringing out the dark side in everyone. Marlow knows he can never escape this darkness, yet he makes an impressive attempt through the relating of this narrative itself. Marlow's account of the story is the first time anyone has heard of Kurtz' actual outcome/fate. Thus the narrative gives Marlow the chance to tell this story to a certain group on the Nellie. Since the group (more than 1 person) digests the truth via this narrative they can then in turn outweigh the lie Marlow told to 1 person--Kurtz' Intended. Such an outweighing helps to somewhat free Marlow from the burden he has carried since his prevarication. A must read.
Copyright © 2020 Thriftbooks.com Terms of Use | Privacy Policy | Do Not Sell My Personal Information | Accessibility Statement
ThriftBooks® and the ThriftBooks® logo are registered trademarks of Thrift Books Global, LLC