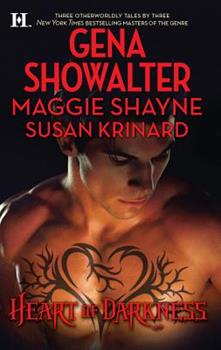 Heart of Darkness: An Anthology (Lords of the Underworld)

From the masters of paranormal romance, three brand-new tales of seduction... The Darkest Angel by Gena Showalter A Lords of the Underworld tale An iron-willed demon assassin, the angel Lysander has never known lust--until he meets Bianka. Spawned from the bloodline of Lucifer, the beautiful but deadly Harpy is determined to lead the pure-hearted Lysander into temptation.... Love Me to Death by Maggie Shayne Twenty-two years ago four teenage boys...

Published by Thriftbooks.com User , 11 years ago
I loved everything about this book, from the cover...love the tat... to every word inside. These ladies really know how to ROCK the paranormal world. I do have to say though that Gena Showalter is my favorite. I know for a fact , because of her skill as a writer, that any book she writes, or even recommends, is a winner. Though I have not read as many of Maggie Shayne or Susan Krinard, (they are both on my "to read more of" lists.I have their books but haven't read all of them yet). I am not going to give a rundown of the contents of the stories because I don't want to accidentally give anything away about the stories, just know, all are really good stories. Definitely a good buy!!!

Published by Thriftbooks.com User , 11 years ago
I loved this book. I am a Gena Showalter fan and I loved the story that she wrote about Bianka Skyhawk and Lysander. It was very well written and I thoroughly enjoyed reading it. I hadn't heard of Maggie Shayne or Susan Krinard before but after reading their stories I was very impressed with them. Their characters and story plots really draw you in and catch your attention and keep you interested. I loved the entire book and all of the author featured in it.

Published by Thriftbooks.com User , 11 years ago
I absolutely loved this book. The characters are believable and interesting and you just don't want to put it down. I appreciate the humor that Gena Showalter interjects in her writing. I'm surprised at how many times I've found myself chuckling or laughing out loud at some of the things she puts in her books - it makes it more real! My only complaint would be that it wasn't long enough and now I've got to wait for the next book!

Published by Thriftbooks.com User , 11 years ago
"The Darkest Angel" by Gena Showalter. Lysander is well known for being unemotional and perhaps the best demon slaying angel. He is one of the Elite Seven warriors of the One True Deity. His current target for death is Bianka Skyhawk, a daughter of a Harpy and a phoenix shapeshifter, but mostly a killer who is of Lucifer's bloodline, but he must remain patient until she breaks heavenly law. Instead his desire for her is killing him as he has never wanted anyone for the many millennia he has lived; yet she is inside his soul. "Love Me to Death" by Maggie Shayne. Twenty-two years ago in Port Lucinda, Maine, the teens (David, Brad, Kevin, Randy and Mark) were drinking cheap booze near the abandoned old Muller Place and commiserating about being dumped or their girls being away when they set it on fire. They did not know that Sierra Terrence took shelter there and died in the inferno. Now over two decades later someone who seems to be Sierra from the grave haunts the five men who killed her and their loved ones. "Lady of the Nile" by Susan Krinard. In 1890 London, the memories of ancient times have led Lady Tameri to believe she is the reincarnation of an Egyptian princess. Leo Erskine knows she is wrong and plans to prove to her she is just a lovely Victorian lady. However, neither the believer nor the skeptic is prepared for the prophecy that ties them in love forever. This trilogy of urban romantic fantasies with differing spins will elate fans especially with the bonuses of a Lords of the Underworld tale and a sequel to Ms. Krinard's Lord of Sin. Harriet Klausner

Published by Thriftbooks.com User , 11 years ago
Summary:From the masters of paranormal romance, three brand-new tales of seduction.... The Darkest Angel by Gena Showalter A Lords of the Underworld tale An iron-willed demon assassin, the angel Lysander has never known lust--until he meets Bianka. Spawned from the bloodline of Lucifer, the beautiful but deadly Harpy is determined to lead the pure-hearted Lysander into temptation.... Love Me to Death by Maggie Shayne Twenty-two years ago four teenage boys were convicted of a young girl's murder. Now, in the form of a beautiful woman, the "victim" is seeking vengeance. And only one man dares to dig into the past to uncover its secrets... and set her free. Lady of the Nile by Susan Krinard Lady Tameri believes herself to be the reincarnation of an ancient Egyptian princess, and Leo Erskine has set out to prove her wrong...never dreaming that the two of them are about to discover a prophecy that will bind them together forever. The Darkest Angel I have been feinding for a 'Lords' story for awhile now, and I definitely was not disappointed. Gena Showalter has a very specific writing style, I could recognize it even without knowing she wrote it, and that's an awesome thing, in my opinion. I loved this story, it was sweet, sizzling hot and just cute. I am glad Gena Showalter is expanding her characters as well...we now have sexy angels, and probably more demons to play with. Great story, loved the entire thing. Love Me To Death This was the first time I had read anything by Maggi Shayne. I think I definitely found a new author to read, this story was great. It wasn't easily predictable and was incredibly sexy and drawing, I was in for the long haul from page one. The characters were well developed for such a short story and I can't wait to read the series that is related to it, when the author starts putting them out. Lady of the Nile This was a short sweet and spicy historical/paranormal-ish romance story. I quite liked it, I really like Leo's character, even if he is a bit stubborn for his own good. I liked these two together as well. I will have to find more books by Susan Krinard. I like her writing style. Received from: Netgalley
Copyright © 2020 Thriftbooks.com Terms of Use | Privacy Policy | Do Not Sell My Personal Information | Accessibility Statement
ThriftBooks® and the ThriftBooks® logo are registered trademarks of Thrift Books Global, LLC