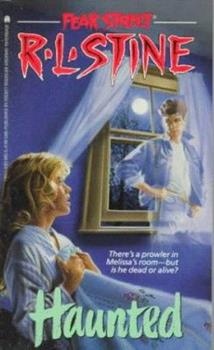 (Book #7 in the Fear Street Series)

- R.L. Stine has more than 41 million copies of his Fear Street books in print

Haunted by a prowler...

Published by Horror crazy , 1 year ago
One of the things I really love about the Fear Street series is that some of the books are genuinely supernatural tales, something I, personally haven’t found enough of in 90s YA horror books. Thank you, R.L. Stine for rectifying this situation by including in your Fear Street series, books about werewolves, vampires, ghosts, supernatural powers, and other paranormal phenomena that are actually REAL in the context of the stories that actually feature them. Haunted, which I feel should have been called “The Haunted”, is about Melissa, who is not the only Fear Street resident who is worried about the “Fear Street Prowler.” Everyone is, with good reason, frightened and concerned about the possibility of their home being invaded by the mysterious criminal—or criminals—who always steals valuables from each house. They are especially fearful that he could decide to do something worse one night. As for Melissa, she’s about to discover that the Fear Street Prowler isn’t the only thing she should be afraid of. One night, she is alarmed by the discovery of a ghost standing next to her bed, the ghost of a dead boy. The already scary situation takes a terrifying turn when the angry ghost accuses her of killing him, which Melissa has no memory of doing. She’s certain that she’s never even met the boy! As strange, eerie things begin to happen to her, events inevitably lead to another face-to-face encounter with the spirit. Desperate to end the terror, Melissa realizes a bizarre possibility: The ghost is from the future! Her suspicions are confirmed when she encounters him, not the for the first time, as an actual living person! Knowing her incredible theory is true, Melissa offers to help him by trying to find a way to prevent his death. After all, like anyone else, the thought of actually killing someone terrifies her. I like this story because of the unique take on the traditional ghost story. The idea of a ghost from the future trying to prevent his death from happening is very intriguing. While I find Haunted scary, it’s not as scary as some other Fear Street books, but it’s enjoyable and very suspenseful. A great book that I recommend for fans who love a ghost story with a twist!

Finally a book with a supernatural being!

Published by RV The Book Slayer , 1 year ago
Haunted has finally broken the mold and given us a monster that isn't human. Melissa lives on Fear Street and I am kind of mystified why we haven't heard about her before. She is best friends with Della (from The Overnight) and some of our previous high school characters, and has lived on Fear Street for the last five years. At the end of the summer, Fear Street is experiencing a string of break ins. They have deemed the culprit the Fear Street Prowler and the residents are worried and on high alert. One of these houses is, of course, Melissa's. So when a ghost boy starts to pop into her room, she panics. Now I don't know about you, but if a random ghost popped into my room and threatened to kill me, I'd call my psychiatrist. But convinced she isn't crazy, Melissa reasons with the ghost. She will find out who killed him in exchange for her safety. Now this story's romance really bothers me. Buddy is painted as a "typical" teenage boy that is self-centered and completely heartless to what Melissa is going through. He has put his hands on her. Yes, grabbing a wrist to prevent Melissa from leaving is abuse. And as a DV survivor, I worry that Stine doesn't give these actions their importance. Again, we are 30 years in the future and hindsight is 2020, so I can't be too upset at him. I enjoyed the ghost aspect in this story and the ending was satisfying.

Can Melissa stop a ghost from killing her?

Published by Thriftbooks.com User , 15 years ago
Having read a few books from the Fear Street series, I decided to read a few move, including "Haunted" for fun. There is a prowler in Fear Street who is breaking into everyone's houses and robbing them. Melissa Dryden, a teenager living in Fear Street is scared that they prowler might attack her family one day, and gets terrified when small things like tree branches hit her windows. Soon, she starts experiencing strange things like a shadow prancing in her room, her new car steering out of control, and someone trying to push her out of her bedroom window. No one believes her since they think she is imagining it because of her fear of the prowler. However, she knows that there is a ghost in her room trying to kill her, and she tries to get to the bottom of it by figuring out who he is, and how she can prevent him from killing her. Although the ending was a little predictable, I still enjoyed reading this book because it had a lot of twists and turns. I found it really intriguing during the middle where Melissa is confused as to whether the ghost is really a ghost or not. What I also liked about it was the fact that it was simple enough to enjoy. Some of Stine's Fear Street stories tend to be really confusing, especially towards the end, but this story was fast paced and not complicated. On the whole, I would rate this as one of the better Fear Street books that Stine has written. I would recommend this to anyone who likes reading ghost stories or is a fan of R. L. Stine's work.

Published by Thriftbooks.com User , 17 years ago
I've read some good books and some bad books, but I have never read a book that sucked me right in and jumped to the main part like Haunted by R.L Stine. I enjoyed reading this book because it gave me the chills. For example, when Melissa is in her room asleep and wakes up to find a guy standing beside her bedroom window. When her parents come into her bedroom they can't seem to find any one inside or outside her bedroom window. Could she have been dreaming it or was it real? What about when Melissa is driving to her friend's house and hears her named whispered three times in her ear? Once she starts to freak out something takes control over her steering wheel and swerves to the right. She tries to gain control of the wheel when it swerves to the right again. Who or what is taking over the wheel when Melissa is all by her self in the car? Through out the book Melissa tries to find out who this mysterious guy is and what it is he wants from her and why? R.L Stine has written other books but not as good and mysterious for teen as Haunted. That is why I enjoyed reading this book; all it's excitement and mystery.

A really good story by R.l Stine, more a romance

Published by Thriftbooks.com User , 22 years ago
I'm one of those ex- R.L Stine Holic.. I have 125 books of his (embarrassed expression on face). It starts off weel, and as it goes through to the end it is very well written. It has a great ending.. if only it hadn't of happened.. the thing to the ghost cause he rocked :) *shameful wink* ok.. yeah and grab some tissues, waterworks alert :) Also, if you are an ex- R.L.stine reader and are an older reader, 16-18, and arelooking for something that is more in your range, try his book, Superstitions, Very good book :)

Published by Thriftbooks.com User , 23 years ago
This was one of the best books I have ever read. I really enjoyed it. You too will love it although it is sad in the end. I do not want to spoil it for you so enjoy.
Copyright © 2020 Thriftbooks.com Terms of Use | Privacy Policy | Do Not Sell My Personal Information | Accessibility Statement
ThriftBooks® and the ThriftBooks® logo are registered trademarks of Thrift Books Global, LLC