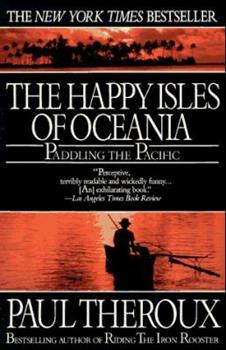 "Possibly his best travel book...an observant and frequently hilarious account of a trip that took him to 51 Pacific Islands." TIME Renowned travel writer and novelist Paul Theroux has been many places in his life and tried almost everything. But this trip in and around the lands of the Pacific may be his boldest, most fascinating yet. From New Zealand's rain forests, to crocodile-infested New Guinea, over isolated atolls, through dirty harbors, daring...

Published by Thriftbooks.com User , 16 years ago
In 1980 I proofread a magazine excerpt of a Paul Theroux book. It began with his getting up early to catch a train from Boston to begin a journey to Patagonia. Who cares how early this bloody New Englander had to get up or what he had for breakfast? I'd thought Patagonia was a mythical country. I guarantee you it wasn't in my geography book. Turns out it's part of Argentina. Big deal. But the guy is a real writer. In The Happy Isles, he recounts the tale of how he brought a folding boat, about the size of a big suitcase, to every Pacific island you've ever dreamed about and paddled around them all. Forget those islands -- Theroux says they are mostly full of lazy, suspicious people who stuff themselves with imported junk food. Some are Christian religious fanatics, some are vicious pagans, and some are both. The first two chapters are on New Zealand, and I imagine those folks would shoot Theroux on sight if he had the temerity to return. He was not complimentary. Theroux is not Mr. Sweetness and Light, but that's all the more enjoyable as he demolishes the images of tropical paradises, whether in Meganesia, Melanesia, Polynesia, or Hawaii. Stay home! Stay home, pour a Mai Tai, and enjoy this delightful putdown.

Published by Thriftbooks.com User , 18 years ago
I lived in Suva (the capital city of...) Fiji for a year during and just after that island nation's first 'bloodless coup d'etat" in 1987 (good ol' Sitivini "Steve", to his closest pals, Rabuka, and his racist henchmen- the leader of that response to a native India-Indian/Fijian man having won the last democratic election held in that archepelago) and on up into a remote village in Ra for the next year as a health education Peace Corps Volunteer.It took me all those 2 years living fully immersed within Fijian culture and among an interesting( and it must be said oddly racist, even amongst themselves) bunch of humans as one is ever likely to meet - to start to make sense out of their very complicated ways and mores. Paulie T. got to the crux pretty much immediately.Personally, I got to hate running into locals who had recently encountered tourists - as it always made interactions more complicated for me. Thus American, Aussie and Japanese toursists were a big headache for me. They would over pay for everything and scamper about scantily clad - tweaking at the Fijian moral compass, developed, ironically, directly from the teachings of those good ol' late 1800's Christian missionaries - who, at least had a hand ;-) in helping Fijians stop eating each other.He nailed the Fijian culture - and I am assuming he does the same to the others described. Who said traveling was pretty? Sure, it can be if one takes great care to insulate oneself from the local actualities - but where's the fun in that?!I travel to see how the rest of the world lives. Although, one time I went to the b.v.i. to lay about on the beach completely cut off from reality - and you know what? THAT ain't half bad either!

Published by Thriftbooks.com User , 22 years ago
Yes, you readers are certainly right. Theroux does, at certain times, call forth from the fictional realm to completely characterize certain people that he encounters along the way. We should in no way dislike the book for this reason. I felt that it presented me with a clear picture of life in the Pacific, and in particular, proves previous sterotypes both true and false(I particularly love his references to the falacies present within Melville's Typee as a way to describe the Marquesians). Also, I found his representation of American counter-culture as an influence on Samoan culture quite an effective means of relaying to us a sociological message: we learn directly how society influences the individual, and how, in turn, he influences the society. A remarkable read in my opinion....

Published by Thriftbooks.com User , 23 years ago
Paul Theroux takes a close look at the places and people he visits. He is very discriptive, but yet manages to entertain and capture the reader. Once I started the book, I did not want to put it down. It's a must for everybody who wants to travel to the South Pacific.

Published by Thriftbooks.com User , 24 years ago
Theroux's book is very well written, but having gone to many of the places in the book, and indeed met the very same people within the book, I have to say that it is simply just fiction. So many people are charicatured to the point of fantasy, which I am quite sure is calculatingly done to sell more books, that it all has to be taken lightly. As a book it is a good read, but it is not a reflection of reality. In any event, I keep reading his writing
Copyright © 2020 Thriftbooks.com Terms of Use | Privacy Policy | Do Not Sell My Personal Information | Accessibility Statement
ThriftBooks® and the ThriftBooks® logo are registered trademarks of Thrift Books Global, LLC