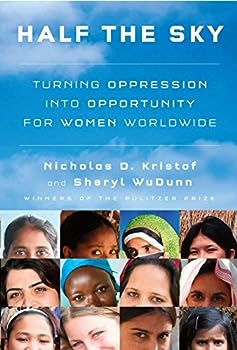 Half the Sky: Turning Oppression into Opportunity for Women Worldwide

#1 NATIONAL BESTSELLER - A passionate call to arms against our era's most pervasive human rights violation--the oppression of women and girls in the developing world. From the bestselling authors of... This description may be from another edition of this product.

6 ratings
Write a review
Published by Thriftbooks.com User , 7 years ago
very good condition, just like a new book. No damage during the delivery.

Women, as men, are imbued with a creative potential

Published by Thriftbooks.com User , 13 years ago
Albeit I am attuned to current events, I have not known the extent of the atrocities, committed against females in many Asian and African countries, as narrated in Half the Sky. The authors, Nicolas Kristof and his wife Sheryl WuDunn, have tirelessly documented episodes of human suffering. They describe the enslavement of young girls and women in brothels, genital mutilation, gang-rapping, honor killing and other deprivations. Women, especially those of lower socioeconomic status, lack essential medical care and have no idea about the existence of birth control availability. It is surprising to me to learn how many people are being repressed because of their gender. The Chinese proverb that states "women hold up half the sky" makes as much sense to me as Hitler's assertion that women fit only for housekeepers and breeders. I could never find a logical explanation why the German forbade me to attend school and I am saddened to learn that so many young girls nowadays are being deprived of basic education. I had been repressed and oppressed during the German occupation of Poland 1939-1945. As a teenager, I had seen the worst that man can do. I saw the Germans looting, expropriating, beating, torturing, shooting, hanging, burning alive, babies choked or smashed to death, starving and other unimaginable acts of extreme wickedness carried out against innocent people. I witnessed and experienced enslavement in enforced labor and concentration camps. The most decent and compassionate person in my life was my stepmother, a female. The German who risked her life for me, thirty times, was a female. After the liberation from concentration camps, the first person who had offered me shelter was a German female. Although there were some vicious German female guards in Auschwitz, and in other concentration camps, most German women were less inclined to savagery than men. Adolph Hitler, Joseph Stalin, Mao Tse Tung and Pol Pot, the most infamous dictators, in recent history, who had caused the death of tens of millions, were all males. When women are mistreated, men are intrinsically adversely affected. When women, who are the half of the population, are marginalized it affects adversely the entire population. Kristof and WuDunn deserve our gratitude for sharing their observations and personal interviews with so many affected victims and their benefactors. The authors bring to light the devastating problems facing millions of girls and women, but simultaneously with suggestive practical solutions to those problems. Education could bring emancipation for all women. The U.S. allocates $1 billion for every 1,000 troops deployed in Afghanistan. I am not sure that such additional expenses will grand us more security here in the U.S. and/or bring more democracy to the Afghan people. I am however convinced that $1 billion invested in providing education to thousands of Afghan or Pakistan children and adults about health, hygiene, human rights, women and girls' rig

Changing the world one book at a time

Published by Thriftbooks.com User , 13 years ago
This book is an essential dose of reality for those of us that are lost in the comfort of our own lives. It not only informs, it also motivates us to do something about an ancient and pervasive global problem. The story of individuals whose strength and will enabled them to overcome their dire circumstances,and the accomplishments of rescuers who were equipped with compassion and drive created narratives so compelling and moving that it will mobilize anyone for the cause - unless of course if your heart is truly made of stone. I also find it helpful that the book mentioned various organizations and hospitals that are heavily involved with helping women in oppression. This information makes it easy for anyone to donate or help out if he/she wants to. On a personal note, reading the stories of some of these truly strong individuals inspired me to make the most of the opportunities I have in front of me. Not only that I should be thankful for all that I have, but BECAUSE I can, I now have a responsibility to do what I can to help. It is still difficult for me to believe that a lot of these incidents can happen in this day and age, and that people suffered this much while we go about our day worrying who won the latest sporting events or what the latest fashion trend is. (I'm not against either sports or fashion, but it really puts life in perspective!) In summary, the book has the pattern of telling us a story of a suffering individual with no way out on their own, then the story of one who was willing to take action to help .... and that has made all the difference. (well not every story is a success story... but that's reality too) The stories are real, the people are real, the problems are real. It is heart breaking to see how vast and cruel the problems are - but there is hope. We can be part of that hope, when we are willing to see and do something about it as well. Start by reading this book... it really will change your world, it changed mine.

AN ABSOLUTE MUST READ FOR ANYONE WHO CARES ABOUT HUMAN RIGHTS

Published by Thriftbooks.com User , 13 years ago
I was able to read most of an advance copy of this book before Bill Drayton (founder of Ashoka: Innovators for the Public) snatched it away and ran off with it on his annual 2-week hiking trip to the mountains. I think this has to be the most important book - not just for women's rights globally but for human rights - published in my memory. Kristof and WuDunn weave together a most compelling story of how culture and customs historically suppress women. They tackle many tough, taboo topics - for example honor killing. But more importantly, they champion the stories of heroic women worldwide wholly committed to changing the many evils of the status quo. What is more, they posit a kind of general framework theory that the really important advances in human rights that are going to be made in the near future are going to be brought about by these entrepreneurial pioneering women. In essence, that the backbone of the human rights movement and of real change across all societies is going to be a direct function of brave women who give themselves permission to say "NO" to thousands of years of (to most Westerners) unimaginable oppressive cultural customs and who take it upon themselves to lead to a new way. Once you have read the book, it is very hard, if not impossible, to disagree with Kristof and WuDunn's general theme. To wit, the brave women of Iran who took to the streets to protest the results of the recent election. Among many other "super" women, HALF THE SKY spotlights the following inspirational Ashoka Fellows: · Sunitha Krishnan (India), founder of Prajwala, a citizen sector organization in Hyderabad, India, fighting forced prostitution and sex trafficking, rescuing women and children from sexual exploitation, incestual rape, sexual torture, and abuse in prostitution. Her organization helps former prostitutes learn vocational skills so they can move into new careers. "Prajwala" means "an eternal flame". · Sakena Yacoobi (Afghanistan), founder of the Afghan Institute of Learning, a citizen sector organization providing teacher training to Afghan women, educating and fostering education for girls and boys, and providing health education to women and children. Her organization also runs fixed and mobile health clinics that provide family planning services. Sakena holds the distinction of having been Ashoka's first Afghan Fellow. Educating women and girls was banned under the Taliban and is controversial under Islamic law. · Roshaneh Zafar (Pakistan), founder of Pakistani microfinance lender, Kashf. A former World Bank employee, she was inspired after a chance meeting with Muhammad Yunus, founder of Grameen Bank. "Kashf" means "miracle" and Kashf is indeed fostering a miracle by leveraging microfinance to women to transform the role of women in Pakistani society and bringing about a poverty-free world. To date, Kashf supports 305,038 families in Pakistan, has disbursed $202 million, and has 52 branches nationwide. I am not alone in my

We should all be reading this book!!

Published by Thriftbooks.com User , 13 years ago
This may be one of the most important books I have ever read. I heard Mr. Kristof on the radio and the title caught my attention. After the first page, the book caught my heart. This is such a well researched and well written book that I could not put it down. We all realize that women the world over face challenges that women in the US never have to face. Prepare to have your eyes opened when you open this book. I dare you not to be moved, and I dare you to do nothing after reading it. The women who share their stories here are some of the most courageous and strongest women ever, and they are changing their world for the better.

Published by Thriftbooks.com User , 13 years ago
When I read an advance copy of this book, I was so stunned that I contacted the authors and told them I wanted to do whatever I could to help get the word out. It is a compelling and important work -filled with riveting anecdotes and a powerful, optimistic message about the opportunity we all have to support a movement that has the power to transform lives around the world. Read the book, and then go to [...] to learn more about how Lifting Women Lifts the World.
Trustpilot
Copyright © 2022 Thriftbooks.com Terms of Use | Privacy Policy | Do Not Sell My Personal Information | Cookie Preferences | Accessibility Statement
ThriftBooks® and the ThriftBooks® logo are registered trademarks of Thrift Books Global, LLC