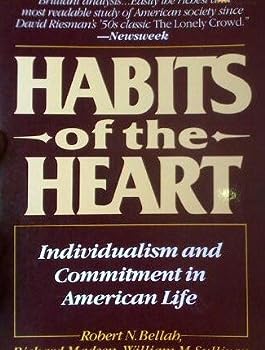 Habits of the Heart

"The contemporary benchmark from which to look back and look forward in the continuing inquiry about American character."--Daniel Bell"One of the most penetrating examinations of American individualism I have seen. . . . I hope it will be read and debated for years."--Christopher Lasch, author of "The Culture of Narcissism

A Wise and Profound Reflection on American Culture

Published by Thriftbooks.com User , 15 years ago
This is a brilliant, deeply thoughtful, open-hearted book, one of the ten or twelve most important studies we have so far of the culture of the United States. Those who take the time and make the effort to read it carefully will learn a lot not only about American history and society, but also about their own private thoughts and fantasies and the background assumptions of their everyday lives. The dismal state of American education is the main thing you can learn about in most of these reviews. This book has limitations. The most obvious: it's about white/Anglo middleclass Americans. But the only sensible response to the book is still gratitude. If you haven't read it, read it.

Sorting It All Out

Published by Thriftbooks.com User , 18 years ago
HABITS OF THE HEART is a tour de force whose insights into America are as relevant today as they were nearly twenty years ago when the book was published. It was hailed at that time as an instant classic of sociology, and compared to such influential works as MIDDLETOWN and THE LONELY CROWD. If anything, its insights are even more pertinent now. The subtitle "Individualism and Commitment in American Life" is the main trope guiding the book, a bipolar perspective that neatly describes the American inability to reconcile the "utilitarian individualism" of Hobbes' "war of all against all" as exemplified in the liberal economic philosophy that grew up with America, with the "expressive individualism" of Whitman and Emerson which developed as a reaction to (in Henry James'' words), the "grope of wealth." The final chapter which elucidates "Six American Visions of the Public Good" describing them as three pairs of conflicting visions: "The Establishment versus Populism," "Neocapitalism versus Welfare Liberalism" and "The Administered Society versus Economic Democracy" is the best example of this dualist view of America, but as Bellah and his fellow authors describe it, these competing visions often hold as many similarities as differences. Specifically, from the latter 19th century until the depression both The Establishment and Populists recognized there was and needed to be a moral component in American public life. The Establishment side was represented Andrew Carnegie's "Gospel of Wealth," while on the Populist side were economic socialists such as Eugene Debs. The mores of the that time, de Toqueville's "habits of the heart," were still moralistic, still partaking of the ideal of the legacy of Jefferson's freeholding citizen even capitalism shook America off its foundations. Of the next pair, Neocapitalism (which rose to its greatest heights in the form of Ronald Reagan) and Welfare Liberalism (exemplified by FDR), while they have different means look to the same ends according the authors. The first seeks to empower citizens through the "war of all against all" and keep the country competitive by unraveling the safety net. Slackers and failures must not be encouraged to take advantage of the winners because it is morally debilitating for society as a whole. Welfare Liberalism on the other hand believes that the net should be stronger because it has less confidence in the Market God believes in better chances and social justice, but still views Americans as individuals who must be encouraged in the Hobbesian war. Of the last two visions, Felix Rohatyn, is the poster boy for the Administered Society -- a continuation of the Progressive ideal of scientific "mastery" a la Lippman, while Michael Harrington represents Economic Democracy. As compared to Rohaytn, who endorses a "partnership" of elites who work to adjust and balance the multiplicitous machine of political, economic and social interests, Harrington would spread out the decisio

Published by Thriftbooks.com User , 21 years ago
Habits of the Heart describes and analyzes the current American Character both in great breadth and with great depth. It gave me a lot to think about. And it gave me a framework to use for my thinking. Bits and pieces of information, some of which I'd noticed before but discounted, are fit into both a historical and a current context.The book is not a call to arms, nor does it present a list of suggestions for how to behave. The authors' direct opinions are circumscribed to the few pages of the Conclusion and the Appendix. And many of those comments have to do with either how academic sociology should do research or how the book was written. How five authors jointly wrote a single book sounds like an interesting story, but isn't commented on any further than to say it happened and it was a good thing.As analysis it really does rank right up there with Alexis de Toqueville's Democracy in America and David Riesman's The Lonely Crowd. As political tract it isn't in the race.

Interviews with Americans tell the truth about Individualism

Published by Thriftbooks.com User , 22 years ago
This book is about the inevitable conflict between American Individualism and the fact that humans are by nature social. We hunger for relationship yet we want it only on our terms. Bellah and his team of reseachers take on the enormous task of interviewing people from all over the country and the results of these interviews are presented factually and then analyzed. Whether one agrees with the book's conclusions or not, the interviewees speak for themselves, and they speak for a majority of Americans today who are often torn by conflicting authoritative messages and motives from without and within. This book is a marvelous and sometimes unsettling mirror into contemporary American society.
Copyright © 2020 Thriftbooks.com Terms of Use | Privacy Policy | Do Not Sell My Personal Information | Accessibility Statement
ThriftBooks® and the ThriftBooks® logo are registered trademarks of Thrift Books Global, LLC