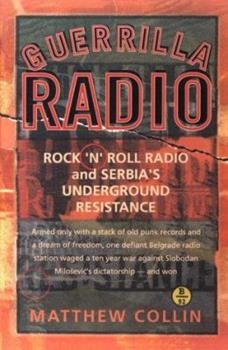 This is a book about a group of Belgrade's young idealists and their pirate radio station B92, who began with the naive desire to simply play music, but ended up facing two wars, economic sanctions, violent police and government crackdowns, the attentions of armed gangsters and neo-Nazi politicians, and ultimately became the leaders of an opposition movement forced into exile. Before Milosevic was finally ousted in October 2000, B92 would be shut...

Published by Thriftbooks.com User , 16 years ago
Even though this book is now out of print, I still feel the need to write this review in addition to the other excellent one posted here. Guerrilla Radio is the inspiring story of B92 radio station and their decade long quest to end the regime in Serbia while at the same time offering the public hope. As a student of international relations, it also offers a fascinating look at what really happens to the resistance fighters without weapons when temporary "interventions" by foreign powers end up making situations much worse than they already were. If you can get your hands on a copy of this book, BUY IT IMMEDIATELY.

An outspoken voice against the genocidal Serbian dictator

Published by Thriftbooks.com User , 19 years ago
Guerrilla Radio by Matthew Collin (London Editor of "The Big Issue") is the incredible but true story of the Serbian pirate radio station B92. This was an unlicensed radio broadcast station which began in the late 1980's for the simple purpose of playing music, but it quickly evolved into become an outspoken voice against the genocidal Serbian dictator Slobodan Milosevic. A powerful story of people's refusal to be silenced, culminating with the eventual end of Milosevic's regime in October 2000, Guerilla Radio is a strongly recommended and revealing example of the determination of human will and spirit against all efforts to shut it down, disrupt its broadcasts, and otherwise silence an underground resistance to an horrific tyranny.
Copyright © 2020 Thriftbooks.com Terms of Use | Privacy Policy | Do Not Sell My Personal Information | Accessibility Statement
ThriftBooks® and the ThriftBooks® logo are registered trademarks of Thrift Books Global, LLC