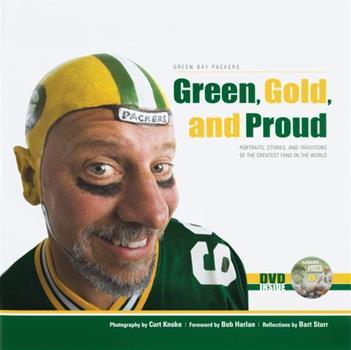 Green, Gold, and Proud: The Green Bay Packers: Portraits, Stories, and Traditions of the Greatest Fans in the World [With DVD]

With a blend of portraits, words, and pictures, this book gives Packers fans their due. Green, Gold, and Proud is the ultimate tribute to legions of Packers fans in Wisconsin, across the United States, and around the world. Packed with hundreds of vivid, full-color photos that capture the true Cheesehead experience, Green, Gold, and Proud takes fans from the raucous excitement during a game to the green and gold living rooms and shrines across the...

Published by Thriftbooks.com User , 16 years ago
Designed and photographed by relatives of Mel Knoke, the first inductee into the Packers Hall of Fame, Green, Gold, And Proud: Portraits, Stories, And Traditions Of The Greatest Fans In The World is a stunning photo documentary of and tribute to fans of Wisconsin's football team, the Green Bay Packers. Exploring the enthusiasm of fans who come to the Packers' training camp and summer practices, and filled with candid essays and testimonials as well as gorgeous full- page color photography of fans at home or dressed up in pro-Packers regalia, Green, Gold, and Proud is unquestionably a labor of love, revealing the bonds of excitement and enthusiasm that come from cheering the efforts of a beloved home state team. An accompanying 80-minute DVD chronicles the history of Lambeau Field, sharing the players, games, coaches, and moments that have marked the Packer's path to victory. A visually appealing giftbook, perfect for Packers fans.

Published by Thriftbooks.com User , 16 years ago
Green, Gold, and Proud sets new standard for books about Packers fans Many books have tried to capture what it means to be a Packers fan. Few, if any, have actually succeeded. Until now. Green, Gold and Proud: Portraits, Stories, and Traditions of the Greatest Fans in the World by Curt and Kyle Knoke is sure to become the standard by which all future books about Packers fans will be judged. If it's true that a picture paints a thousand words, then this book with its hundreds of vivid, full-color photographs speaks volumes. Never before has the panorama of fans comprising Packers Nation been captured so colorfully and in such exquisite detail. This labor of love incorporated the talents of both men on a scale never before attempted. Curt, 65, is the co-founder of Image Studios, Appleton. He retired in 1996 after a long and prosperous photography career spanning more than three decades and now lives in Gresham, Wis. His nephew, Kyle, 38, is a creative director with Allen/James Design, also of Appleton. Since Curt's retirement, the two have teamed up to produce books that celebrate people, enviroments and community. One of their joint creations, a composite of "environmental portraits" featuring Shawano County, helped raise more than $50,000 for the Shawano Area Community Foundation. Curt shot the photos while Kyle did the graphic design. Their second book, The Art of Labor, used high quality black-and-white photos to turn the spotlight on the craftsmen, ironworkers and masons who labored to produce the Fox Cities Performing Arts Center. In the fall of 2003, Kyle and Curt began deliberations that would lead to their greatest and most challenging project yet: a book about Packers fans, arguably the greatest fans in the world. Notably, it was Mel Knoke-Curt's uncle and Kyle's great-uncle-who was the first fan to be named to the Packers Fan Hall of Fame. The project began simply enough in 2003 with a few sample photographs taken during training camp and in the stadium tailgate area. Having inherited Mel's tickets, they also took photographs at two regular season games, capturing an historic moment when the Packers won the divisional title thanks to an improbable come-from-behind victory by the Arizona Cardinals in the final game of the season. Fortune seemed to be on their side. With a few sample photographs and concept for a book in hand, they approached the Packers' marketing department, which was looking to promote the team's fans now that the stadium construction project was drawing to a close. The Knokes presented their subject matter-the fans-against white, seamless backgrounds that were indeed eye-catching and clearly thought provoking. "We really wanted to focus and celebrate the fans, their personalities and their enthusiasm," said Kyle in explaining the white, "sweep" backgrounds that comprise perhaps 75 percent of all the photos in the book. "By stripping away the en
Trustpilot
Copyright © 2022 Thriftbooks.com Terms of Use | Privacy Policy | Do Not Sell or Share My Personal Information | Accessibility Statement
ThriftBooks® and the ThriftBooks® logo are registered trademarks of Thrift Books Global, LLC