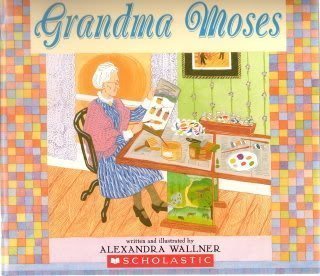 This description may be from another edition of this product. This inviting picture book covers the childhood, courtship, and mature years of Anna Mary Robertson, the self-taught artist whose cheerful, upstate-New York landscapes and scenes of family gatherings...

Published by Thriftbooks.com User , 13 years ago
We really liked this book. It is a biography of Grandma Moses' life. She was always interested in painting but really did not get to do too much until late in her life. We read this book for reading but would also make a good history book for the late 1800 - early 1900. It could also be used for art. She did not use expensive materials in her art and she painted the life she knew. Could be followed by an art project. Recommended for ages 6-10 years.

The Life of Grandma Moses

Published by Thriftbooks.com User , 16 years ago
Grandma Moses portrays the life of artist Anna Mary Roberston. Under her father's influence, during childhood, Anna Mary became interested in the arts and her passion for painting intensified as she grew. The story moves the reader through the various stages of Anna Mary's life, discussing her dreams and desires and culminates with her success as an artist. Even though this book is geared towards beginning readers it is appropriate for readers of all levels, as it inspires individuals to follow their dreams, no matter what obstacles they may have to overcome.

Published by Thriftbooks.com User , 17 years ago
Filled with sprightly, colorful illustrations reminiscent of the work of the artist it celebrates "Grandma Moses" is an ideal way to introduce youngsters to art. Each painting catches the eyes with its bold shades and scenes of earlier days, while the text traces the artist's inspiration and the development of her paintings. Born Anna Mary Robertson in 1860 the artist who would some day gain fame as Grandma Moses was raised on a farm in Washington County, New York. She was a happy child who enjoyed making believe, cutting out newspaper paper dolls and painting eyes on them with blue laundry rinse. Even as a young girl she liked to paint - scenes of the countryside. However, there was work to be done on the farm so she had little time to indulge her hobby. At the age of 12 she left home to work as a hired girl for a family. Later, as a young woman working for another family she met their hired man, Thomas Salomon Moses. She was to write of that meeting in later years: "In those days we didn't look for a man with money, but for a good family, good reputation - many of the boys were chicken thieves." The pair married and moved to Virginia's Shenandoah Valley. She would have loved to have painted that scene but she was kept busy churning milk into butter to pay for their cows. After their children were born the family moved back to New York where Anna Mary's days were full of household chores and tending to her children. It was only after she was widowed and the children were grown that she could turn once again to her first love - painting. Once her work was recognized she became known as Grandma Moses, and lived to see her work hung in museums throughout the world. - Gail Cooke
Copyright © 2020 Thriftbooks.com Terms of Use | Privacy Policy | Do Not Sell My Personal Information | Accessibility Statement
ThriftBooks® and the ThriftBooks® logo are registered trademarks of Thrift Books Global, LLC