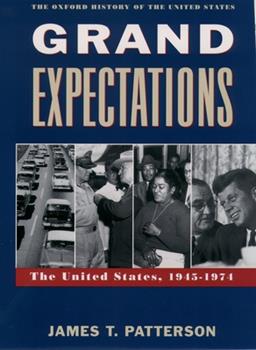 Beginning in 1945, America rocketed through a quarter-century of extraordinary economic growth, experiencing an amazing boom that soared to unimaginable heights in the 1960s. At one point, in the late 1940s, American workers produced 57 percent of the planet's steel, 62 percent of the oil, 80 percent of the automobiles. The U.S. then had three-fourths of the world's gold supplies. English Prime Minister Edward Heath later said that the United States...

Very good book of the period

Published by Jack , 1 year ago
Oxford history of the united states series is one of the best series i have ever read. Not one volume is under four stars and two battle cry of freedom and freedom from fear are five star reads but you have better devote a lot of time to read the series for they are long but well worth it

Narrative History at its Best

Published by Thriftbooks.com User , 13 years ago
This is a wonderful work of narrative history and a worthy sequel to David Kennedy's brilliant "Freedom from Fear," which covered America in the Great Depression and World War II. Like Kennedy, Patterson tells the tale chronologically, which is really the only way to narrate history. But also like Kennedy, he organizes the narrative around socio-culutural as well as political, economic, and diplomatic developments. And also like Kennedy, he has one simple overarching theme. In Kennedy's case, the theme was that the quest for security and inclusiveness explained the era of 1929-45. Patterson's theme is that America in the period of 1945-74 was characterized by grand expectations. Rising expectations are what cause revolutions, to borrow from Crane Brinton. And there was certainly much turmoil in this period that resulted in permanent and beneficial change -- such as civil rights, change in gender roles, environmentalism, the creation of a social safety net. But another result of grand expectations is hubris -- the country's expectations were too high and America set itself up for a fall. The nation ran up against resource limitations resulting in the first oil shock in 1973, the inability to have a guns-and-butter economy, and the limits of power that the Vietnam experience demonstrates. Patterson weighs the evidence and historiography judiciously to arrive at what is probably the conventional wisdom of American historians, a slightly left of center group. That conventional wisdom includes a useful paring down of Truman's reputation to reflect his narrow-mindedness and surprising tentativeness and indecisiveness early in his tenure; Eisenhower's extraordinary skills in wielding Presidential power and in keeping the idiot right in check (too bad they don't make Republicans like him anymore); Kennedy's arrogance and failings at domestic policy; Johnson's brilliance at passing legislation but fatal problem with credibility; and Nixon's genius at politics that was his strength and downfall. I tend to be convinced by the conventional wisdom, except for the treatment of Kennedy, who I believe is short-changed. To say that Kennedy did not grow in office or would not have handled Vietnam differently than Johnson is to ignore the profound effect that the Cuban Missile Crisis had on Kennedy. One only has to read his American University speech to appreciate this. Also, Kennedy does need to be given more credit for his handling of the missile crisis, despite the current fashion of criticizing his approach as reckless. To say that he should have confronted Khrushchev privately is to ignore that public pressure was the only thing that was going to force Khrushchev to back down. Moreover, of all the post-war Presidents, I would only trust Eisenhower and Kennedy to handle the crisis right. The other guys would have stumbled into World War III. However, while "grand expectations" is in some respects an intriguing and worthwhile way to a

Oxford does it again!

Published by Thriftbooks.com User , 15 years ago
Whenever you pick up an Oxford history of the United States you expect an attention to detail and excellent prose. This book does not disappoint. It covers the salient history during the time period and utilizes the top scholarship to do so. From urban history to social movements in the fifties and sixties this book covers everything. There is some repeating but that is to be expected when writing a book of this size. The coverage on the shifts in political viewpoints and the hope of the nation makes for fascinating reading. Patterson makes an interesting point with his ideas of the United States having Grand Expectations. His conclusions that go through what expectations fell short and what were filled puts the entire time period in a different and interesting perspective. This is a must read for any one interested in post world war 2 history or trying to understand how America arrived at where it is today.

A well-balanced overview of America's most troubled era

Published by Thriftbooks.com User , 19 years ago
James Patterson has assembled the most comprehensive survey of contemporary American history. With the Cold War as the backdrop, he guides the reader through a tumultuous period that took in two wars and the Civil Rights movement. He amply describes the nature of these conflicts and the impact they had on American society. The leading figures are brought into focus, as well as the crucial events of the periods such as the Cuban Missile Crisis. He weaves in a wide variety of cultural issues such as religion, noting how it has influenced successive administrations. He ends the period with the downfall of Nixon, who appears throughout the book from his involvement in the House anti-American investigations, to his vice-presidency under Eisenhower to his subsequent presidency. It is a well-rounded account and a wonderful addition to the Oxford History of the United States.What was most interesting to me was the powerful influence religion had on our society and the conflicts that arose during the Civil Rights movement and the Age of Aquarius. Patterson noted that Americans remained the most devoted church-goers throughout the troublesome 60's. The church became the rallying point of the Civil Rights movement, and also served as the bastion of white supremacy. Such contradictions made for volatile conflicts as each side felt it had the moral upper hand. The seemingly all-pervasive drug culture may have captured the public's imagination, but by and large America remained a nation of social conservatives.Patterson provides good overviews of the Korean and Vietnam wars, tying them into the ideology of the Cold War. He shows the seamless pattern that ran through these conflicts, as well as other conflicts in which the US found itself embroiled in during its effort to defeat communism. The costly battles left millions of Asians dead and no clear victories, tarnishing the reputation we had achieved after WWII as the champion of democracy. He illustrates how each president from Truman to Nixon tried to avoid these conflicts, but somehow could never shake the "Losing China syndrome." It is a well-documented book covering a tremendous amount of ground. Patterson steers clear of polemics, opting for a well-balanced assessment of the era. Naturally when one takes on such a broad subject, certain discrepencies do arise, but there are no glaring errors, and the book has a narrative grace that leads the reader effortlessly through the tumultuous events.

Published by Thriftbooks.com User , 22 years ago
Patterson writes about a time in American history when We as Americans hade high hopes for what this country could do. Patterson makes you believe that you were part of tha tmonent in history from his explation of the ecomic boom after the war to the kennedy assination to the fall and failure of the grend expectations set forth by the society eith Richard Nixon and the Watergate scandal

Published by Thriftbooks.com User , 22 years ago
This magnificent Oxford History of the United States volume joins earlier OUP volumes, James McPherson's "Battle Cry of Freedom" and David Kennedy's "Freedom From Fear," as exemplary history.These reflect the uncommon standard of excellence that personified their editor, C. Vann Woodward. Professor Patterson,the author of diverse, acclaimed books on this period, draws on an impressive panoply of sources from which he has crafted a judicious assessment of the period from Truman through Nixon. I find that he strikes the proper timbre in examining this critical period of great American responsibilities and major domestic and international challenges. One great strength is his sensitivity to economic and social shifts. Another strength is Patterson's keen insights into the personalities of Truman, Eisenhower, Johnson, and Carter, with Ford mentioned in passing. In 790 pages of narrative, some of my favorite examples of quirky history must be excluded. I particularly regret exclusion of the Ford-Kissinger Mayaquez fiasco, in which 41 marines lost their lives rescuing 38 "hostage"crew members who had been released before the rescue operation commenced. One problem in writing contemporary history is that new, essential source materials are continually being made available. In a subsequent edition i would hope that Professor Patterson might incorporate insights from: Fred Emery's "Watergate: The Corruption of American Politics and the Fall of Richard Nixon," together with the excellent 3-video "Watergate" shown on The Discovery Channel; John Lewis Gaddis's "We Now Know: Rethinking Cold War History;" and Jeremy Isaacs' & Taylor Downing's "Cold War: an Illustrated History, 1945-1991," which is a companion book to the superb, 24-episode CNN Cold War series.
Trustpilot
Copyright © 2022 Thriftbooks.com Terms of Use | Privacy Policy | Do Not Sell or Share My Personal Information | Accessibility Statement
ThriftBooks® and the ThriftBooks® logo are registered trademarks of Thrift Books Global, LLC