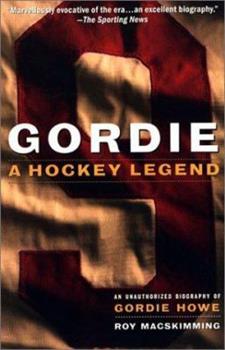 Wide appeal for hockey fans.-- PW. ...far superior to the hero-worshiping, gee-whiz, then-we-played, ghostwritten autobiographies so popular today....Howe has his darker side...also captures Howe's sense of fun and makes it clear that the man lived to play hockey....Must reading for hockey fans.-- Booklist. A very impressive book...thoughtful, well-written and marvelously evocative of the era when the NHL had only six teams and the Red Wings were...

Published by Thriftbooks.com User , 15 years ago
Gordie a Hockey Legend is book is a great book for anyone who knows about hockey and what the sport is and how it has evolved for its early stages with the popular players like Gordie Howe, He really set the bar in hockey back in his days. He held the NHL scoring title with the most goals in his career with 801 goals until "The Great One", Wayne Gretzky passed him in April of 1993.Gordie is really a Hockey legend. Gordie is really a legend. He was Known for his ability to be tough anytime during a game, and get the goals, and stand up for his team at anytime needed. This Book was really good in my view. It described his great career, and his life leading up to and being in the NHL. I would recommend this book to a lot of my friends, especially to my friends that like, and or play hockey. This book really shows the meaning for, and how hockey started to become more popular especially in the United States and in Canada. I really liked this book, and it is one of my favorites, and I would recommend it to anyone. This is truly a great book.

A Great Book on Gordie Howe!

Published by Thriftbooks.com User , 21 years ago
This book tells about Gordie Howe, one of the best hockey players ever, and his career in the NHL.In the beginning, it tells about his first couple of seasons, and then tells more about his great career and facts about him toward the end. I learned a lot about him from this book, for example, I learned that he has played for two teams, the Hartford Whalers and the Detroit Red Wings, and that he was considered one of the greatest players of his time.

An enthralling look at professional hockey's past, and stars

Published by Thriftbooks.com User , 22 years ago
As a lifetime fan of the Detroit Red Wings, I was overjoyed when I found that there is a recent biography of Howe that is much more up to date than many written in the 60's and 70's. This book gives the reader an inside look at what it was like to get into the NHL in the 50's, and what it took to stay there and become a star. Mackskimming is very candid when talking about the front office's team management "politics" The reader also gets an up-close look at other great stars of the era such as Red Kelly, Ted Linsay, Maurice "Rocket" Richard, and coach Jack Adams. A must read for any TRUE hockey fan.
Copyright © 2022 Thriftbooks.com Terms of Use | Privacy Policy | Do Not Sell My Personal Information | Accessibility Statement
ThriftBooks® and the ThriftBooks® logo are registered trademarks of Thrift Books Global, LLC