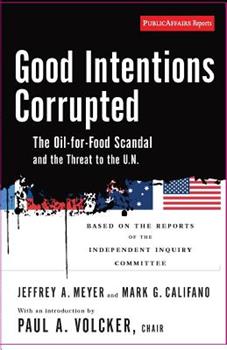 Good Intentions Corrupted: The Oil for Food Scandal and the Threat to the Un

Despite its good intentions, mismanagement and corruption plagued the UN's Oil-for-Food Program: - More than 2,200 companies paid 1.8 billion in illegal surcharges and kickbacks to the Iraqi regime - The UN Security Council stood by as the Iraqi regime outright smuggled about 8.4 billion of oil during the Program years in violation of UN sanctions - The Iraqi regime steered oil contracts for political advantage by giving rights to buy oil to dozens...

What Oil for Food Says and Does Not Say

Published by Thriftbooks.com User , 15 years ago
Good Intentions Corrupted is an excellent, very readable summary of the Volcker report (much of which I read). It documents the problems with the Oil for Food Program convincingly. It is very thorough about all of the elements of the case that were reported in the press. What it doesn't say, and this is important, that the UN Secretariat -- other than one senior official -- were culpable for the mess. The role of the governments in the Security Council in setting up the program so that it could be abused is clearly set out. For those parts that the United Nations Secretariat administered, within the limits of resources, the program did what it was supposed to. A good companion reading, which looks at Oil for Food from the inside is Hans-Cristof von Sponeck's A Different Kind of War: The UN Sanctions Regime in Iraq (New York: Berghahn, 2006). Von Sponeck, a career UN official, had the unpleasant job of delivering the food that the oil was expected to buy, and like his predecessor in the position, felt that he had to resign rather that try to work under these conditions. There are many lessons from the Volcker report. There is a need for oversight by an effective audit office, which is the "gotcha" lesson. But perhaps the key lesson is to equip the international public sector with the means to implement this kind of program, rather than leaving it to the complex political decision-making of often disinterested States.

Published by Thriftbooks.com User , 15 years ago
Until reading this book I did not realize how much I missed the forest for the trees in the official U.N. reports of the Oil-For-Food Program. The sheer volume of information in those reports makes it almost impossible to absorb the big picture. These authors, including two of the prosecutors who unearthed the scandal, have performed a commendable public sevice by making the essential facts of the Program's failings accessible, readable and understandable. The book tells a focused and compelling story of rampant malfeasance at every level of the U.N. and many of its member States. There are also many truly astonishing tales of individual corruption, supported by overwhelming evidence that is summarized clearly and concisely. It is obvious that the authors' detailed recommendations for U.N. reform should be implemented immediately. This book should be translated into 50 languages and is tailor-made for a Nova documentary. I hope it happens so this important story can be brought to as many people as possible.

Published by Thriftbooks.com User , 15 years ago
At last a clear, short, well-written and captivating account of how Saddam Hussein managed to amass billions of dollars under the table during the United Nations Oil for Food Program. Though the book is based on the dreadfully dry, multi-volume report issued by Paul Volcker's investigation, it is actually a pleasure to read. This book explains, without sensationalism or political bias, how United Nations policy, international political compromises, greedy companies, nations, and individuals helped Saddam control the sale of oil and the purchase of humanitarian supplies so that he could receive kickbacks and surcharges. The story is not just one of individual or even U.N. corruption, but the story is at core about the weak will and lack of commitment of the international community to follow through when it administers economic sanctions against rebel regimes. As we face the question of how to handle nuclear proliferation and terrorism, this is a must-read, for if we do not learn from the past we are doomed to repeat it. The book is also a fascinating account of how international cooperation and a crack team of independent investigators, funded by the United Nations, managed to expose the corruption, causing several nations to institute prosecutions and jump-start their own investigations, and forcing the United Nations itself to get serious about institutional reforms. That this international investigation could be so successful shows that international cooperation is possible, and this alone gives me hope that economic sanctions regimes can be better designed and administered in the future.
Trustpilot
Copyright © 2022 Thriftbooks.com Terms of Use | Privacy Policy | Do Not Sell or Share My Personal Information | Accessibility Statement
ThriftBooks® and the ThriftBooks® logo are registered trademarks of Thrift Books Global, LLC