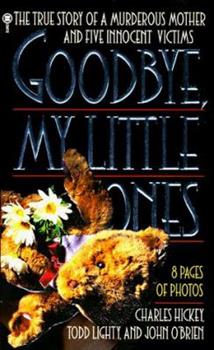 Good-Bye, My Little Ones: The True Story of a Murderous Mother and Five Innocent Victims

Published by Thriftbooks.com User , 13 years ago
this is a cutting edge look into an eerie subject: how many so-called crib deaths are really accidental? the authors do a remarkable job of descriptive writing in telling about the medical testimony and the trials themselves. still, the downside is, what does this do to a parent who has lost a child to natural causes? will this put a pall over every infant death? will this cast suspicion on every parent in these circumstances? this is equally disturbing.

Published by Thriftbooks.com User , 22 years ago
this book is full of information about Waneta Hoyt but it also is about another parent who killed his babies. Stephen Van Der Sluys also murdered his babies because they were in his way & he did not want to take care of them. Charles Hickey does know how to tell a story.

Published by Thriftbooks.com User , 23 years ago
A very well written book. This is a story that needed to be brought to book to let people take a look at what happened in the family life a Waneta Hoyt and the deaths of babies; Eric, James, Julie, Molly, and Noah. Thanks should go to William Fitzpatrick, DA and to all the investigators for bring these murders to light. Also thanks to the author and contributors. This story will make you mad for what Waneta did, sad for the innocent babies and relieved for some justice. A must read!

Published by Thriftbooks.com User , 25 years ago
*Goodbye, My Little Ones* concerns a case of serial infanticide in New York state. A prosecutor was working on a case in which a father was tried and convicted for murdering one of his three children. (He was in fact suspected of having killed all three.) An expert witness brought the prosecutor's attention to an earlier case, in the late 1960s, in which several children in another family had supposedly died of SIDS (crib death); the witness believed those were homicides also. Eventually the prosecutor reopened that case, and the mother, Waneta Hoyt, was convicted in 1995. I particularly like true crime books with a medical angle. This one includes interesting information on the history of SIDS research. Two of Hoyt's children (identified only by their initials) had been included in a major paper on SIDS in 1972, but almost from the very beginning some physicians suspected that those cases were homicides. The authors' style is a bit more reportorial and brisk than the work of some other writers in this genre; Ann Rule, for instance, takes more time to develop the atmosphere of a setting. This book moves the reader right along without, however, slighting any points of detail or character
Trustpilot
Copyright © 2022 Thriftbooks.com Terms of Use | Privacy Policy | Do Not Sell My Personal Information | Accessibility Statement
ThriftBooks® and the ThriftBooks® logo are registered trademarks of Thrift Books Global, LLC