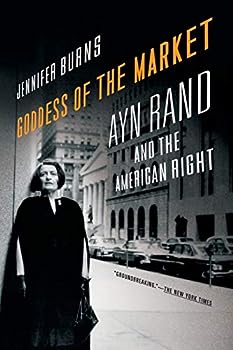 Goddess of the Market: Ayn Rand and the American Right

Worshipped by her fans, denounced by her enemies, and forever shadowed by controversy and scandal, the novelist and philosopher Ayn Rand was a powerful thinker whose views on government and markets... This description may be from another edition of this product.

A major influence in a major part of my life -- but it's good not to be an objectivist!

Published by Thriftbooks.com User , 12 years ago
I just finished reading this book; i could not put it down. however that may be because AR and Objectivism played such a big part in my life at a very important time in my life and this is the first book i have read that seems to actually be 'objective' about AR and her followers. with my then-husband, we operated and ran the los angeles chapter of NBI in the 60's. when the 'break' with the brandon's occurred, we were astonished to find that unless we 'sided' with AR, we were excommunicated (their words). we refused to side with anyone. after that we were not even allowed to subscribe to the publications of AR and her cohorts. it was truly heartbreaking; we were being asked to take sides without knowing anything about anything except that AR had denounced NB. we could not do that, and so we were kicked out of an organization that we had been steadfastly loyal to for a number of years. that is not to say that NB was such a saint either; he did his share of humiliating and abusing those who he felt were 'less' than he; even to the point of admitting to us one day that yes, he and AR did believe, as did Nietszche, that there were those who were 'more deserving' than others; more worthy of life, more elite. they believed in a hierarchy which allocated a special level of entitlement. AR and NB being a part of, if not THE, hierarchy of course. this said while sprawled on our sofa, chewing on radishes. he could be a charmer, but he could be a SOB just as easily. by then, i was heading out the door and out of the realm of objectivism. i learned a lot from both AR and NB (i truly liked barbara and found her to be a classy, warm woman who did not need to intimidate and humiliate others in order to feel good about herself). they were my education and taught me how to think --- for myself. i had to pull away from them because they were poison to a young person trying to find her way in the world. i felt that my very soul was in danger of being completely sabotaged. it was their way or 'the highway' --- meaning: you were irrational, unethical, immoral --- not worthy of existing. on the other hand, they also gave me the greatest tools in the world --- how to think about thinking. how to approach ideas in a rational manner. and how to NOT let myself ever, ever, ever again be dragged into a cult such as objectivism had become. AR was a brilliant, angry, disturbed, troubled woman. i loved her and loathed her. most especially, i loathed 'the movement' and all that it represented. a great example: one time i had worked for NB doing secretarial services for him (after the break) in l.a. i had typed up a letter he dictated, signed the letter (he was out of town) and mailed it. he came to our house the following saturday morning when my husband and i were having breakfast and still in our robes. he sat down, had coffee and then expressed his extreme displeasure with me. "You used an exclamation point in the letter!" he practicall

Published by Thriftbooks.com User , 12 years ago
There are some excellent reviews on this book that have already said what I thought about saying. See in particular the one by Mataconis. I would only add a more personal note that. Like many people, I read Ayn Rand's work as a late teenager and was enthralled by it. When you know virtually nothing about the world, someone like Ayn Rand, who had an opinion about virtually everything and didn't hide it, can be quite impressive. She attempted to build an all-encompassing philosophy that would provide people with a consistent, rational framework on which to structure their lives and thoughts around. I have since moved away from her philosophy but retain an interest in her and the effect she has on people, both positive and negative. Neither side seems to put much stock in the other; those who love her dismiss any criticisms, however slight, as those of second-handers, while those who revile her don't see any redeeming qualities in her. I fall outside of this range entirely, and so Burns' biography was welcome. She seems to be impartial in her biography and doesn't let on as to her own position with respect to her subject. It's a tribute to her even-handed treatment of Rand that she held my interest in Rand, even though I no longer feel much of a connection to her philosophy. I recommend this book to anyone interested in a fair-minded treatment of Rand, which is still a rare thing these days.

The Fountainhead Of The Modern Libertarian Movement

Published by Thriftbooks.com User , 12 years ago
There are few figures in the American libertarian movement that gave rise to as much controversy or passion as Ayn Rand. Love her or hate her, it's hard to find a libertarian who doesn't have an opinion about the author of The Fountainhead and Atlas Shrugged. For many of us, she was the one who lit the spark that sent us down the road toward becoming a libertarian. Even after her death, some still consider themselves hard-core Objectivists in the model of those who gravitated around the Nathanial Branden Institute in the 1960s. For most libertarians, though, while Rand is arguably the most influential moral philosopher, she is also someone who's flaws, both personal and philosophical have been acknowledged, debated, and argued about for decades. There's always been a missing piece of the puzzle, though, and that was that nobody had really undertaken a full-scale intellectual biography of someone who, even today, can sell 200,000 copies a year of her 1,000+ page magnum opus. There were personal biographies by Barbara Branden and Nathaniel Branden, but those both seemed to concentrate on the more lurid details of Rand's personal life and the circumstances behind the 1968 Objectivist Purge. The heirs of Rand's estate, meanwhile, have guarded her papers closely in an obvious effort to protect her legacy and reputation. Someone wanting to learn more about Rand's life, the development of her ideas, and her impact on American politics, had almost nowhere to go that wasn't totally biased in one direction or the other. That's why Jennifer Burns' Goddess of the Market: Ayn Rand and the American Right is so welcome. Instead of dwelling on the lurid aspects of Rand's affair with Nathaniel Branden, and without taking sides regarding the many controversies that followed Rand in years after Atlas Shrugged was published, Burns provides a thorough, well-written and well-researched survey of how Ayn Rand went from Alisa Rosenbaum of St. Petersburg, Russia, born just as Czarist Russia was beginning it's decent into chaos, to Ayn Rand, the woman about whom more than one person has said "she changed my life." For people versed in the history of libertarian ideas, the most interest parts of the book will probably be Burns's documentation of Rand's interaction with the heavyweights of both the Pre World War II Right and the conservative/libertarian movement that began to take shape after the war ended. She corresponded with Albert Jay Nock and H.L. Mencken and, most interestingly, developed a very close personal and intellectual relationship with Isabel Patterson, best known as the author of The God of the Machine. For years, especially during the time that Rand was writing The Fountainhead, Rand and Paterson exchanged ideas and debated philosophy, and it's clear that they both contributed to the others ideas. The Rand-Paterson relationship, though, also foreshadowed something that would happen all too frequently later in Rand's career, the purge. Paterson was amo

Sets a New Standard for Books on Rand

Published by Thriftbooks.com User , 12 years ago
For the first time, a book on Ayn Rand has been published which does not come from the Objectivist inner circle; which is of general interest; and which is written by an impartial scholar. The book marshalls a remarkable amount of information: Professor Burns has consulted 18 collections at 10 archives - and was given access to the Ayn Rand Archives themselves. She has read, audited, or conducted 89 interviews. She also cites more than 200 books in her bibliography, and there are 48 pages of footnotes for those who want to know the exact sources for her information. The book examines Ayn Rand's work and ideas closely; but it also traces its many connections with and influences upon America's political and cultural right wing. If scholars who come after her wish to be taken seriously, they will really have to do their homework - as she has. Burns is a historian, not a philosopher - and she approaches Rand from a historian's viewpoint. As a historian, she shows the influence that Rand's ideas have had on the right wing of American politics; but - also as a historian - she shows how Rand's personality and character affected the way that message was received. If you disregard either the person or the ideas, you're not writing good history. Burns gives full attention to both aspects of her subject in this book. Still more importantly, what this book gives back to Ayn Rand is context. Many Objectivists have withdrawn into a self-referential, self-ghettoizing circle where every word of Ayn Rand is viewed as inerrant and one takes note of cultural or intellectual trends in the wider world only in order to express one's contempt for it all. Many people attribute the same sort of intellectual solipsism to Rand - and during the last ten years of her life, this may not have that far from the truth. But in the period up to 1970, Burns does an excellent job of documenting Rand's connections with many, many people on America's intellectual and political right wing. The connections weren't always friendly; but they were there. At the end of this book, a reader will understand how Ayn Rand fits into the story of America's culture and politics between 1930 and the present - and will understand this far better than he or she did at the book's beginning. It's an impressive achievement. No review of this book, however, would be complete without commenting on Burns's "Note on Sources". This is the part of any book that many readers don't bother with. That would be a real mistake this time. For Burns makes it clear in her Note that the majority of the books published posthumously under Ayn Rand's name have been edited - changed, smoothed over and sanitized - without any indication within the texts themselves that such changes have happened. The "Journals of Ayn Rand" comes in for especially heavy criticism. Chris Sciabarra raised concerns ten years ago about possible tampering with the texts of Ayn Rand's journals. He has been proven right, an
Trustpilot
Copyright © 2022 Thriftbooks.com Terms of Use | Privacy Policy | Do Not Sell or Share My Personal Information | Accessibility Statement
ThriftBooks® and the ThriftBooks® logo are registered trademarks of Thrift Books Global, LLC