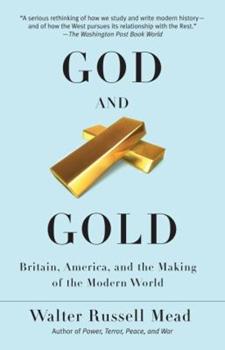 God and Gold: Britain, America, and the Making of the Modern World

A stunningly insightful account of the global political and economic system, sustained first by Britain and now by America, that has created the modern world. The key to the two countries' predominance, Mead argues, lies in the individualistic ideology inherent in the Anglo-American religion. Over the years Britain and America's liberal democratic system has been repeatedly challeged--by Catholic Spain and Louis XIV, the Nazis, communists, and Al...

Why Doesn't The World Understand Us?

Published by Thriftbooks.com User , 14 years ago
[Note; this Review appeared on the Claremont Institute website, on July 17, 2008] In his new book, God and Gold, foreign affairs expert Walter Russell Mead argues that modern world history can be understood as the global application of a system of economics, religion, and culture developed and directed by the English-speaking peoples. From the time of Oliver Cromwell to the present, the British and the Americans, either individually or together, have won every major war, and have established a commercial and military dominance that remains the foundation of the modern world. "It is perhaps bad manners to say so," Mead acknowledges, "but that does not make it less true." Mead addresses six questions which he believes can help us better understand and handle the problems and dangers that confront America today: (1) What exactly is the agenda of the Anglo-Americans? (2) Why have they been so consistently successful in their military and economic conflicts with other nations? (3) How did they manage to build a global order? (4) Why have they so frequently believed that their successes were about to give rise to a world of peace and prosperity? (5) Why have they been wrong every single time? (6) What is the meaning, significance, and future, of Anglo-American power? As Mead confronts these questions, we find that the strengths of his book include his authoritative mastery of historical, political, and economic facts, which he uses liberally to support his argument, and his ability to weave together cultural, religious, economic, and political strands of history into a fascinating, coherent synthesis. Its weaknesses include a sometimes overbearing repetitiveness of key points and a rather unsatisfying response to the major contemporary criticisms of Anglo-American culture in the end. Nonetheless, the book is a very worthwhile read, both for its historical sweep and--most importantly--for Mead's lucid and useful suggestions regarding the future of American foreign policy. * * * The agenda itself is straightforward. There has long been an unwritten Anglo-American strategy for economic and military dominance. The aim has been to create a world-wide system of trade, investment, and military might, based on sea power. This maritime order meets Anglo-American economic and security needs. But why has it been so successful? The British have typically had a smaller population and fewer resources than their continental enemies. Historically, however, they employed a unique approach to world politics that consistently led to greater success in world affairs than their rivals. Their basic formula combined an open society with world trade and world power. First of all, success required a new kind of society, a free and open society, where growth, change, and endless innovation would be encouraged--i.e., a capitalist society. Like Max Weber, Mead believes that the reasons behind the success of capitalism in England can be found in religion. Catholicism

Quite simply a very good book!

Published by Thriftbooks.com User , 15 years ago
This book is very readable. A big blend of history, philosophy, politics, and religion. The metaphors used give the book a light hearted feel (such as the Walrus and the Carpenter, Alice in wonderland etc) but emphasize rather then detract from the main points. At times the book is a little too 'American' in the sense that British achievements and British history (which is far older than US history)are referred to as 'Anglo-American' as opposed to just 'British'. On the other hand, any US achievements are referred to as simply 'American'. In the preface of the British edition, the author acknowledges that there are a few points which Brits may find a little contentious but hopes no offense is caused. This aside, the book is a joy to read and provides a very interesting perspective of Anglo-American history and the current Anglo-American alliance.

Far More Than Meets The Eye

Published by Thriftbooks.com User , 15 years ago
On first glance God and Gold might seem to be a typical triumphalist school of history production about the glorious rise of the Anglo-Americans and their victories over lesser peoples. However, the reader who takes a second look will recognize that Walter Russell Mead has created a wide-ranging and fascinating examination of world history over the last three hundred years or so that, while it does praise the strengths of the Anglophones or Wasps, is not blind to their short comings or to the achievements of other peoples. I found this book fascinating on many levels. Its a superb work of history, making deft comparisons and drawing excellent and elaborate parallels. The analogies are clear and highly illuminating. Mead is thought provoking and astute in his assessments. I appreciated the attention paid to the role played by organized religions and the reassessment and validation of earlier historians' theses on Protestantism and Christianity. Most of all, I enjoyed the many literary references and analogies, particularly the Carrollian theme of the Walrus and the Carpenter that runs through the book. Mead can be harsh in his criticisms, particularly of the foolish vainglory of the Bush Administration over the last few years, but overall the book is hopeful and optimistic in its assessment of the past and predictions for the future.

Published by Thriftbooks.com User , 15 years ago
Mead is a master of making complex history of American thought accessible and lively. God & Gold is a fearless account that dares to examine how the English-speaking powers created the institutions we hold most dear--and how they have fought to defend them. It isn't politically correct; but it's brilliant. Mead's work is formidable, and has academic rigor; but this isn't some dense intellectual history. It is an accessible read, and one that makes the reader much, much smarter.

Published by Thriftbooks.com User , 15 years ago
There are few works and fewer scholars who can skillfully bridge and interweave topics like history, economics, and foreign relations without any one of the three areas suffering. Mead is just such an author and this is just such a book. Even more than his previous works, in this volume Mead manages to make linkages between these topics to present a remarkably fun, remarkably cohesive account of how Britain and later the United States, came to be the world's superpowers. Beyond being a simply stellar set of ideas, it is simply one of the best written books of the year. It was the first time in a long time where I found myself simply unable to put a history book down until I finished it.
Trustpilot
Copyright © 2022 Thriftbooks.com Terms of Use | Privacy Policy | Do Not Sell My Personal Information | Cookie Preferences | Accessibility Statement
ThriftBooks® and the ThriftBooks® logo are registered trademarks of Thrift Books Global, LLC