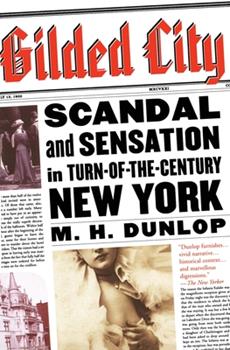 The dark side of the Gilded Age is revealed in this vivid new view of turn-of-the-century New York. Scholar of American culture M. H. Dunlop penetrates the psyche of New York City in the pivotal years made famous by Edith Wharton, the Vanderbilts, and the Rockefellers, unveiling an age that was not genteel and proper but dangerous and predatory. Drawing on rare primary sources, Dunlop showcases the sensational and surreal events of the times -- from...

A Study that Needed a Little More Study

Published by Thriftbooks.com User , 18 years ago
When I picked up this book, I expected it to be a chronicle of the decadence and debauchery of turn-of-the-century New York ('Scandal and Sensation' are in the subtitle, after all). As I read along, it became clear that the author had a specific thesis in mind, and that the book was more a study of class/sexual/social relations during this economically volatile era than a scandal sheet. Fine. But as a study, I found the evidence to be slim. What she presents as support for her theory (newspaper accounts) is questionable. Imagine future generations trying to figure us out based on what the New York Post says! Still... Looking at it as a compiliation of social atrocities committed by the affluent in the face of the poor, it's pretty outrageous. I enjoyed the dozens upon dozens of anecdotes, and Dunlop's style is very engaging. Even the footnotes were enjoyable! While I wasn't satisfied with her attempt to neatly tie together all the chapters at the end of the book, I was satisified that I had gotten a better understanding of a decadent, turbulent, and fascinating society.

A new and improved 19th century!

Published by Thriftbooks.com User , 20 years ago
Finally, finally. A book about the 1890s that doesn't drag out the same old "Gilded Age" cliches, like Stanford White and the bland fantasy in Edith Wharton's novels. This book deals with the real thing, i.e. the raw, indulgent and competitive consumption of goods by the very rich. This book won't appeal to readers who want the nineteenth century to be about middle class propriety. But it will appeal to readers who prize its original material and the way it retells the story of the period. Terrific. I will never look at a painting of a peasant girl, or a red velvet sofa, in the same way!

Eat the Rich (of Turn of the Century New York)

Published by Thriftbooks.com User , 21 years ago
M. H. Dunlop's Gilded City began slowly for me as I got used to her style but then nothing could stop me. This book is full of salacious gossip and horrifying scandal. The behavior of the rich would be laughable if it was not at the expense of the poor. If Ms. Dunlop does not exactly take a position, she does create one by her selection of material. She truly makes the disparity between rich and poor come alive in a way that is shocking and true. The sources are limited to newspaper accounts and this is not a truly historical survey of the decade but it does achieve what it sets out to do. It creates for the reader a glimpse of the social world at this time as seen by the readers of the newspaper and the members of society trying to get in the newspapers. A fun, frightening read.

Published by Thriftbooks.com User , 21 years ago
The author does an engaging job of letting the facts shine through in Gilded. In lively and unpretentious prose, she presents outrageous behavior with deliciously wry understatement. I hope other academics take note. I've read several popular histories recently that featured great material dulled down by excrutiating "academese" and intrusive commentary. (They seem to be close-captioning their work for the insight-impaired.) Dunlop lets her cleverness come through in her selection of characters and scandals that represent a time gone by -- yet seem all too familiar.

Published by Thriftbooks.com User , 21 years ago
Dunlop is a great storyteller and a shrewd critic of culture. The material in Gilded City, excavated for the first time in a century, entirely changes our view of the "genteel" 1890s in New York. I especially cherished the chapter on Tip the elephant, and also the story of the man who, though broke, purchased one ton of pie for an imaginary army.
Trustpilot
Copyright © 2022 Thriftbooks.com Terms of Use | Privacy Policy | Do Not Sell or Share My Personal Information | Accessibility Statement
ThriftBooks® and the ThriftBooks® logo are registered trademarks of Thrift Books Global, LLC