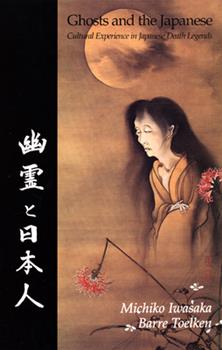 Ghosts and the Japanese: Cultural Experience in Japanese Death Legends

by Barre Toelken and Michiko Iwasaka

The Japanese have ambivalent attitudes toward death, deeply rooted in pre-Buddhist traditions. In this scholarly but accessible work, authors Iwasaka and Toelken show that everyday beliefs and customs--particularly death traditions--offer special insight into the living culture of Japan.

Published by Thriftbooks.com User , 12 years ago
Loved this book, gives you an inside look at Japanese culture and how they deal with death.

Excellent, One of the Best

Published by Thriftbooks.com User , 13 years ago
This book is a great resource. Individuals familiar with the Japanese culture will find this book insightful and enjoyable. If someone is unfamiliar with Japanese culture and looking for a great start this book is highly recommended. In the text cultural phenomena that occurs everyday is related to death customs. The illustrations and their origin are an added bonus.

A sociological study of Japanese ghosts and modern society

Published by Thriftbooks.com User , 17 years ago
"Ghosts snd the Japanese: Cultural Experience in Japanese Death Legends" is a scholarly text that seeks to do more than catalog a few fine Japanese ghost legends, but also to undertake a serious study of those legends in the context of Japanese culture. The book basically consits of three articles. "An Introduction to the Left Stairway" examines folk-lore studies as a general concept, introducing several views on the subject and winds up being the kind of introductory summary one might recieve on any general "Intro to Folk-lore studies" course. "Death Customs in Contemporary Japan" takes a look at funerary rites and customs as practiced in Japan today, and the obligations of the living to the dead. "Japanese Death Legends and Vernacular Culture" is the meat of the book, catagorizing several Japanese ghost legends into five areas; "Mother and Child," "Revenge and Anger" "Omens," "Ghosts at Sea" and "Passions." Each ghost story is very briefly sumarized, usually in no more than one or two paragraphs, so one can get the idea why it was placed in that particular catagory. The failing of the book lies in its briefness. It is a very small text, being only 124 pages in length, and almost every concept is summarized and skimmed over as briefly as the stories themselves. The fundamental concept of the book, that ghost legends such as these remain a necessary aspect of modern culture, is an interesting concept but is poorly established. While there is mention of various Japanese texts that examine these legends from a Japanese perspective, there is little summation or translation so the ideas presented, and usually not more than an author's name and a title are given. The book shows some contempt for Joseph Campbell's theories on Japanese culture, but does not go inot a serious debate against his ideas, more of a general dismissal. Even in the face of these failings on a whole, "Ghosts and the Japanese" is a good book, rich with unique ghost stories as well as wonderful reproductions of the Zenshoan Temple's massive collection of ghost portraits. For these ghost portraits alone I think the book is worth the price. There are few English language books on this subject and this one provides some insight, ideas and a launching-off point for individual discovery.

Published by Thriftbooks.com User , 21 years ago
There are obviously far better books on the subject available in Japanese, but this is the best English-language text I've ever found on the subject of Japanese ghosts. However, readers should be forewarned that the first half of the book reads like an "Introduction". Lay readers who are just looking for stories and aren't interested in the authors' theories and sociological opinions would be better off to start reading from page 43 (or even page 60 for some readers). In fact, I'd go so far as to recommend that most readers start at page 43 (or 60) and read the earlier parts of the book later.

Published by Thriftbooks.com User , 23 years ago
Not only is this a very readable text, but the hauntingly beautiful illustrations pulled from a variety of sources add a very special touch. One learns so much of Japanese culture in reading this work.
Trustpilot
Copyright © 2022 Thriftbooks.com Terms of Use | Privacy Policy | Do Not Sell My Personal Information | Accessibility Statement
ThriftBooks® and the ThriftBooks® logo are registered trademarks of Thrift Books Global, LLC