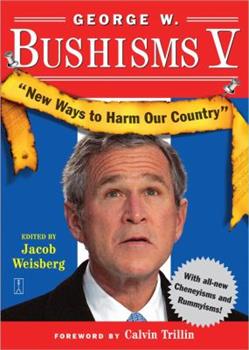 "I can only speak to myself." True -- and yet we must listen. Sometimes his accidental wit speaks louder than any prepared statement. "Our enemies are innovative and resourceful, and so are we. They never stop thinking about new ways to harm our country and our people, and neither do we." "I always jest to people, the Oval Office is the kind of place where people stand outside, they're getting ready to come in and tell me what for, and they walk in...

Published by Thriftbooks.com User , 14 years ago
A really good read. How anyone even cast a single vote for this idiot is beyond my imagination....and I am a 5th generation Republican....To read the various blunders and errors Bush makes with our every day language is a joke. We are the laughing stock of the world--and our childrens children will be paying for his mistakes. W. B. Goetz Lemoyne, Pa.

New Ways to Harm Our Country - And Then Some

Published by Thriftbooks.com User , 16 years ago
Bushisms V continues the tradition of highlighting W's amusingly disturbing utterances - his `accidental wit and humor' - that have been carried over into his second term. To some degree, Jacob Weisberg has been literally forced to adapt along with W's sudden shift towards actually speaking English during mid 2004. Still, W never fails to provide us with statements that, while perhaps structured and grammatically correct, nevertheless range from humorous to horrifying and with a little of both in between. Take, for example, his statement that: `Too many OB/GYNs aren't able to practice their love with women all across the country.' Over a year later and I still break out with laughter over this priceless gem. That's the beauty behind this and many more remarks included in the latest edition. Even if you've heard them live or regurgitated by stand-up comedians, they still have the power to make you laugh or at least want to, depending on your end of the political spectrum. Although a few remarks from Cheney and Rumsfeld are also included, you probably didn't need me to inform you that they have far less comedic value. Cheney is by far the most disturbing and his unsettling statements appear to be strictly for character development. The result is dark and devoid of humor, shifting the mood to near downright depressive and the only reason I won't award 5 stars (I'm in this for the laughs). However, Rumsfeld does offer a glimpse of hope: `Reports that say that something hasn't happened are always interesting to me, because as we know, there are known knowns; there are things we know we know. We also know there are known unknowns; that is to say we know there are some things we do not know. But there are also unknown unknowns - the ones we don't know we don't know.' It's no wonder he won the "Foot in Mouth" award handed out by The British Plain English Campaign for his legendary nonsensical remark.
Copyright © 2020 Thriftbooks.com Terms of Use | Privacy Policy | Do Not Sell My Personal Information | Accessibility Statement
ThriftBooks® and the ThriftBooks® logo are registered trademarks of Thrift Books Global, LLC