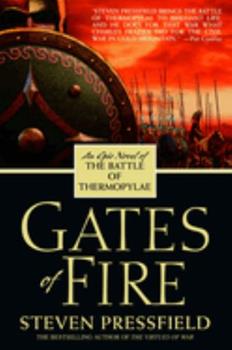 Gates of Fire: An Epic Novel of the Battle of Thermopylae

NATIONAL BESTSELLER - "An incredibly gripping, moving, and literate work of art, rarely does an author manage to re-create a moment in history with such mastery, authority, and psychological insight."--Nelson DeMille At Thermopylae, a rocky mountain pass in northern Greece, the feared and admired Spartan soldiers stood three hundred strong. Theirs was a suicide mission, to hold the pass against the invading millions of the mighty Persian army. Day...

Published by Musha Shugyo , 6 months ago
I don't know very many books that can elicit a strong emotional response the way that this book does. The person who recommended this book to me considers it to be possibly the best book he's ever read. Amazingly, the book has lived up to very high expectations. I've experienced it often times with movies and many more times with music, but I can't ever recall being emotionally stirred by reading a book. I've read quite a few books that I will call inspiring and many more I will call insightful, but this has been a different type of reading experience. As a person more inclined toward non-fiction (history, biography, instructional), this historical novel has been an emotionally enriching experience. Perhaps, (ironically) it is because this book about the Spartan 300 actually puts us more in touch with our humanness. This book may not be for everyone, but I highly recommend it.

Published by Where is book Gstes of Fire , 1 year ago
I didn't get book Gates of Fire did get one book us hidtory

Published by Thriftbooks.com User , 14 years ago
Everybody dies. So did these 300 Greeks. But the world will never forget their choice of death. It is incorrect that the battle at Thermopylae changed the course of history. That was the battle at Marathon, some years before, when the Greek cities were unprepared and only the city of Athens was able to scrape a small army of conscripts which, brilliantly generaled by Miltiadis, defeated the first Persian campaign and, thus, averted the infusion of Asia into Europe. Thermopylae was mostly a moral victory. In every sense - as well in the sense that it demoralized the Persian troops. At the same time, it bought the rest of the Greeks the time needed to organize their naval forces at Salamis, where they crushed the great Persian forces only weeks later. Pressfield does a fair job in making his readers get a taste of the Spartan way of life. The loyalty to the city-state; the devotion to the ideals of freedom; and the personal sacrifices offered to safeguard it. Those who would try to extract modern lessons from this historic sacrifice against the Persians should probably keep in mind that other aspects of the Spartan society have been left untold: the oppression of the older tribes - hence the need for a militaristic elite; the dissolution of democracy in any city-state conquered and the establishment of a Spartan-controlled oligarchy; the skewed morality that allowed theft and cheating as long as the final goal was achieved - and the perpetrator never got caught. Then again, maybe modern lessons can be extracted after all... Not to be taken as a history lesson - yet, could be a great excuse to get interested in the period that shaped the western civilization. HIGHLY RECOMMENDED!

Published by Thriftbooks.com User , 15 years ago
This is quite possibly the most incredible book that i've ever read. On an epic scale, the true story told through a fictional character's eyes is spellbinding and gritty. The reality of it is difficult to grasp, but Pressfield's vivid description and brilliant conveyance of emotion is captured in each line and will keep you enthralled until the end. The beginning is a bit slow, but the rest more than makes up for it. Once you get over all the Greek names and city names that are presented in the opening set-up, the story climbs until reaching the pinnacle of which you won't be disappointed. I absolutely recommend this book to anyone and everyone that enjoys history, has been in the military, or just likes to read, it really is that good.

epic and moving even for the modern hoplite.

Published by Thriftbooks.com User , 22 years ago
With a wealth of experience as a former special forces soldier and then a housing cop I found the telling of this soldier's tale outstanding. About a dozen of us actually own our own Hoplite panoply. We drill and spend our weekends as the ancient hoplites did. Every ounce of this novel rings true to what it's like to live and wage war in this gear. Spartan training had to be that rigorous to endure wearing 70 pounds of bronze for even a day. The small foibles of this novel are easy to ignore as the content of it is so engaging. Making as heroic a stand as the three hundred did at Thermopylae is not unknown to mankind in war. But let us not forget, this battle was the first of this kind. There are many dozens of particularly moving parts in this book that will remain with you in their imagery long after you have finished it. This battle has for 2500 years begged a good retelling, and it has found it's voice in "gates of fire". Today the pass doesn't resemble at all the pass in 480BC. It is however easy to imagine looking out across the plain and the stones there, smelling the sulphur springs the pass as it once was. Reading this book spares you the trip, as it comes to life in this novel. If they ever make this into a film, which would be a great injustice if they don't, we would lend our hoplons to the front ranks of this battle just to live it as it was. In reading this novel it would appear Mr. Pressfield seems to have spent as many weekends in my Hoplite armor as I have. He captured the Spartan culture nearly perfectly, for it was the women who would address their husbands and sons when they said "come back with your shield, or on it".

Impressions of Gates of Fire

Published by Thriftbooks.com User , 22 years ago
I loved this book! Five Stars means a thought provoking and powerful reading experience. Gates of Fire is a wonderful story, vividly told and built on "page-turner" techniques as effective as any I've ever met. These warriors, women, mentors, kings, and children evoke love, fear, and honor from the very first paragraph. The jacket blurbs say "epic," and here "epic" doesn't just mean "long and involved." This historical novel is so true to its times that Homer's blend of perspective and immediacy, Herotodus' human interest and recognition of irony, the power of the gods and of fate are recognizable as you read--as well as a touch of dialogue that is about to become Platonic. By the time the first epic simile appeared in a battle narrative, Pressfield's world and the warrior society and life he had animated stood so solidly behind it that it was as powerfully moving, at least for this reader, as those of the Iliad.Also moving were the respect and richness with which this Greek world was imagined. The result is a historical novel whose life invades the present. "What is the opposite of fear? How do I live? What is worth dying for?" As a reader you do march out with the army. You find yourself on a battlefield, not in a table-of-contents from a history book. I recommend this book without reserve to anyone interested in Greek civilization, army life, military history, a meditation on life and time and sacrifice, or simply a good novel. Many thanks to Mr. Pressfield.

One of the great war novels.

Published by Thriftbooks.com User , 23 years ago
This book held me from the first page. It fits easily with the great war novels like Shaara's "The Killer Angels", Jones' "The Thin Red Line", and Webb's "Fields of Fire". Pressfield has given us a look into the culture and philosophy of Sparta that has been lacking from any popular accounts of the period. His investigation into the bonds formed among combat soldiers should be read by the MBA's who run our country's defense, from political generals/admirals to the inexperienced bureaucrats and politicians of Clinton's "Free Willie" Defense Department. That said, even those of us shaken by "Saving Private Ryan" understand that the hell of a modern battlefield differs greatly from the hell of the up-close-and-personal, hand-to-hand, sword to shield, nightmare of heavily armored infantry battles in the ancient world.One of the scenes in this book that most stays with me is that of the Spartans Dienekes, Polynikes, Olympieus, and Aristodemos, sent as emissaries to the island of Rhodes to try to rally support for the Greeks. While there, they meet with Egyptian marines (subjects of Persia) and the usual amount of verbal jousting takes place between these men who will soon be fighting each other in Greece. An Egyptian marine teases the Spartans about their short swords, refusing to believe that they are the weapons actually carried into battle. How could such diminutive apple-corers possibly work harm to an enemy? the Egyptian officer wonders aloud.""The trick is"--Dienekes demonstrated, pressing himself chest-to-chest to the Egyptian Tommie--"to get nice and cozy.""And the Spartans do exactly that at Thermopylae.I can never remember the person who said that "a rational army would run away." but this novel offers an explanation for the men who walk into the maelstrom to certain death, why they do it and for whom. With generals like Leonidas, leading from the front of the phalanx, not from a throne well behind the combat, free men excel in giving their all for their freedom, their families and (can one say it these days?) their god(s).Get this book as quickly as you can and read it--slowly.
Trustpilot
Copyright © 2022 Thriftbooks.com Terms of Use | Privacy Policy | Do Not Sell My Personal Information | Accessibility Statement
ThriftBooks® and the ThriftBooks® logo are registered trademarks of Thrift Books Global, LLC