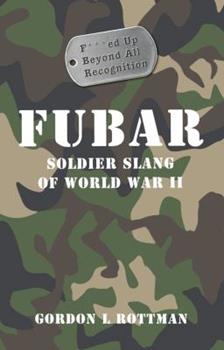 The soldier slang of World War II was as colourful as it was evocative. It could be insulting, pessimistic, witty, and even defeatist. From 'spam bashers' to 'passion wagons' and 'roof pigs' to 'Hell's Ladies, ' the World War II fighting man was never short of words to describe the people and events in his life. F***ed Up Beyond All Recognition takes a frank look at the British, Commonwealth, American, German, Japanese and Russian slang used by the...

Loaded with phrases and insights.

Published by Thriftbooks.com User , 14 years ago
Now I've seen military slang dictionaries before, but this one is different in several ways. It covers World War II army and marine slang, not just of the United States, but the British Commonwealth with a heavy dose of often humorous or rather cheeky Australian slang, and, something seldom attempted, Landserspeak, the slang of the German soldier. As a bonus there is something else one seldom sees, Japanese and Russian soldier's slang. There is something else about this book though. It does not just give a cut and dried definition of the word, but often its origins, the nuances of its meaning, and examples of its use if it's not apparent. This work provides a window into the mind of the World War II soldier. One sees a commonality among them regardless of the uniform they wore and the ideology they fought for. There is a certain dark humor in the face of adversity that helped carry them through their trails. One can see the cynicism dripped off their words. Regardless of the army, they all had slang words to describe the food they ate, abbreviated terms or nicknames for their weapons and equipment, often unflattering terms for their leaders, rather cavalier words with a double meaning in regards to the opposite sex and its pursuit, items of uniform, the holes and other places they called home, the regard they had for rear service troops, and the trails of their daily lives. Just flipping through the pages and reading entries at random are a joy in and of itself.

I really enjoyed this book

Published by Thriftbooks.com User , 14 years ago
My grandfather served in WorldWar II, but he would never talk about it. After seeing this book in an advertisement, I decided to pick it up because I've always been curious about what it was like to be in that terrible war. I really liked reading through FUBAR because it gave me a quick snapshot into what my grandfather and so many other went through.

A great way to get into the minds of WWII Soldiers

Published by Thriftbooks.com User , 14 years ago
A war like the Second World War is a kind of pressure cooker for language. Words like FUBAR and SNAFU spring out of the terrible circumstances that soldiers in battle find themselves. This is probably the most poingant dictionary you'll ever read. If you watched Ken Burns' The War, then you must read this book.
Copyright © 2020 Thriftbooks.com Terms of Use | Privacy Policy | Do Not Sell My Personal Information | Accessibility Statement
ThriftBooks® and the ThriftBooks® logo are registered trademarks of Thrift Books Global, LLC