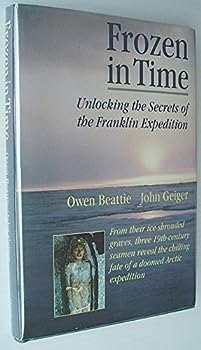 Frozen in Time Unlocking the Secrets of the Franklin Expedition

by Owen Beattie and John Geiger

Frozen in Time tells the dramatic story of how Sir John Franklin's elite naval forces came within sight of the Northwest Passage, only to succumb to unimaginable horrors. A gripping tale of... This description may be from another edition of this product.

Published by Thriftbooks.com User , 17 years ago
Having had the luxury of actually communicating with Dr. Beattie and his team of their work, I can attest that they carried out their project professionally and with dignity. This is in contrast to many who tried or will try to answer the fate of the 129 (this field of research is ripe with many egos fighting for turf over which theory of their demise is correct, and the "glory" of finding that "holy grail" -- either Franklin's grave or his log books). Dr. Beattie and team approached this project with a quest to forensically answer what may have killed everyone on the basis of toxic levels of lead found in disarticulated remains on King William Island (Kekertak) in a previous 1981 excavation. At the time they had a theory but needed to prove if the KWI specimens were indeed true or a fluke. Having gotten permission from the Canadian government to exhume the bodies (and after taking considerable time to try to locate relatives to gain permission to exhume the only properly interred remains on Beechey Island -- although not mentioned in the book, John Shaw Torrington appears to be last descendent of his line, having no siblings [his mom died in childbirth]), they proceeded to exhume Torrington and partially Hartnell in 1984. In 1986, with a larger and more technical team of experts, they conducted an even more thorough exhumation (showned very well on Nova's "Buried in Ice" documentary) of Hartnell and Braine. This book offers a brief history of the 1845-48 Sir John Franklin Northwest Passage Expedition, and goes on to detail the 1981 excavations on King William Island, the 1984 and 1986 Beechey Island exhumations, then concludes with the lab results (further proving that the lead exposure was indeed from the cans, not just the environment). The big mystery still about that finding is if indeed everyone had such high lead levels, or only the sick (who more than likely were fed "better" tinned provisions) were so grossly affected. Strongly recommend readers in getting this book and deduct the evidence themselves (this book does read like a True Crime novel), then to make up your own mind if the medical evidence is enough to answer the fate of the 129. For who knows, someone out there [you] may indeed have an answer that eluded many for almost 200 years. [A special thank you to Dr. Beattie, Dr. Amy, Brian Spencerley, and Joelee Nunqag for your communications, insights and materials to flesh out your work. BTW, another photocopy observation -- Recheck Braine's plaque and what I mentioned in a 1993 letter, with the recent copper finding off of KWI. Very much related. :x ]

"They could not have foretold such an odyssey"

Published by Thriftbooks.com User , 17 years ago
The first time I heard about the Franklin expedition on Dr. Bob Brier's television documentary on mummies, I knew I had to learn more. Of course, the main cause of my fascination was the perfectly preserved bodies of the three sailors buried in 1846 on Beechy Island in the Canadian Arctic. The expedition set off in 1845 thoroughly equipped to find the elusive Northwest Passage. None of the 129 crewmen as well as Captain John Franklin survived. Years later expeditions were sent out to find out what happened to Franklin and his men. One search team in the 1850s led by M`Clintock, who was funded by Franklin's widow, discovered the only written record of the Franklin Expedition which gave a clue as to their progress and fate and a small boat with an odd array of articles and skeletons on King William Island. Headstones of three crewmen who died early in the expedition were also found on Beechy Island. The only conclusion that was made was that the men died of scurvy and starvation. In 1981, a team led by physical anthropologist Owen Beattie continued the investigation into the lost Franklin Expedition. The reason this event was such a famous mystery was because Franklin's crew was so well prepared. Their two ships (HMS Terror and the HMS Erebus) were lavishly outfitted with survival equipment and supplies. Among their stock was a huge supply of canned foods (canning of foods being a recent practice at the time). Franklin once bragged that his provisions could stretch for 7 years (p. 18). In fact, empty tins littered the areas Franklin's crew camped. These artifacts proved clues to Beattie as to the fate of the Franklin expedition. Tests done on the lead level in bones found near Booth Point gave evidence that Franklin's men were poisoning themselves, weakening their bodies physically and impairing their decision-making. Beattie's team would exhume the bodies of the early Franklin deaths on Beechy Island to support this theory. In addition to the exhumation and autopsies of the perfectly preserved bodies which is, of course, fascinating by itself, Beattie gives grisly details as to the evidence of cannibalism among the crew (p. 61), information on the sloppy soldering of the tin food cans (p. 113), and the rushed work of the Stephan Goldner company to fill the order for the canned foods (p. 159). A recreation of 20-year-old Chief Stoker John Torrington is described which even uses evidence found in his grave to show it was snowing lightly the day of his burial (pp. 123-7). It is unbelievable what scientists can find! One item I had not read before was that the odd choice of scriptures engraved on the headstones caused the team to first suspect foul play as the cause of the deaths (p. 93). The graves are a time capsule, and the Beattie team did an excellent job of learning from them yet also honoring them. The book includes amazing color photos of the bodies. I have the 1987 out-of-print 180-page edition. This new edition a

Published by Thriftbooks.com User , 18 years ago
This book was great and I hope you will check it out! It gave great detail to the 1984-6 expeditions headed by Owen Beattie that searched into the fatal artic expedition of 1845. In 1845, Sir John Franklin, known for his previous polar exploration, took two ships and 128 crew members into the icy north. Their goal was to find a northwest passage above Canada, but nobody ever heard from them again. Many have tried to solve the mystery, and much information has been handed down through time, but Beattie's group was the first which found traces of lead poisoning, which led them to believe that faulty food containers may have added to the loss of the men from these expedition. The most interesting thing about the book is the detailed explanations of exhuming the graves of three sailors from Sir Franklin's failed attempt. Pictures add to the excitement and looking into the frozen faces of men who died 150 years ago, excite the imagination. You will also be left with a feeling of sadness at the terrible fate of those men and all who perished with them in the arctic wilderness. May they rest in peace.

A Well-Researched Book on the tragic Franklin Expedition.

Published by Thriftbooks.com User , 22 years ago
This book provides an in-depth look into what really happened to the Franklin expedition when it left England in 1845 with 2 ships: the Erebus and the Terror. Led by Sir John Franklin, 129 men set sail in search for the Northwest Passage in the labyrinth of the Canada's arctic archipelago, the expedition boasted the most technologically advanced ship at that time with thousands of provisions that was to last for three years. After four years with no word from the expedition, the Royal Navy and the public decided to launch several search and rescue expeditions to locate the lost expedition. For several years, the rescue expeditions yielded only bits and pieces of the expedition's final days. One of the most significant finds in these rescue expeditions were 3 well-preserved corpses (due to the cold temperatures) of the Franklin expedition buried in one of the small rock islands dotting arctic Canada. Thus begin's the books forensic investigation as to what happened to the Franklin expedition. Beattie and his team exhumes the 3 corpses and conducts extensive autopsies of the remains. The book will make the reader feel as if he/she is part of the team. It never leaves the reader out of touch but rather it brings the reader into the experiences which the researchers felt as they moved closer to the truth. Great reading! One of the best true adventure books I have ever read. Pick it up!

An excellent, informative and touching read

Published by Thriftbooks.com User , 23 years ago
I first bought this book in the UK, read it and re-read it a number of times. I originally had no interest in this subject, but now, due to the excellent presentation, I find myself thinking of the hardships those men went through. I moved to the US and left the book behind. I now find myself desperately seeking a copy. That is the impact of this book. It's images will stay with the reader for the rest of their lives.
Trustpilot
Copyright © 2022 Thriftbooks.com Terms of Use | Privacy Policy | Do Not Sell My Personal Information | Cookie Preferences | Accessibility Statement
ThriftBooks® and the ThriftBooks® logo are registered trademarks of Thrift Books Global, LLC