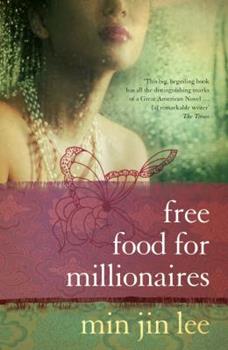 In this One Book, One New York 2019 nominee from the author of National Book Award Finalist Pachinko , the Korean-American daughter of first-generation immigrants strives to join Manhattan's inner... This description may be from another edition of this product.

Published by Thriftbooks.com User , 14 years ago
Min Jin Lee's Free Food for Millionaires is a novel you want to immediately read again after the first read. It is written with salty wit and texture, with moments that are breath taking and unexpected. The characters are rich and familiar - I especially was taken by Leah. A coming of age book that that is at once classic and modern, and addresses a wide age group. Recommended.

Published by Thriftbooks.com User , 14 years ago
Reviewed by Cherie Fisher for Reader Views (6/07) Min Jin Lee's debut novel "Free Food for Millionaires" is masterful storytelling. She cleverly weaves complex relationships into a story about success, high fashion, competition, heartbreak and introspection. The story begins when Casey Han returns home to her small family apartment in New York after she graduates from Princeton. Casey and her family are from Korea and her parents have worked hard at their jobs to ensure that both of their daughters would be able to get a wonderful education and have great careers. Casey has been accepted into Law School but has decided to defer her entrance for one year to get some life experience. Her father disagrees with this decision and this leads to a terrible falling out. Casey figures that she will move in with her boyfriend Jay, but things fall apart there too when Casey walks in on him doing the unthinkable. So she strikes out on her own with help from Ella, a friend who has always looked up to Casey. With assistance from Ella's fiancé, Casey lands a job with Kearn Davis as a sales assistant and she continues to work for her friend Sabine who owns an upscale department store. Casey loves expensive things and continually gets herself in over her head financially throughout the story. As Casey spends more time in the world that she worked so hard at school to join, she begins to question the shallowness of it and is not sure that the money earned is worth the sacrifices that a person must make. "Free Food for Millionaires" is not just about Casey Han. Min Jin Lee also writes from the perspective of the people closest to Casey; this gives the book additional depth and perspective. She shows human beings at their best and worst and still manages to make them very likable. I found this book to be very well-written and rich in culture and human dimension. Women of all ages will enjoy this story. I look forward to more books from the author. I think that "Free Food for Millionaires" would also make a great movie.

Published by Thriftbooks.com User , 14 years ago
Min Jin Lee's Free Food for Millionaires is a remarkable book. It is both incredibly compelling as storytelling-- I couldn't put it down--and it has layers upon layers of metaphor, cultural commentary and literary references (from Dante to the Bible) for those who want to look deeper. Any English professor (or book club leader) looking for literature that will inspire endless analysis--while entertaining readers with plenty of sex, humor and intrigue--need look no further. I was left hoping for a sequel. The characters are so colorfully and richly drawn that they come alive. The reader becomes completely invested in them and can't help but want to know about their futures. I know the Ivy League/Wall Street world she describes, and she captures it to perfection. While I generally prefer books to film or TV adaptations, this is tailor-made for an HBO series, and it would be brilliant. I must admit I am flummoxed by the comment of the reviewer who pegs the book for materialistic 20-somethings. As a professional in my 40s, it was clear to me that Ms. Lee's use of fashion, possessions and status was literary metaphor. Free Food for Millionaires is the farthest thing from "Chick Lit" there could ever be. For those looking simply for a wonderful yarn, it is all that and more. For the reader of literature seeking a book worthy of multiple reads and contemplation, Free Food for Millionaires will stand up to that scrutiny with ease.

Hats Off to Free Food for MIllionaires

Published by Thriftbooks.com User , 14 years ago
Thank you, Min Jin Lee, for writing this book. I was thoroughly fascinated by how flawlessly the author plucks you into the minds of each colorful, complex and beautifully-written character, making it impossible to put the book down. Casey Han is someone we all know, and can all relate to in one way or another-- prideful, fickle, neurotic, capable, and above all, enduring. At times you want to give her a big hug; others, you hate her for not realizing her talents & potential. The symbolism of hats to "crowns" adds a rich, lasting layer to this delicious treat. As a Korean American 20-something, I've never before felt so connected to characters in a novel-- I greedily devoured the book and didn't want the story to end. It made me smile each time something felt familiar-- whether it's trying to communicate with my own immigrant, very-Christian parents, or the experiences I've had with the elusive dating pool in NYC, Lee puts on paper (in a very precise, intelligent way, nonetheless) the things we know and feel but rarely able to acknowledge.

A Powerful Masterpiece of a First Novel Full of Rich, Realistic Family Drama

Published by Thriftbooks.com User , 14 years ago
Min Jin Lee's first novel is a wonder to sink intoæand be warned, once you start, it'll be hard to stop until you're done with this dense, richly told story of interweaving characters trying to find themselves in the supposed melting pot that is New York. Starting with fresh-out-of-college Casey Han, we meet the first of many who are struggling to figure out their place in the world. In Casey's case, this starts with her place in her family, and for talking back to her Korean father, she gets a slap across the face that catapults her out of the warmth of her family and into the world, learning the hard way about love, betrayal, jobs, Wall Street, and fidelity. The slapping scene seems to tilt around the room as Lee shows us each person's wishes as they unfold, making what could seem a horrific act one much more understandable. In Lee's hands, each character, no matter how small, gets to have their say, their slice of life, their point of view explained. It's to Lee's credit that she, as the storyteller, doesn't judge, but lets the reader draw their own conclusions about the values and choices each character makes. From Casey's traditional parents (even though we find out what lurks beneath their quiet mannerisms) to her gambler boyfriend and horny but likable boss, Lee paints a world where right and wrong blend and blur, stripping down these characters' lives until it's clear just how complex their inner turmoil and joy really are. While certain plotlines had me racing to get to their next installment (specifically, herpes-afflicted good girl Ella Shim as she emerges from her shell, becomes a mom, gets divorced, falls in love, and learns to stand up for herself), every strand here is woven so succinctly, everyone's actions dissected from varying viewpoints, that together they made the 500+ pages go by so quickly and made me want to know what happens next. Lee's descriptions are rich and vivid, from fancy gold courses to the interiors of a dry cleaner and Korean church, and by "interiors," I mean both the places, and the minds of the people who inhabit them. This is the kind of novel that sucks you in and doesn't let you out until you turn the last page, and even then, you'll want to know what decisions Casey and her friends and family will make (I for one would love to read a sequel, though the book is complete on its own). Lee isn't here to give us a moral lesson, but to point to the flaws we all have and share a gripping story with very human drama that needs no fanciful embellishment to be very, very real.
Copyright © 2022 Thriftbooks.com Terms of Use | Privacy Policy | Do Not Sell My Personal Information | Accessibility Statement
ThriftBooks® and the ThriftBooks® logo are registered trademarks of Thrift Books Global, LLC