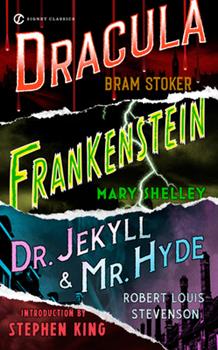 A scientist oversteps the bounds of conscience and brings to life a tortured creation. A young adventurer succumbs to the night world of a diabolic count. A man of medicine explores his darker side only to fall prey to it. They are the legendary tales that have held readers spellbound for more than a century. The titles alone - Frankenstein, Dracula, and Dr. Jeckyll and Mr. Hyde - have become part of a universal language that serves to put a monster's...

Published by Lepracy , 11 days ago
I ordered this book because of the cool front cover to these spooky stories, but I was shipped a different looking book. The ISBNs are identical, so I don’t know if it was a mistake on shipping or a mistake on the online description. The book came in good condition, however, I would love to get this awesome cover, that was the whole reason why I bought this version of the book.

Published by Thriftbooks.com User , 11 years ago
This is a good deal being three books in one. Frankenstein exposes the dangers of playing God, an timely lesson for embryonic stem cell research advocates. Dr. Jekyll and Mr. Hyde explorers our dual natures and how our carnal side cause shame and hatred. And Dracula is just a story with no particular over-arching theme but is fun to read being the original vampire novel.

Three in One Classics

Published by Thriftbooks.com User , 12 years ago
Frankenstein, Dracula, Dr. Jekyll and Mr. Hyde / 0-451-52363-6 Foundational works of horror, and the inspiration for dozens if nor hundreds of movies, the classic three are packaged here together in an attractive tight package. Frankenstein is something of a love-it-or-hate-it work and I will confess of falling on the more heretical side of that equation - there's a strong didactic feel to the work and Shelley comes off a little too hand-wringing and pearl-clutching for my taste. All well and good to create a monster who is turned evil by society, but the author really must trust the reader to understand this on their own, without little "this means, of course..." moralizing asides every five pages. However, if you can get past Shelley's distracting narrative lurches, the story itself is quite superb. Dracula, arguably *the* foundational vampire novel, is included here and shows off the diarist form of narration so popular at the time. ("Dear diary, you won't BELIEVE who just materialized in my room...") This is always an interesting tact for a horror novel because it can mean that the suspense is lost (if you're alive enough to write the diary entry, then where is the drama?) but Stoker bypasses this problem nicely - the race here is not to "stop the vampire" or "stay alive" but rather to hunt and destroy the vampire forever, before Mrs. Harker can be completely corrupted. The hunt is a superb one, although I am biased - Dracula is one of my favorite classics. Last, but never least, is Dr. Jekyll and Mr. Hyde. This short story is surprisingly short indeed, and it is a testament to how superbly the story is written that this short story has inspired so many movies and dramas. This is a wonderful addition to any collection and it is delightful that it is included here.

Published by Thriftbooks.com User , 14 years ago
Back in 1992 I was forced to buy this little paperback for a class called Literature of Terror. The class turned out to be pretty lame, but the book remains with me to this day -- battered, dog-eared and beloved. Most college textbooks are nothing more than extortionately priced trash, but this one packs a three-punch combination: three of the Great horror novels of English literature in one binding. For openers we get Bram Stoker's DRACULA, arguably one of the ten most famous books ever written. Despite being written in the epistolary style -- that is, as a series of letters penned by various characters in the books -- the novel is highly entertaining, especially the opening chapters, which are set in Transylvania and achieve a remarkable atmosphere of brooding intensity. We are so inundated with vampires nowadays -- the BLADE trilogy, the television shows BUFFY and ANGEL, the UNDERWORLD series, not to mention Anne Rice's seemingly endless parade of Lestat novels -- that it is sometimes difficult to remember that Stoker's book, while not the first vampire tale, singlehandedly invented the genre -- not only the immortal Dracula character, but most of the lore that surrounds vampires generally. Next up is the book everybody knows about but nobody has read, Mary Shelly's FRANKENSTEIN, which if it had been called FRANKENSTEIN'S MONSTER would have spared everyone of that name a lot of suffering as children ("Frankenstein was the scientist, you bastards, not the frickin' monster!"). Shelly's ornate, very 19th century prose is not easy on the reader, although there are passages which are so beautifully written they resemble poetry ("I collected bones from charnel houses, and disturbed, with profane fingers, the tremendous secrets of the human frame") and there more than a few preposterous plot developments and tedious Victorian asides; but as a moral tale about the price of hubris and the desire to play god, it hardly has an equal. In any case, readers will be interested to see that Shelly's monster is not the mute, shovel-headed zombie of the black-and-white films, but an intelligent being whose desire for revenge, rather than the manner of its creation, makes it a monster. The closer is Robert Louis Stevenson's DR. JEKYLL AND MR. HYDE, the shortest and, in my opinion, the easiest read of the three novels. Like FRANKENSTEIN, HYDE is a moral tale, rendering a harsh verdict on Victorian hypocrisy and on the human desire to have one's cake and eat it too. Poor Dr. Jekyll is handcuffed by convention; he cannot satisfy his ungentlemanly appetites without ruining the angelic public image he has worked so hard to create. So like an American politician, he spends his days kissing babies and his nights (as Mr. Hyde) chasing babes, only to discover that his nifty little potion has a nasty drawback ("Side effects may include shape-shifting and homicidal mania. Do not take the potion if you are evil, or have a tendency to become evil.") Though he lived in an

Published by Thriftbooks.com User , 17 years ago
There is an introduction written by Stephen King but it adds some to the stories themselves as it places them within historical context. But if you are a first time reader of these stories be warned there are no footnotes, endnotes, or explanations of unfamiliar terms - so you could find yourself at a bit of a loss. The book contains the third edition of "Frankenstein" originally published in 1831, I understand from other readings that Shelley made some changes in the text itself. The third, and last, edition includes the introduction she finally wrote for the novel. For the experienced gothic reader or the novice willing to look up unfamiliar words, this book is a treasure as it has the three most famous and chilling gothic stories of the 19th century. Enjoy them thoroughly and chillingly.

Published by Thriftbooks.com User , 21 years ago
Three classics books, three classic monsters, and three classic stories that have been told and retold time and time again, all here in one great book! I'm sure you Horror Film fans like me have seen the Boris Karloff Frankenstein, the Bela Lugosi Dracula, and the Fredric March Dr. Jekyll and Mr. Hyde, but if you haven't read the original novels...YOU AIN'T SEEN OR READ NOTHING YET! Buy this book now, you won't regret it!
Copyright © 2020 Thriftbooks.com Terms of Use | Privacy Policy | Do Not Sell My Personal Information | Accessibility Statement
ThriftBooks® and the ThriftBooks® logo are registered trademarks of Thrift Books Global, LLC