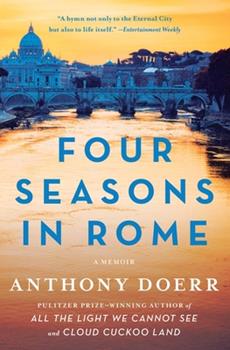 Four Seasons in Rome: On Twins, Insomnia, and the Biggest Funeral in the History of the World

From the author of the acclaimed Pulitzer Prize-winning #1 New York Times bestseller All the Light We Cannot See , a "dazzling" (Azar Nafisi, author of Reading Lolita in Tehran ) memoir about art and adventures in Rome. Anthony Doerr has received many awards--from the New York Public Library, the National Endowment for the Arts, and the American Library Association. Then came the Rome Prize, one of the most prestigious awards from the American Academy...

Published by Thriftbooks.com User , 14 years ago
If you have ever had children...if you have travelled or want to travel to Europe...you should read this book! It is a relatively quick read, which is good for busy people - you won't be able to put it down. Anthony Doerr recognized a once-in-a-lifetime opportunity, that happened to come along at a most inopportune time, and grabbed it. On the day his twin sons were born, Mr. Doerr received notification that he had received a grant to study or work at pretty much whatever he wanted for a year in Rome. Luckily his wife Shauna also must have recognized the necessity of grabbing this chance while it was available, and so they packed up their babies and traveled from Boise to Rome. Lucky for us, he decided to spend part of his time constructing this memoir. After reading Doerr's elegant, evocative prose, it's easy to see why the powers-that-be decided that his gift should be nurtured. He is just as awed by the adventure of raising his children as by the experience of living in Rome. Unlike other books in this very broad genre of expat memoir, Doerr does not focus on the quirks and foibles of the Italians. Rather, he describes his own little circle of family, friends and acquaintances and frequently lapses into long lyrical musings on historical events, nature, or whatever happens to strike his fancy. "The Biggest Funeral in the History of the World," aka the funeral of Pope John Paul II, is not treated as a gigantic pageant, despite the hyperbolic title. Through Doerr's eyes it is a profoundly moving and inclusive experience shared by millions. I loved this book. It is the kind of book you want to urge your friends and loved ones to read, to give as a gift. I look forward to reading much more from this gifted and warm writer.

Published by Thriftbooks.com User , 14 years ago
This was one of the best books I've read in a long time. I've never read any of Mr Doerr's books before, but his style and thought and descriptions were so absorbing.....being a grandmother of three, two of them small boys, I loved every word of his descriptions of his sons. Also being a raging italophile, I loved the descriptions of Rome and the countryside as well, let alone he and his wife's bravery at moving to a foreign coumtry with not one, but two newborns! I highly recommend this book.....and look forward to reading it again myself.

An excellent and easy read.

Published by Thriftbooks.com User , 14 years ago
I don't read much -- I have a really short attention span -- but anything about Rome usually catches my attention. I've been there a few times and have absolutely fallen in love with that city. Some travelogs about Rome are too highbrow for me, or a little too intellectual, so I'm always searching for non-fiction that conveys a real sense of the city. This book did it. It's very easy to read, and the author so perfectly nails the details about the city (and even gave me a few clues about new things to go and see that I haven't seen before!). The way he describes the nuances of each season makes me crave a return trip. It's a beautifully-written book, for anyone who loves Rome, or for anyone who's curious about visiting this most amazing city.

Published by Thriftbooks.com User , 14 years ago
I purchased "Four Season in Rome" after hearing an interview with Anthony Doerr on NPR. My oldest son has just completed 5 years of studies in Rome and I have been there to visit him many times. I hoped that the book would evoke memories of my trips and of his experiences living there; it did...and more so! While Mr. Doerr is more than kind to both the city and to Romans in general, he does paint a vivid and fascinating picture of this most unusual and unforgettable city. And as a BONUS the book is as much about raising twin boys as it is about the city! In short, I loved it and I will be purchasing more copies for Christmas gifts to family members who also love Rome AND who happen to have twins, as well!

Published by Thriftbooks.com User , 14 years ago
In a word, fantastic. Perhaps the clearest tribute is that I've never been to Rome, raised children, nor tried to write a novel, yet still found this book to be wonderfully compelling. "Four Seasons in Rome" is alternatively hysterical and poignant, and always beautifully written. Doerr - an accomplished fiction writer - couldn't have made a smoother transition to a new genre. In fact, his nearly super human powers of perception are especially well-suited for describing and bringing to life the sounds, smells, feel, and wonder of everday Rome. A perfect reminder of the beauty of the seemingly mundane. And a perfect summer read for just about anyone.
Copyright © 2020 Thriftbooks.com Terms of Use | Privacy Policy | Do Not Sell My Personal Information | Accessibility Statement
ThriftBooks® and the ThriftBooks® logo are registered trademarks of Thrift Books Global, LLC