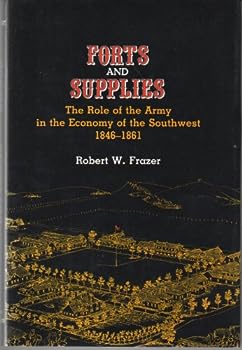 1st Edition. 253 pp. Dust jacket, illus.,map, tables. A detailed account of the military supported economy of the Southwest. This description may be from another edition of this product.

How the west was really won

Published by Thriftbooks.com User , 13 years ago
How the west was really won This was required reading for a graduate course in the history of American military affairs. Robert Frazer's Forts and Supplies is a quantitative analysis of how military spending contributed to the economic development of the frontier, specifically in the Southwest. Forts and Supplies is an excellent example of economic history, and Frazer contends that between 1846 and 1861, "the army was the single most significant factor in the economic development of the Southwest." Frazer proves this assertion by showing the army's involvement in mining, agriculture, and ranching, and his work also explores how the army introduced money into the local market and fostered increased production. His book also focuses on a specific topic, specifically on the Corps of Topographical Engineers' role in westward expansion. Frazer is most interested in how the Corps' actions and experiments "had utility and meaning for the country as a whole," and he argues the entire nation's "total body of knowledge increased as a result of the army's work on the frontier. His evidence includes the army's involvement in surveying, mapping, and determining boundaries on the western frontier. Frazer's book contributes to our understanding of the army's involvement in the American West. Recommended reading for anyone interested in military history, and American history.
Trustpilot
Copyright © 2022 Thriftbooks.com Terms of Use | Privacy Policy | Do Not Sell or Share My Personal Information | Accessibility Statement
ThriftBooks® and the ThriftBooks® logo are registered trademarks of Thrift Books Global, LLC