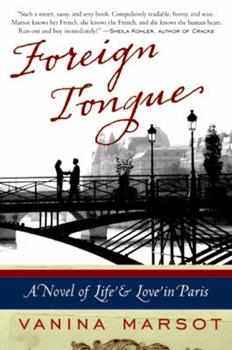 Foreign Tongue: A Novel of Life and Love in Paris

Paris, the storybook capital of romance--of strolls down cobblestone streets and kisses by the Seine--may not be the ideal location to mend a wounded heart. But pragmatic professional writer Anna, who has been unlucky in love in L.A., has come here with keys to her aunt's empty apartment. Bilingual and blessed with dual citizenship, she seeks solace in the delectable pastries, in the company of old friends, and in her exciting new job: translating...

Gorgeous novel by a writer's writer

Published by Thriftbooks.com User , 13 years ago
"Foreign Tongue" is a writer's novel, the art of it quietly brilliant. It takes what seems like an ordinary plot about a breakup and turns it into a trans-Atlantic search for meaning ... through words. Anna is bookish, smart, funny, sassy, yet a bumbler when it comes to men and love. The cure for her self absorption presents itself in the form of an erotic French novel by anonyme, which she is commissioned to translate. The mysterious novel, and the city of Paris (which remains unknowable and impenetrable to most foreigners), allow Anna -- who is split down the middle as a bilingual, dual-national woman -- to bring all the parts of herself together. Marsot, a French-Egyptian American knows Paris in ways no other American writer can know it. This is a gorgeous novel, for those who long to lose and find themselves on foreign soil.

Published by Thriftbooks.com User , 13 years ago
A provocative romp! An unexpected trip to Paris! Meeting interesting new people and remembering what single love felt like. Reading Foreign Tongue was all of this and more for me - a septuagenarian. And then the chance to enjoy the nuances of the language I used to speak and know so well. It was plainly and simply a great surprise. The book was also full of intrigue and interesting insights and metaphors, interweaving two stories very skillfully. I really didn't want it to end.[ASIN:0061673668 Foreign Tongue:A Novel of Life and Love in Paris]

Almost as good as a trip to Paris

Published by Thriftbooks.com User , 13 years ago
As a former Paris bureau chief for Newsweek who never left the place it was a great pleasure for me to read a book that gets it just right on the French, their language, their culture and lifestyle, their charm and their foibles and how all that plays with American counterparts. Vanina Marsot has written an insightful and funny book. She knows Paris inside out. If you read one book on France this year, read this one.

Published by Thriftbooks.com User , 13 years ago
This book is great. The very endearing main character, Anna, whose behavior fluctuates from seriousness to slapstick and back asks lots of questions about life and even finds some answers. I found `Foreign Tongues' fantastically pertinent, sassy and at the same time grave. It made me laugh out loud and also cry. I was so absorbed reading it, I even missed my metro stop! Paris is wonderfully portrayed and perfectly believeable. A novel full of life. I recommend it highly. Bravo.

A multi-layered mille-feuilles of a book!

Published by Thriftbooks.com User , 13 years ago
"Foreign Tongue" is the story of a young woman, Anna, who has both American and French citizenship. She has left California for Paris to nurse a broken heart. While there, she finds work translating an erotic novel, which ushers her into literary circles and possibly, the arms of a new lover. It may sound lighthearted, but as its layers unfold, it becomes a chiaroscuro of suspense, passion, intellect and rich imagery. READ THIS BOOK!! It's so good that I had to force myself to STOP reading it because then it would be over! I've sent copies to several friends so we can talk (and talk and talk) about it. Vanina Marsot, the author, is fearless. She is willing to lay herself open, to allow herself to be exposed, as the best of actors do. At the same time, she is brilliant and worldly. This combination makes the book at once raw and sophisticated. It's truly a perfect book, satisfying one fully in mind, soul, heart and libido in the way that Thai spices are meant to touch all the taste buds. The discussions on language link the two cultures together, yet show their fascinating differences, providing food for the mind. The soul is in the friendships, the characters and how Anna goes deep to find connection, clarity and meaning. The heart is engaged by the love that Anna has for her friends, her lovers, her city; for words and language and for the cultural duality inside of her. She is both part of the two cultures, yet apart, and her aloneness tugs at one's heart. Then there's the libido! She surrenders herself again to love with such joy. Her Parisian lover is described so sensuously that you can actually breathe in his smell. There's a wonderful contrast between the luscious descriptions of sex and love and the almost clinical musings on the meanings and sounds of sexual terms and how they must be translated. The writing floored me. I had to tag some of the descriptions. Like the French confections that Anna delights in, the descriptions of which made me salivate, I need to return for another taste! Here's one: "My thoughts went to Timothy, the way a tongue searches out a painful tooth, stupidly and relentlessly." Another describes how the chairs in a picture window are "lit like a Hurrell model". In another, Marsot notes how the afternoon light casts "spindly Giacometti shadows behind the pedestrians." That's probably my favorite. Marsot somehow achieves a literary voice that is both economic and rich. It MUST become a movie because it is begging to live visually. The food, the places, the clothing that the characters wear -- it is all so vibrant. Like New York is for "Sex and the City", Paris is a main character for "Foreign Tongue". Yet in "Foreign Tongue", it is even more so, because Paris is humanized, made accessible. SATC did that in the early years, back when the clothes came from boutiques. When the designer labels started popping out all over, it lost some of that, some of its vulnerability. The characters are perfectly drawn. Th
Trustpilot
Copyright © 2022 Thriftbooks.com Terms of Use | Privacy Policy | Do Not Sell or Share My Personal Information | Accessibility Statement
ThriftBooks® and the ThriftBooks® logo are registered trademarks of Thrift Books Global, LLC