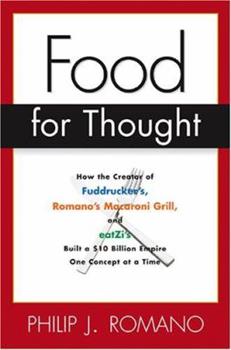 Food for Thought: How the Creator of Fuddrucker's, Romano's Macroni Grill, and eatZi's Built a $10 Billion Empire One Concept at a Time

Known as the Steven Spielberg of the restaurant industry, Phil Romano has achieved a higher rate of success than any other restaurateur in history - it's estimated that 200,000 people in 48 states and 8 foreign countries eat daily in a Phil Romano eatery. Over the past 40 years, restaurateur Phil Romano has amassed an amazing string of successes in the restaurant industry, and is lauded as the most creative showman in food services, having launched...

Published by Thriftbooks.com User , 15 years ago
Romano has built one of the great food empires and keeps on creating more. He has had over 25 different restaurant concepts and has made billions. He focuses on the creative content and the principles that have created hit after hit. He also analyzes his failures and the reason for why they failed. While Fuddruckers is arguably his most successful Romano's Macaroni grill has also prospered and even though both were sold off reading about their beginning was fascinating. His newest restaurant EatZi's is a great idea that combines upscale grocery store with eating experience. It will be interesting to see if this idea takes off outside of the large cities it is being tired in but overall this book will fascinate you and leave you wanting to start a restaurant of your own.

Published by Thriftbooks.com User , 15 years ago
If you're in business, any business you can learn from Phil Romano. His grandmother taught him early about visualization, saying, "Talk of the devil and he will appear, talk about failure and it will happen, talk about success and you'll have it." Phil never worked in a restaurant before owning one and has never relied on anyone but himself for a paycheck. As I always like to point out in my reviews and my Blog (The Real Estate Investors Blog) there are several invaluable techniques as far as deal structure. Starting with the structure of Fuddruckers: After being turned down for a bank loan Phil rounded up 10 investors at $15,000 a pop and gave them 48% and kept 52% for himself. So they put up the money and he ran it and called the shots. That 15k grew to $3.4 million in less than 2 years. This was his 12th restaurant concept and he walked away with $17 million. His next move is mind boggling. He invested $250k to back the investors of the heart stint and walked away with $165 million over the next 17 years or thereabouts. Then he's on to The Macaroni Grill, buying entire towns and toying with different concepts. He took a gas station from doing $500k in revenues to $5 million. Then there's Nachomama's, Spegeddies and EatZi's a 50/50 partnership with Phil and Brinker which was doing $3,000 per sq. foot in sales. Everything from the structure, the numbers and the margins are described. Some Romano-isms: "I've come to learn that creativity is mostly about identifying a problem and, instead of just living with it, coming up with a solution. Too many companies are resigned to working around problems instead of really addressing their cause." "I don't predict the future; I imagine it. And my imagination has no bounds. Neither should yours." "If you make a mistake in hiring someone, don't make the mistake in waiting too long to let them go. The problem will just get bigger and bigger." "Throughout my life, I've often been asked why I don't do things by the book. Well, it's because "the book" is for people who aren't creative enough to figure out a better way." "I've had my share of failures, most of which have been outlined in these pages. But something inside me has always said to get up, dust off, and move onto the next challenge with a positive attitude. Life is far to short to dwel on bad calls you've maid. Negative thinking can kill you, and it can infect others." "I advise people in the restaurant business to dream big, imagine their success, and imagine the success of the employees around them. Negative thinking is toxic." I bought the book for several of my friends, family and partners who are in the service industry and truly recommend it. By Kevin Kingston, author of: A 20,000% Gain in Real Estate: A True Story About the Ups and Downs From Wall Street to Real Estate Leading to Phenomenal Returns

Published by Thriftbooks.com User , 16 years ago
Philip J. Romano is "an idea man at heart." The innovative restaurateur launched multiple successful U.S. franchises, including Fuddruckers and Romano's Macaroni Grill. He discovered that people would pay for his concepts, so he kept thinking and opening new restaurants. In this chatty, inside-flavored autobiography, he shares his creative processes and the principles that guide his business decisions. He knows the hot dinner business cold, and doesn't mind saying so. We dish up this light, entertaining read to those who are interested in entrepreneurial success stories or to anyone who wants an insider's view of the restaurant business.

Published by Thriftbooks.com User , 17 years ago
I love reading about the creativity behind the business. I admire someone who has the courage to follow through on his inspiration. Phil Romano did it over and over again. I do believe that he puts service before profit -- the proof is in the restaurants themselves. This book makes me curious about the ones I haven't tried yet, and I'm waiting for what's next. I even culled some business tips -- some rules to live by. I definitely recommend this book to anyone looking for some inspiration, a good story, and some sound business moves.

Published by Thriftbooks.com User , 17 years ago
I just recently read WINNING by Jack Welch and I have to tell you that book is just a good. It is a real quick read and there was so much great info from front to cover. And, it is actually quite funny. I reccommend this book as a great summer read.
Trustpilot
Copyright © 2022 Thriftbooks.com Terms of Use | Privacy Policy | Do Not Sell My Personal Information | Accessibility Statement
ThriftBooks® and the ThriftBooks® logo are registered trademarks of Thrift Books Global, LLC