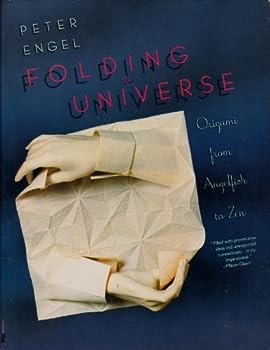 Folding the Universe: Origami From Angelfish to Zen

"This splendidly written, richly illustrated book is unlike any ever written about origami." — Martin Gardner. A celebrated origami artist explores the secrets of Japanese paperfolding and explains... This description may be from another edition of this product.

A must have for the avid folder

Published by Thriftbooks.com User , 20 years ago
The first half of this book is completly narrative. It explains origami in a way no other book I've read has. By showing the traditional bases as variations on a theme and then extending that theme Engel shows origami creators (not just folders) how to overcome the limitations in a piece of paper. The ties to music, fractals, geometry, the act of creation, the boundry of science and art, and computers really gets you thinking. The narrative is nice for the beginner and the advanced folder.After the narrative is the more traditional diagrams for folding models. Except for a few these models are ONLY for the advanced folder. Some models include (all folded from one sheet of square or dollar bill paper without cutting) a 10 legged crab with antenna and larger forclaws, a horse and rider, a kangaroo with a smaller kangaroo in its pouch, Octopus with 8 tenticles. There are also some only moderatly advanced such as fish, reindeer, elephant, yacht, penguin, hummingbird, etc.Among Origami books I have read the only one to hold a candle to this is Origami Omnibus. Both are stellar works, but this is my favorite of the two.

Engel's unique perspective brings out the art in origami

Published by Thriftbooks.com User , 22 years ago
Never before have I seen an origami book that brings in so much art, design, and mathematics. Not only does Engel make incredible and very challenging origami, but his sense of design makes it a delight to see come about. His first 81 pages are introduction and theoretical discussion of origami and the design concepts behind the artform. While he may be a bit esoteric at times, his discussion is quite interesting as he delves into fields ranging from music to geometry to architecture. The models show wonderful 3-D realism for the most part and will pose a challenge to all but very advanced folders (and if you still need a challenge use smaller paper). I especially enjoyed the octopus, squid and knight on horseback.
Trustpilot
Copyright © 2022 Thriftbooks.com Terms of Use | Privacy Policy | Do Not Sell My Personal Information | Accessibility Statement
ThriftBooks® and the ThriftBooks® logo are registered trademarks of Thrift Books Global, LLC