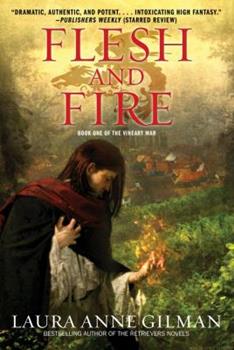 Flesh and Fire: Book One of The Vineart War

(Book #1 in the Vineart War Series)

From acclaimed bestselling author Laura Anne Gilman comes a unique and enthralling new story of fantasy and adventure, wine and magic, danger and hope....Once, all power in the Vin Lands was held by the prince-mages, who alone could craft spellwines, and selfishly used them to increase their own wealth and influence. But their abuse of power caused a demigod to break the Vine, shattering the power of the mages. Now, fourteen centuries later, it is...

Published by Thriftbooks.com User , 12 years ago
"Vinearts did not appear full-blown from the earth, after all. It was an ironic gift from Sin Washer: generations of trial and error had proven that only the deprivations of slavery, the removal of all family ties and comforts, pushed a man to the point where magic would surface. Even now, he could not coddle the boy, or risk ruining him. The skills were inherent and easily proven by the first test, but the refining of them required a combination of elements. . . Like the grapes themselves, a Vineart must be stressed to produce the finest results, grown in poor soils and subjected to the elements in order to shine." -Flesh and Fire: Book One of the Vineart War by Laura Anne Gilman Review: In their early history, magic in the Vin Lands flowed through the prince-mages who alone had the power to craft spellwines. But inevitably corruption and greed led to an abuse of power by the prince-mages and it took the intervention of a demi-god to "break the Vine" and thus destroy the prince-mages' hold on power. The system that evolved 1,400 years later established a clear separation of power between those that craft the spells from wines and wield the power of magic (the "Vinearts") and the nobility and royalty that hold political power. The split is deeply established. The Vinearts are entrenched in their customs and traditions in the selection, training and development of apprentice Vinearts and in the creation of the spellwines which serve as repositories of magic. It is universally understood that while stress and deprivation produce the magic and the Vineart, too much stress can ruin the man and his skills. The Vine Lands are hit with mysterious disappearances, magical monsters, and sudden plagues which seem to be the work of a dangerous new force. Only Master Vineart Malech seems aware of this new threat and he has only one weapon to use against it: the young slave Jerzy. Jerzy shows unusual promise and an uncanny sense of the Vinearts' craft which Master Malech must develop and strengthen. Malech is forced to cram the training that would span years in months and trust in Jerzy's skill and judgment if they are to save the Vine Lands. Review: In Flesh and Fire, Laura Anne Gilman has created a rich, complex fantasy world and a satifying and enjoyable read. I was hooked from the start - with the mysterious attack on Vineart Sionio and the first descriptions of the young slave boy Jerzy. Jerzy's voice is painfully honest and I quickly found myself emotionally invested in his growth and his success. As Jerzy grows into his role as apprentice to Vineart Malech, the tension in the story heightens. Plot twists and action move Flesh and Fire forward at a good pace. The only disappointment that I have is that I've finished the book and must wait for the next installment to learn how Jerzy and his new friends will rise to the challenge. I loved Flesh and Fire and recommend it highly to those who enjoy fantasy novels. This on

Published by Thriftbooks.com User , 12 years ago
Jerzy was a vineyard slave, who shockingly can perform the magic of the Vinearts who are the greatest mages. They create the spellwines from grapes. The Vinearts had in their way become somewhat arrogant as they forgot their roots fourteen centuries ago when Sin Washer overthrew the most powerful Prince-mages. Still Jerzy becomes an apprentice to the Master of the House of Malech. However, soon after Jerzy changes positions, someone begins destroying the grape vines of the prominent but cloistered winemakers. Jerzy and the Master begin to investigate who would be destroying a way of life. They begin to find proof that the culprit is a master magician on a par with the most experienced of the Vinearts. Soon afterward, Jerzy and the Master are in a fight for their lives with their lifestyle at stake from a potent magician who turns the fields into the grapes of wrath. The use of grape vines as the source of magic makes for an invigorating refreshing fantasy that will have the audience toasting Laura Anne Gilman for her vino veritas thriller. The cast is super especially Jerzy, his Master and, a young still houseless Master; they and others make FLESH AND FIRE an intoxicating read as the war of the grapes begins. Harriet Klausner

Published by Thriftbooks.com User , 12 years ago
Many fantasy stories are basic tales of good versus evil with strange and frightening races of beings fighting against good humanity. Throw in some magic, dragons, and some sword play and you have the basic tenets of this genre. This book has some of those things, but it is different and unique enough to be a fresh look at fantasty - and it is a good read that made me not want to put the book down! Imagine a world caught in the equivalent of our middle ages, but where there is an enforced separation between the magicians and those who wield power. Many years before, the powers were not separated and consequently the world came close to a cataclysm. The gods enforce the separation of power and the separation of church and state with a three way split: There are the local rulers; the priestly class; and the magicians who are a unique caste on to themselves. You see, the way magic works in this world is that it is a combination between the powers of the humans who are attuned to magic, and the grapes that they raise - yes, the magicians are vintners (called Vinearts here), and the only magic can be done is by sipping wine! To keep the vinearts humble, they are each brought up from slavery. They start out life as slaves and work in the fields of the established Vinearts. If they happen to sense the magic and are attuned to it, they move to become students of the vinearts, and, eventually, after much practice and learning, go off to establish their own wineries and have their own slaves. So it has been for over 1500 years when our story commences: We follow the life of Jerzy, a 14 yeard old slave who is working in the vineyards of the House of Malech when he and the Vineart discover his affinity of magic. This changes his status to that of a student and we read about how he learns to tend to the grapes and to make wine, and how the Vinearts bring out the magic in the grapes and shape it so they can sell their spellwines to any bidders. It is clear that the author know a lot about the wine making progress as she incorporates this knowledge into this story in a gentle way. So, a secondary benefit of reading this story is learning about how wine is made! But there is also a backstory here: Strange things are happening in the world. Things that have never been seen before. Strange beasts come out of the oceans, or the fields and attack people. We read about a whole island that decides to escape the growing calamities and hides behind a magical curtain - effectively disappearing from the world. We also read of other strange occurences that imply that some thing bad is happening. Yet none of it is simple to figure out, and most of it could simply be a series of bad luck. Nonetheless, Malech is suspicious and he tries to investigate what is going on and uses Jerzy to help. By the time we reach the end of this first volume in the series, it is clear that there is some sort of attack going on against the magic users - but it is not clear what and who are

Great Kickoff Into a New Universe

Published by Thriftbooks.com User , 12 years ago
Laura Anne Gilman has created a new concept in magic. In Flesh and Fire: Book One of The Vineart War, the source of magical power is grapes (very special grapes of diverse genetics) made into wine and then enspelled to specialize the raw magical power into useful forms. Once a Vine-art has enspelled a mature wine, it lasts about a year and allows those with no magical power to cast that one, prepared, spell the wine contains. A Vineart, however, can use even specialized wine to do -- well, we don't know the limits of what a Vineart might do yet. We live the lessons a young vineart in training goes through, the initiation by immersion in spelled wine, the visceral contact the young magician makes with the source of magic as he gains control over the power. We learn what it feels like to be a vineart. We also learn the cosmogany of this universe. Originally, magic was used by Prince-Mages, magicians who held political power, and their main occupation was war. A god sundered the bond between politics and magic, creating princes and vinearts, who were Commanded not to meddle in each others' affairs. Now, however, some magic that vinearts don't recognize is stirring, destroying villages, prompting Princes to change their personal character and act irrationally. With only occasional glimpses of the affairs of others, we follow Jerzy, the young magician's apprentice through his lessons and into his first field assignment in a royal court. Jerzy earnestly follows instructions and orders, and because of that is catapulted into the role of Hero on a journey we can see will be many novels in the telling. Frankly, I'm looking forward to more stories of the Vineart Wars, hoping we will follow Jerzy through his greatest epiphanies.

A Lovely Tale of wine and magic!

Published by Thriftbooks.com User , 12 years ago
Flesh and Fire Slow and easy, this is a well-thought out and extremely complicated story. I am not normally a sci-fi reader, but this book had me hooked from the start. Yes, it is a slow mover, but on a rainy day who wants a read that is too fast paced? I liked the characters and the way Ms. Gilman developed their personalities right away. The idea of a lowly slave being raised to a position of authority and responsibility is the fairy-tale effect that really makes this book work. Magic is always a fascinating subject and there is a little Harry Potter in us all, I think, that wants to believe. Given the subject matter here, of wine being the core of all magic, there is a touch of reality to this. I shall never drink of the grapes again without thinking of this story. Well done and recommended! Diane Davis White, Author, Moon of the Falling Leaves
Copyright © 2020 Thriftbooks.com Terms of Use | Privacy Policy | Do Not Sell My Personal Information | Accessibility Statement
ThriftBooks® and the ThriftBooks® logo are registered trademarks of Thrift Books Global, LLC