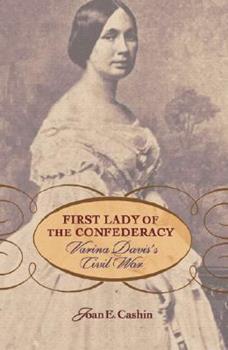 When Jefferson Davis became president of the Confederacy, his wife, Varina Howell Davis, reluctantly became the First Lady. For this highly intelligent, acutely observant woman, loyalty did not come easily: she spent long years struggling to reconcile her societal duties to her personal beliefs. Raised in Mississippi but educated in Philadelphia, and a long-time resident of Washington, D.C., Mrs. Davis never felt at ease in Richmond. During the war...

Published by Thriftbooks.com User , 13 years ago
Through her extensive research, much of which had not been used before, Ms. Cashin brings Varina Davis to life. The details of her marriage to Jefferson Davis, her serving as the First Lady of the Confederacy, and her life after the Civil War give the reader a great appreciation of Varina Davis and the struggles she faced throughout her life. This book is a must read for anyone who is interested in the personal stories of this critical time in American history. Bob and Cherie Allen-Authors A "Guest" of the Confederacy The Civil War Letters and Diaries of Alonzo M. Keeler, Captain, Company B, Twenty-second Michigan Infantry

Published by Thriftbooks.com User , 14 years ago
As has been mentioned in other reviews, there is a paucity of books on Varina Davis. Joan Cashin's book certainly fills that void. With all of the books on Mary Lincoln finally there is something about Varina Davis. Cashin has done her homework in research on her and clearly lays out her family's history and Varina's youth, exceptional education and marriage to Jefferson Davis. It is fascinating to read her letters to wives of famous men in history, some smuggled through the lines during the Civil War. She was well liked, well educated and certainly had mixed feelings about secession. Jefferson Davis does not fare well in this volume. He never appreciated Varina's intellegence or feelings. It seems then he needed her she was always there, but the opposite was rarely true. She endured her years in Richmond as some of her worst. After the war she suffered poverty and her husband's frequent trips. During much of his post war years he kept a semi-romantic relationship the a Mrs. Clay. Only after his death was Varina liberated from the imposed role of former Confederate First Lady. She moved to New York and established friendships with many former "enemies" such as Julia Grant, all to the distaste and chagrin of many former Rebel soldiers and the United Daughters of the Confederacy. A telling letter from about 1901, she related the the right side won the War. Varina endured all of this plus the deaths of many of her children with grace and dignity. It seems that maybe the Lincolns and Davis's married the wrong women. I enjoyed reading Cashin's very well book and would recommend it to anyone interested in the War or women in history.

Published by Thriftbooks.com User , 14 years ago
For many a year I had searched for a biography on Varina Howell Davis, without success, several novels existed but no biography. Now thanks to Professor Joan E. Cashin the first contemporary biography now resides on my Civil War shelf. But let's clear up a possible misunderstanding in at least one other review: Varina Howell WAS NOT born a Yankee, she was born an American citizen of Welsh decent at 'The Briars', near NATCHEZ, MISSISSIPPI, on 7 May 1826. She was very much a woman of the South, though she spent much time in the North due to Jefferson's political career, came to enjoy Washington, D.C., very much, even missed being in the North and Washington during the Civil War, but she felt it her duty as the wife of the president of the C.S.A. to support the Confederate cause. While she may have been ambivalent, she was no traitor to the South's cause. And to her betterment, she never truly seemed to feel any viseral 'hate' many Southerners felt for the so-called 'Yankees' as they incorrectly called all Northerners who were more to the truth, simply Unionists. Some unionists believed in slavery, some did not, however, all still believed in a Union from the 'founding fathers' rather than 'states rights' or nullification. Though she was unsure of the South's ability to win such a war, she stood by the cause. She was never a Northern spy, as some maliciously gossiped, but had seen and lived in the North, and realistically knew that 22,000,000 northerners existed to only 5,000,000 southerners, being certain the productive ability of the North would eventually overwhelm the capacity of the South. And by year's end of 1864, Varina in much anguish, truly wished the war and its suffering to end in a peaceful outcome. Later, on page 150, Mary Chestnut's words about Varina "Davis's prediction in 1860 that the whole thing would fail" are recalled. She also said Varina's "worst enemies had to grant her the gift of prophecy. But the book covers much more than just the Civil War years allowing Varina Davis to stand alone as her own woman. And what a woman she was: intelligent, educated, and a woman who was far more and far larger than her times. But like her heroine Mary, Queen of Scots, Varina's life was set upon by death and travail through the war and numerous times after the war. At times she felt she could take no more or that she would go mad, but somehow she always rebounded. One interesting item Varina mentioned was with Jefferson being blind in one eye and being gone much of the time, she had gotten proficient signing his name, so that many of the Confederate historical documents bearing his signatures, are in fact hers! Thank you professor for finally bringing this talented and interesting woman to life. Don't miss this exceptional biography. Why no book club picked this up is only to their shame. This book deserves a wide reading audience Semper Fi.

Published by Thriftbooks.com User , 15 years ago
This truly marvelous biography is a serious scholarly book about the educated and very modern, Varina Davis, First Lady of the Confederacy. A born Yankee and a Confederate by marriage, Mrs. Davis struggles to find her way, caught between being the dutiful wife of Jefferson Davis and having the conviction that the Confederacy was a lost cause. In reading this, you will learn as I did, about Varina's northern friends and her connection to both Mary Lincoln's seamstress (Elizabeth Keckley) and Julia Grant, Ulysses S. Grant's wife. The book, a culmination of years and years of research, takes us through the perils of a lady who didn't lead the life she wanted and basically endured her marriage to a man who did not fully return her love. A "must read" for the person who endeavors to know the Civil War, even though they will find out as I did, that the First Lady of the Confederacy is a much more interesting study than her much more famous husband. Congratulations Professor Cashin for this outstanding book!

Published by Thriftbooks.com User , 15 years ago
I have always been curious about Varina Davis as so little is written about her. This account has been well researched and is a good read. It struck a chord with me as so many families during the Civil War had to deal with divisions in their families, and this book shows how painful this was for them. Varina was close to her Northern family, as they supported her when her father was unable to do so from his multiple financial misadventures. Her prominent family was involved in Delaware politics from before the Revolution, and yet she finds herself married to a man who would be the President of the Confederacy. After spending years in Washington DC as a hostess of note, she found it hard to leave some close friends behind. She worked at being a leader of the Confederate Ladies- even though she was greatly criticized for being to outspoken, to well educated, not having a "proper" sense of humor, and not being a classic Southern Beauty. She loved her children and was, along with Jefferson Davis, an overly indulgent parent. She loved her husband, although they had a stained marriage at times, as he also had difficulty dealing with a wife who had opinions that did not always mirror his opinions. She tried to support her husband through her mixed feelings about succession- she was a woman of her times-supporting slavery- seeing no other way to financial security, but would have been much happier if the South had just continued to compromise on issues instead of declaring succession. A difficult place to find yourself as a lady. I gained a different incite into the Civil War through Ms. Cashin's words and would recommend this to readers interested in the Civil War and Women's History.
Trustpilot
Copyright © 2022 Thriftbooks.com Terms of Use | Privacy Policy | Do Not Sell My Personal Information | Accessibility Statement
ThriftBooks® and the ThriftBooks® logo are registered trademarks of Thrift Books Global, LLC