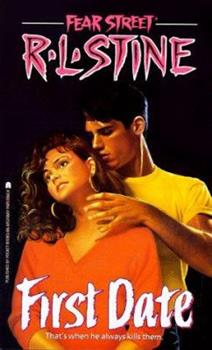 Fear Street -- where your worst nightmares live... Chelsea is the typical shy girl. Always home on a Saturday night, she would give anything to have her first date. Finally, Chelsea's luck begins to change when two new guys move into town and both ask her out. Too bad that one of Chelsea's new boys has a terrible hobby -- murder. Now Chelsea may be looking for love, but he's looking for a new victim. The Fear is Catching.

Her first date could prove to be fatal...

Published by Horror crazy , 4 months ago
Chelsea Richards is shy, lonely, and looking for love. When two handsome new guys ask her out, though, her first date could become a nightmare... Shortly after being invited on a date by both boys, a detective shows up at her door and warns her that they have tracked a serial murderer to Shadyside, a killer who claims his victims, teenage girls, on the first date! R.L. Stine surprises readers by revealing the killer’s identity and motive early in the book, but it doesn’t stop the story from being a fearsome, suspenseful page-turner. After all, we are kept dangling on his hook, trapped by the dreadful anticipation of wondering if Chelsea will discover the danger she faces in time to save herself—and others. For Fear Street fans, master of darkness R.L. Stine once again slams home a fiendishly suspenseful haunter that will keep you hanging onto the edge of your seat for dear life!

Published by Thriftbooks.com User , 14 years ago
This is the one of the many books of the Fear Street series, and it's really good. Fear Street is a series about scary and/or supernatural events that happen to teenagers in a ficitional town called Shadyside. In this book, a sweet, shy girl who has trouble with boys happens to meet two interesting ones. Too bad one's a deranged killer, the mystery is, which one? This has a pretty good twist ending and gives a good taste of future books in the series.Pulitizer material it's not, but for young teens, or anyone wanting a quick thrilling read, this suits the bill just fine.

One Of Stine's Best

Published by Thriftbooks.com User , 15 years ago
First Date is one of the best books in the Fear Street series. Although predictable, it still had style and substance, and actually contained some very suspensful parts, unlike other Fear Street books. The book describes 15 year old Chelsea Richards, a shy, lonley, high school student who is looking for love. She soon meets two boys, a 20 year old high school dropout by the name of Tim Sparks, and a new boy at school named Will Blakely. Soon both of them ask her out, although when she finds out the FBI are on the trail of a serial killer who looks alot like Tim Sparks, she rats him out and chooses to go on her first date with Will Blakely. Unfortunately for Chelsea, Will is the actual serial killer. His real name is Lonnie Mayes, and he kills girls who look like his mother or his sister in each town he visits. Will Chelsea's first date also be her last?

Good book, but not great

Published by Thriftbooks.com User , 23 years ago
This book was good, but he revealed the killer way too soon. I have read a ton of Stine's books, and this defiently wasn't his best book.

Published by Thriftbooks.com User , 24 years ago
I thought this was a great book even though I thought Stine should've kept the killer a secret. But like I said,it was a great book. R.L. Stine is the best and you'll agree when you read this book

Published by Thriftbooks.com User , 24 years ago
This book keeps the reader turning the pages from the begining to the end. The reader thinks the killer may be a number of people and finally you realize who it is
Copyright © 2020 Thriftbooks.com Terms of Use | Privacy Policy | Do Not Sell My Personal Information | Accessibility Statement
ThriftBooks® and the ThriftBooks® logo are registered trademarks of Thrift Books Global, LLC