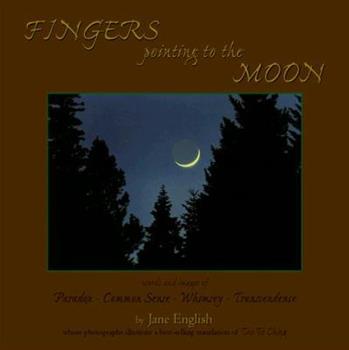 Fingers Pointing to the Moon: Words and Images of Paradox-Common Sense-Whimsy-Transcendence

A Zen story speaks of not mistaking a finger that points to the Moon for the Moon itself--a topic explored in photos, words, and paintings by the author. 50 photos, 30 in color. Line drawings.

An amazing writer's journey through life

Published by Thriftbooks.com User , 18 years ago
One of the facts offered up in _Fingers Pointing to the Moon_, Jane English's imaginative and discursive little autobiographical essay, is that she and Gia-fu Feng were married briefly in the early 1970s, and must have been in the early stages of their love relationship when they conceived and gave birth to their celebrated translation of the Tao Te Ching. They were married in a Buddhist ceremony on Christmas Day, 1970, by none other than Alan Watts. If you had to mark the official beginning of the "New Age," it would probably be that day.But the real love affair at the heart of this book is Jane English's love affair with the natural world. From her PhD in particle physics, to the way her photographs seem to caress the the objects in her camera's lens, to her statistical experiments with Tarot, to her fascination with Native American culture, to her dream-imagery, her way of looking at things is one of open-minded exploration and Whitmanlike love, tempered by a dry curiosity that raises her book above the level of popular science writing.I have to believe that English's upbringing in eastern Massachusetts, so near to Concord where Thoreau and Emerson walked, has something to do with the turn her mind took in the late 1970s, when, by her own account, she abandoned a career in physics for the uncertain freedom of the life of a photographer and artist. Some of her insights are as instantly illuminating as Emerson's are: for example, her thinking about the effect of her own cesarian birth on the development of her personality. If there is occasionally something a little arms-length and cool about these revelations, something of the eremite, it is the Concord influence coming through.Nothing in this book smacks of excuse-making, that bane of autobiographers. In her exploration of the things that have interested her over her lifetime, English simply states the phenomena and events -- sometimes rapturous, sometimes anxiety-ridden -- that have captured and held her attention. Finally, the artwork is simply wonderful. English has an amazing eye that sees the beauty -- and the comedy -- in the simplest of things. The fact that she has never been a celebrity, in the Oprahesque sense, demonstrates that she lives her life in accordance with the ideas she holds dear. She is a true philosopher.Highest recommendation.
Trustpilot
Copyright © 2022 Thriftbooks.com Terms of Use | Privacy Policy | Do Not Sell or Share My Personal Information | Accessibility Statement
ThriftBooks® and the ThriftBooks® logo are registered trademarks of Thrift Books Global, LLC