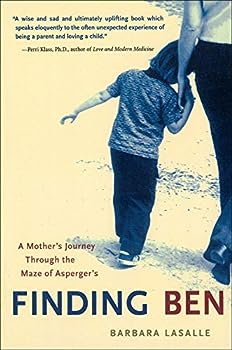 Finding Ben : A Mother's Journey Through the Maze of Asperger's

Barbara LaSalle's new book . . . beautifully chronicles her own journey to understand her son with the encyclopedic mind and distressingly separate world. --Washington Post Born with a superanalytical... This description may be from another edition of this product.

Published by Thriftbooks.com User , 19 years ago
I have recently become involved in the life of a child with Asperger's Syndrome through my relationship with his father. After raising a "normal" child myself, I found myself drifting through this maze of "AS" that Barbara LaSalle describes in the book FINDING BEN. Her candid descriptions of her feelings and her realization of what she needed to do as a parent of her remarkable yet frustrating son helped me tremendous. I was on the brink of realizing that I needed to accept the "AS" child in my life as he was and not try to make him something he wasn't. This book helped me understand that I was on the right track, finally! I'm sure I'll still have frustrating days with our "Ben" but I will never again feel as though I'm alone in my struggles.The comments by Barbara's son, Ben, were wonderful and I can't thank him enough for being open about his feelings and his difficulties. He really is incredible. I emailed the author with a question of my own and received a quick and ready response within hours. How refreshing for me to be able to ask a question that has troubled me for months. You will find this book entertaining and informational even if Asperger's Syndrome is a brand new topic for you. And if you're a part of this world of "AS" people, it shouldn't disappoint you.

Published by Thriftbooks.com User , 19 years ago
When Benjamin Daniel was born in January of 1969, there was a paucity of resources and information available to lay persons about Asperger's Syndrome, which is a neurological condition on the austim spectrum. Ben was a highly verbal and gifted child. At 18 months, he taught himself to read from watching Sesame Street. At 19 months, Ben's family relocated from New Jersey to southern California. Ben remembers that trip and his first bedroom when he lived in the northeastern United States. A distinctive personality, Ben showed a high level of comprehension for most abstract concepts. He could navigate just about any place he was and he had a fondness for maps. He was inordinately attached to his "Child's History of the World" and "Child's Geography" books and avidly read them each night. Nonathletic, Ben compensated by memorizing Dodger ball games he heard on the radio. A brilliant mimic with an extraordinary memory, Ben could repeat long passages from TV programs, conversations and written material. In childlike role play with peers, he always insisted on being a television or radio and he preferred reading to playing with other children. He also spoke in a formal style, not unlike an adult ("hello, my name is Benjamin and I am very pleased to meet you.") He had a high sensitivity to sound; when he was as young as one year old, he would implore his parents not to fight because "it's too loud and I don't like loud." I like the way Ben's father Steven was honest with him about the marital discord and told him that yes, they were indeed fighting. I also like the way he reassured Ben after the decision to get divorced was made. Ben's problems were not confined to the obvious challenges of having Asperger's. Ben's mother Barbara LaSalle admitted being unable to accept Ben for years and lamented Ben's inability to make friends from the time he was a pre-schooler. When forced into enduring a playdate at his home, I thought the playdate was really for the parents and not the children. That's why I just loved it when Ben, seeing an out, left the other boy alone so he could race off to his room and read. The other thing that puzzled me was when Ben's mother said that "baking cookies is something you do when your child has a playdate." That is not a social rule. Why not serve fruit to the kids instead? Making cookies was a voluntary decision, not a compulsory one. My feeling was why not just have store bought cookies ready to serve instead of leaving those two young children alone to bake? As I read that passage, I couldn't help wondering why the boys were left unsupervised. In retrospect, it seems like one approach would have been to be involved in what the boys were doing; to suggest alternate activies, e.g. "I'll set the timer and for 10 minutes will play outside doing something Greg wants. In 10 minutes Greg can pick a story and Ben can read to all of us," which encourages fairness, sharing and taking turns. Ben would try to appease h

Finding Ben: A Mother's Journey Through the Maze of Asperger

Published by Thriftbooks.com User , 19 years ago
Barbara LaSalle's book, "Finding Ben," is one that should be read by anyone who is dealing with pain in their lives which involves another person. It is the most courageous and honest story I've ever read. The author reaches deep into her soul and exposes both her own secrets and those of her son. And then finds a way out of the pain into love. It's a story of how one person can create a bridge to change through changing themselves - and begin to truly see and understand another person. In this world of blame - both personally and nationally - Mrs. LaSalle brings hope for reconcialation - the power of self-knowledge and of personal change. She has given us a great gift - the truth of her own experience and her deep courage.

Published by Thriftbooks.com User , 19 years ago
I bought this book at the recommendation of a good friend and read it straight through as soon as it arrived. I highly recommend this book for all parents of children with Asperger Syndrome. Parents of adult children with AS will likely recognize the frustration of no diagnosis, but it has something to offer parents of any age child. It is a very personal story that will touch the heart of all readers. I cried several times while reading this book. I cried for Ben, I cried for his mother, I cried for my own child and I cried for myself. We love our AS children. We want the very best for them and always to see them in a positive light, but the truth is that sometimes it's very hard. It was refreshing to read a book that touched on some of pain and reality that few are comfortable discussing. I don't want anyone to think that this book is a complete downer or that it portrays AS in a negative light. It's about a journey--one that every parent of a child with AS must take. Some of those journeys will be easier and some will be harder but in the end we all share common experiences and will relate to this story. I truly believe that some of what I learned while reading Finding Ben will make me a better parent to my own child. Thanks to the author.

Published by Thriftbooks.com User , 19 years ago
No one should think that they can return to a regular life after reading this book. Forget computers, TV'S, VCR's, DVD's. Skip nail filing, phones ringing, mail checking. Postone forever planning, talking, flossing. And don't bother cleaning your smeary eye glasses since you won't ever need to read anything else. You can only hold on to your heart because it is so filled after reading "Finding Ben." It's the opposite of a heart attack when everything goes wrong. The rightnesss of it moves little by little then moves bigger and bigger and bigger until your heart is so full that you have to let go of something so at first you can only let go of the water part that has movedinto your eyes and the extra shiny part that has moved into your soul. And you don't know - you cannot know about letting go of other parts until more time has elapsed since the last page. The power and the beauty of this extraordinary book reaches far, far beyond its Asperger's audience causing readers to understand what they've never understood before about what it means to be human.
Trustpilot
Copyright © 2022 Thriftbooks.com Terms of Use | Privacy Policy | Do Not Sell or Share My Personal Information | Accessibility Statement
ThriftBooks® and the ThriftBooks® logo are registered trademarks of Thrift Books Global, LLC