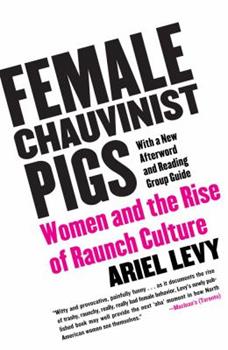 Female Chauvinist Pigs: Women and the Rise of Raunch Culture

A classic work on gender culture exploring how the women's movement has evolved to Girls Gone Wild in a new, self-imposed chauvinism. In the tradition of Susan Faludi's Backlash and Naomi Wolf's The Beauty Myth , New York Magazine writer Ariel Levy studies the effects of modern feminism on women today. Meet the Female Chauvinist Pig--the new brand of "empowered woman" who wears the Playboy bunny as a talisman, bares all for Girls Gone Wild, pursues...

Published by Heidi Lynn , 9 months ago
This book used such specific events and people it was difficult to relate it to current events. It was a let down.

The Empress Has No Clothes

Published by Thriftbooks.com User , 14 years ago
For years, as I have watched "raunch," as Ariel Levy rightly refers to it, go mainstream in American society, I have felt a sense of increasing discomfort and befuddlement, to say the least. In no small part, the befuddlement was born of watching my own gender betray itself, betray the cause of working towards women's rights in a male-dominated world. Yet I had no words for it. It was a gut feeling: this is wrong. This is nauseating. This is regression. Even - this is to the downfall of a woman's right and wish to explore her sexuality and seek its fulfillment. When I saw this book's title, I immediately sensed I'd found something of importance. The day the book arrived in my mail, I sat down and read it - all in one sitting. It's been a long time since I have done that, but my sense was correct. At long last, I'd found the expression of that inner voice, put to coherent and rational words, ordered into a call for action. With utmost gratitude, I say to Levy: thank you. What is a female chauvinist pig (FCP)? "If Male Chauvinist Pigs were men who regarded women as pieces of meat, we would outdo them and be Female Chaunvinst Pigs: women who make sex objects of other women and of ourselves." To Levy's credit, she readily admits, more than once, that she, too, wants to "belong," to "get with the program," to seek acceptance among others, as is human nature to do. She observes the mainstreaming of raunch, and women, including feminists, falling obediently into line in promoting it. "But I could never make the argument add up in my head," she writes. "How is resurrecting every stereotype of female sexuality that feminism endeavored to banish *good* for women? Why is laboring to look like Pamela Anderson empowering? And how is imitating a stripper or a porn star--a woman whose *job* is to imitate arousal in the first place--going to render us sexually liberated? 'Raunchy' and 'liberated' are not synonyms. It is worth asking ourselves if this bawdy world of boobs and gams we have resurrected reflects how far we've come, or how far we have left to go." As Levy describes our status quo, the trillion dollar industry of porn, the mainstreaming of porn into everyday prime time media, the popular style of dress among our youth, promiscuity not only among youth but also reflected in increasing incidences of infidelity (resulting in growing numbers of broken relationships) among older generations, the quixotic chase for everlasting youth in a narrowly defined mold of feminine beauty, and the general acceptance of objectifying women, it is difficult to see how this trend might be construed as a positive or liberating one. So why then would women become their own worst enemy? Somewhere along the developmental line of feminism and women's liberation, as we fought for equal rights and opportunities, we achieved much in some areas while falling to our knees, literally and metaphorically, in the area of female sexuality. It is the one area where we are, perhap

Published by Thriftbooks.com User , 15 years ago
This book is truly a turning point for all those sitting on the left and the right wondering why so much of modern culture in the west seeks to denigrate women, and most suprising it is the women who do the denigrating. Why are those who run Playboy and those who are deeply involved in the filming of 'girls gone wild' women? Why do so many smart women studying for Phd's just want to end up as strippers or take part in wet t-shirt contests as a badge of honor or 'right of passage'? Why are the smartest women also those who appear nude in at least one magazine and why did the U.S olympic team of women pose nude when their male counterparts never did? THis feinist writer dares to ask what happaned to feminism. Why is it that todays feminits speak poetically about the 'empowerment' of being a sex worker? Why is it that an independent women is synonimis only with being a stripper. What happaned to those old goals like equality and egalitarianism, why did womens lib turn into women being valued only as objects? This is the theme of this book, an eciting theme that shows that moral conservatives can agree with modern day feminists(not due to shared roots) but because the result of immorality and objectification has had the same result. Seth J. Frantzman

Someone dares question the status quo

Published by Thriftbooks.com User , 15 years ago
I love it when people lose their minds when someone comes out of nowhere and dares question the status quo. I also find critics' responses hilarious as, vast majority of the time, they completely miss the point (or concoct their own conclusions) and "Female Chauvinist Pigs" was no exception. Why is a book dealing with womens' issues always labeled "controversial" when it doesn't accept popular culture's perception of how women should look and feel? I'm proud that someone my own age has finally woken up and started throwing around some serious questions regarding how far women have regressed when it comes to true equality, liberation, and sexuality. I've long gotten tired of the argument that if women are "comfortable" with their sexuality they should do whatever they want. It's gotten old because being "comfortable" with your sexuality always runs along the lines of humping and dancing around a pole three-quarters or completely naked and being able to sleep with anyone and everyone without feeling the least bit shameful about it (I'm far from a prude but how about a bit of self-respect?). It's bad enough there's the perception that it's okay for males to act like that but for women to sink to their level isn't doing or saying much for us. Ariel's main argument was why women must act like men in order to be thought of as equals (when their salaries say something entirely different)? For all the talk from so-called "mother feminists," why is it in 2006 America women are still not paid the same as a man for the same work? There are splits and divisions in every movement in this country (especially amongst right-wingers that the American media conveniently overlook) and the womens' rights movement fell victim to that in its heyday and with the so-called "second wave" of feminism today. It's not bad enough we have the odds stacked against us because of our anatomy but it's quite another to have to fight against other women who are nothing more than pilot-fishes for the patriarchy (Ann Coulter and Camille Paglia to give just a few examples), who put down anything feminine as "girly-girl" (Coulter, when she was axed from The National Review because of her extreme stances called the editors - neo-fascists themselves - "girly-girls" meaning they had no backbone to run her vitriol) and any attributes such as strength, guts, and working your way to the top is always acting like a man. It was hilarious reading the criticisms of Levy's book as I don't think they read the same book I did. Levy never once stated that women who didn't fit into her "shallow worldview" are FCP's (Female Chaunvinist Pigs). Quite the contrary. And I'm wondering why if a woman is supposedly "comfortable" with her sexuality does she have to be an exhibitionist about it? Why is it women are the ones who have to grind against and swing around poles, the ones who need plastic surgery so everything right down to our privates look "perfect?" Why do we have to prove we'r

Not a Paris Hilton sex video

Published by Thriftbooks.com User , 16 years ago
Despite its shocking pink cover, complete with a suggestive raunch-culture graphic, this book is not Nicole Richie's memoir. Rather, it seeks to exam exactly what our pious-idealism preaching culture idolizes about sex and appearance, and where the feminist movement has lead women. Why have we have chosen to mimic the likes of Paris Hilton and Christina Aguilera, who say they helped women earn the power to "be like men" by stripping and posing, forsaking women's movement idols Susan B. Anthony and Elizabeth Katie Stanton, who merely gave us the vote. The idols of today are fleshy Barbie dolls whom we don't even have to take the time to dress up; The media does that for us, encouraging that each female celebrity's daily attire includes jeans that ride low, camisoles that ride up, streaked blond hair and barely-their waists, presenting us with a fantasy that poses nude for Playboy and video tapes herself having sex. And every bleached and botoxed woman walking down the street anthropomorphizes that fantasy until we come to expect it, even demanding it of our female youth culture. Finally, here is a scholarly book that allows for the facts to speak for themselves: Until heterosexual men are posing near nude in mainstream US magazines and making out with eachother on camera, we have no achieved true equality of the sexes. Who are the Female Chauvinist Pigs? Every daring, vibrant, would-be Stanton or Anthony who is out stripping her clothes, picking out breast-implants, and settling for second-best.