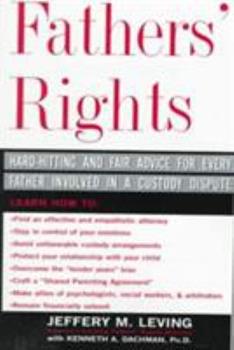 Fathers' Rights: Hard-Hitting and Fair Advice for Every Father Involved in a Custody Dispute

by Kenneth A. Dachman and Jeffery M. Leving

Millions of fathers are currently embroiled in the fight of their lives to win custody of their children. Wounded by the acrimony and greed that often accompany divorce proceedings, many wonder if they will ever again be an important part of their sons' and daughters' lives. With this landmark book, renowned men's rights attorney Jeffery M. Leving offers disenfranchised fathers true hope and meaningful advice certain to save years of anguish and possibly...

Published by Thriftbooks.com User , 19 years ago
First let me say that I have read dozens of books on Father's rights. As someone who has been involved in a long-term divorce and custody action, I felt it was imperative to educate myself "outside of the box". What I found was that while many self-help books offer good advice and content, none have done so within the context of the American legal system. No matter what is said about good intentions, it always comes down to legal issues in conjunction with behavioral and mental issues.This book is worth its weight in gold. Written by an attorney with vast experience in Father's rights cases, it is a no BS manual for determining your situation and finding a roadmap to its conclusion. Excellent informational content, well-written, and methodically walks the reader through the different phases, scenarios, and pitfalls of impending litigation, whether it be a simple way to craft a parenting agreement or all-out war.I whole-heartedly recommend this book as the single best resource you can find for Father's engaged in divorce and custody issues. Real-world advice that's on target. I have engaged four different attorneys in two states in a three year cross-state litigation case involving UCCJEA, and spent 30k in fees for worthless representation until I found my current attorney. If these professionals had the cumulative experience that was documented in this book, and had they been able to trasfer that information to me in its entirety, I could have saved myself a ton of problems.Do yourself a favor and buy this book.

Published by Thriftbooks.com User , 21 years ago
The author of the book, Jeffery Leving, is a well-known divorce lawyer in the Chicago-area, solely because of his commercials shown between Jenny Jones-esque talk shows. Because of the shady credibility that I associate with these lawyers, I wasn't sure what to expect from Leving's book. I can only really say one thing about this book - WOW! Not only is Leving a great writer, but I believe his advice will be truly valuable. (My husband will be fighting his ex-wife for custody in the coming months.) His advice includes what to look for when choosing a lawyer, ways to deal with the "ex", how to respond to interviews by court officials and "experts", and helping your child(ren) through the whole ordeal. I must have highlighted half of the book while reading it! Finally, although Leving makes note of the gender bias in the domestic court system, he does not focus on the issue. That is, where other books whine excessively about the bias problem, Father's Rights addresses gender bias in the courts but then moves on to bigger and more important issues. This is definitely a must-read for any father who sees a custody battle in his future.

The Anguish of Modern Fatherhood

Published by Thriftbooks.com User , 22 years ago
Although I cannot speak for all non-custodial parents (Typically fathers), I can say that when I discovered this book during the winter of 1998, I felt that the author was almost speaking directly to me. Mr. Leving uderstands that our courts and our court-appointed visitation and custody mediators are profoundly gender biased. Prior to reading Fathers's Rights (How very few there are!), I had attended father-support groups for three years, and I had heard some real horror stories, especially concerning problems with denial of visitation. Mr. Leving acknowledges the fact that most mothers do not consider the fathers' visitation right as important-they view these rights as gifts or privileges for them to bestow at their wim. For the many fathers who have had to fight with the tenacity of a pit bull, this book speaks to them. It is further intersting to note that while our society continually decries the absence of fathers, it fails to acknowledge just how difficult it is for fathers to be granted even a modicum of visitation rights, and how equally apathetic judges are when it comes to enforcing them. Indeed, a father who stands on his rights stands on quicksand. It is my belief that if the mothers do not want the fathers in the childrens lives, than the mothers should not have chldren with the fathers. Instead, most mothers enforce the double standard. Unfortunately, Mr. Leving has no advice for the fathers who are poor and must represent themselves as Pro Se litigents. My answer was to go to the local law library and photocopy the statutes on Visitation and Child Support. I then read How To Reprensent Yourself In Court, published by Nolo Press. The modern father needs to become involved with Father Support Groups, and learn all he can about the few legal rights he has. Reading the statutes on visitation is not all that complex. It is also helpful when you do need an attorney that you know the rules of the game. Mr. Leving's book was, for me, a great place to start.

TOO BAD THAT THE LAW FIRM DOESN'T PRACTICE WHAT THEY PREACH

Published by Thriftbooks.com User , 22 years ago
I AM NOT 12 YEARS OLD. THE BOOK WAS WONDERFUL. AFTER READING THE BOOK, I RECOMMENDED THE LAW FIRM OF JEFFREY LEVING TO MY SON. HIS FIRST ATTORNEY BILLED HIM $9000 IN FEB 2000. HE NEVER GOT TO EVEN SEE HIS SON FOR OVER 2 MONTHS. HIS SON WAS ONLY 8 MONTHS OLD AT THE TIME. WHEN MY SON HAD HIS COURT APPEARANCES HIS FIRST ATTORNEY FROM THE FIRM NEVER EVEN SHOWED UP. IT WAS NOT UNTIL HE SAW HIS WIFE THERE, THAT HE REALIZED THAT THEY WERE DISCUSSING HIS CASE. ABOUT A MONTH LATER HIS FIRST ATTORNEY FROM THE JEFFREY LEVING LAW FIRM SUDDENLY LEFT THE FIRM. NO EXPLANATION. MY SON THEN STARTED WORKING WITH A NEW ATTORNEY FROM THE FIRM AND PAID ANOTHER $8000. HE FINALLY GOT TO HAVE HIS SON FOR 4 HRS 2 TIMES PER WEEK IN MAY, BUT ONLY BECAUSE OF MEDIATION WITH A THIRD PARTY. MY SON IS A FINE UPSTANDING CITIZEN, HE IS NOT A CRIMINAL, AND HAS NO PSYCHIATRIC HISTORY. IT IS NOW SEPTEMBER. HIS ATTORNEY CALLED HIM LAST EVENING TO REMIND HIM THAT HE WOULD SEE HIM IN COURT. AGAIN, WHEN HE GOT TO THE COURTROOM, A DIFFERENT ATTORNEY FROM THE FIRM WAS THERE, NOT HIS LAWYER HE HAD BEEN DEALING WITH. THE STAND IN ATTORNEY DID NOT INTRODUCE HIMSELF, GIVE HIM A BUSINESS CARD, OR SHAKE HIS HAND. AGAIN, HE REALIZED HE HAD A STAND IN BECAUSE HE SAW HIS WIFE'S ATTORNEY GO BEFORE THE JUDGE. THE JUDGE AWARDED HIS WIFE 40%(WHAT WAS REQUESTED BY HIS WIFE'S ATTORNEY} OF HIS TAKE HOME PAY. NO INCREASE IN VISITATION. AFTER THE RULING, MY SON TOLD THE STAND IN "THAT IS 40% OF MY TAKE HOME PAY" THE STAND IN ATTORNEY FOR THE JEFFREY LEVING FIRM TOLD HIM "TOO BAD YOU WORK FOR YOUR MOTHER, THE NUMBERS CAN BE MANIPULATED TOO EASILY" "YOU ALSO HAVE TO PAY YOUR WIFE'S ATTORNEY $5000 BY THE END OF THE MONTH OR OUR FIRM CAN NO LONGER REPRESENT YOU." I THINK THE FIRM RIDES ON THE NAME AND REPUTATION OF JEFFREY LEVING. I STILL ENDORSE THE BOOK HIGHLY, BUT IN NO WAY WOULD I EVER RECOMMEND SENDING ANY LOVED ONE TO THE FIRM.

A Survival Guide for All Father's

Published by Thriftbooks.com User , 24 years ago
The fight to preserve a place in your children's lives can be one of the most psychologically, emotionally, and financially challenging experiences any male may face in a lifetime; however, there is a survival guide - Father's Rights by Jeffery Leving, et al. I recently faced a tremendous challenge to my parental rights in Texas and found this to be my sole guide. It walked me through some of the rougher realities of my fight and eventual court hearing. The advice is very practical and the insight of how the system works is invaluable. The case studies illuminated what can go wrong and let the reader prepare accordingly if necessary. I would absolutely agree in repeating to other fathers that if you're going through a divorce with children, having trouble with a vindictive ex-wife even after the divorce is over, or in a fight to preserve your fatherhood, then don't miss this resource - your children may depend on it. The bottom line - If you find yourself in this position, then this book must be at your side and at your attorney's side. Thanks to J. Leving
Trustpilot
Copyright © 2022 Thriftbooks.com Terms of Use | Privacy Policy | Do Not Sell My Personal Information | Cookie Preferences | Accessibility Statement
ThriftBooks® and the ThriftBooks® logo are registered trademarks of Thrift Books Global, LLC