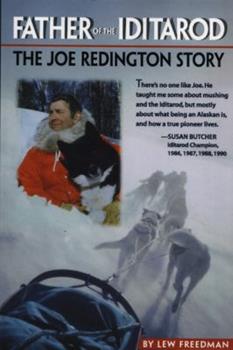 Father of the Iditarod: The Joe Redington story

This description may be from another edition of this product. Meet rugged, independent, determined, and hard-working Joe Redington, Father of the Iditarod, a man who found his destiny in Alaska. In an inspirational biography, Lew Freedman chronicles Redington's...

Published by Thriftbooks.com User , 17 years ago
Joe Redington, Sr., may not have been an Alaskan by birth, but any resident of the state would agree that he was, and remains, a symbol of the Alaskan spirit. Born and raised in Oklahoma, Redington always had a fascination with the rugged far-north, and read every book on Alaska he could get his hands on. In 1948, at the age of 31, he finally made the decision to pack up his family and move there. They homesteaded in Knik, off the Parks Highway, on the northwestern side of Knik Arm, and that's how Redington got involved with sled dogs. Mushing was an effective way to get from place to place, and Knik Kennels was born. By chance, the property opened directly onto the historic Iditarod trail, which by that time was in poor shape owing to disuse. Redington cleared a section of the trail for his own use, and soon became caught up in the route's historical significance. The famed 1925 "Serum Run" had followed that trail when there was no other means of rushing life-saving medication to diptheria-stricken Nome.Redington decided it was high time the trail be restored and brought back into regular use, proposing a 1,000-mile dogsled race from Anchorage to Nome. Everyone thought he was nuts. But the first Iditarod Trail Sled Dog Race was held in March of 1973, on a shoestring budget, but a resounding success nonetheless. The first few years of the race's existence were rocky at best, but this was Redington's baby, and he nursed it along with unwaivering confidence and energy. Today it is an internationally famous sporting event, with mushers arriving each spring from all over the globe to compete. Though Redington himself never won the race (he participated in it almost every year), not having time enough left to properly train his dogs after all the effort he expended in organization of the event, he did help many eventual Iditarod champions get their footing. Two such notable figures are five-time winner Rick Swenson and four-time winner Susan Butcher. In addition, Redington, along with Susan Butcher and Ray Genet, brought the first dog team to the peak of Mount McKinley in 1979. In 1993 he organized the first Iditarod Challenge, an opportunity to follow the trail for fun rather than competition, with Redington as guide. He also participated in a special dogsledding trial at the 1994 Olympics in Norway.The title "Father of the Iditarod" has been applied to Joe Redington for years, and he has engraven himself upon the hearts of all Alaskans. I grew up in Anchorage and he was always a household name. He was an amazing man. Redington had unquenchable enthusiasm for everything he did, and never let age slow him down. He ran his last Iditarod in 1997, at the age of 80. When he was diagnosed with cancer of the esophagus in 1998, he fought it with the same determination and confidence that he had exhibited when fighting for the creation of the Iditarod, and he beat it. He even got back to mushing, though he would not compete again, and eventually the cancer re

Published by Thriftbooks.com User , 20 years ago
I was so pleased with this book that I felt compelled to encourage more people to read it. It offers the history of the Iditarod Sled Dog Race which is interesting enough, but more than that, it is the story of one man who gave everything he had to Alaska and dog mushers everywhere. If you are looking for an inspirational read, this is it!

Father of the Iditarod: The Joe Redington story.

Published by Thriftbooks.com User , 21 years ago
As I read through this account of the roots of "The great race" I was all the while planning my next trip to Alaska. To be included in this was an attempt to me "The Man" so convinced was I that Joe would not only pull through his illness he would live for ever. I am now sure Joe will live for ever, not only in the hearts of the Dog sledding fraternity but amongst all who possess a sense of adventure. Read this book and live the greatest adventure race on this planet.

Father of the Iditarod

Published by Thriftbooks.com User , 21 years ago
This book was an intense view into the life and times of the creator of the Iditarod. It takes you back years into the past for a view of what it was like to live in a time when living in the wilderness was rough and tough. This book helps to preserve the memories of days old and commemorate the legend who devoted his life to his dream of "The Last Great Race" - "The Iditarod Sled Dog Race"

There still are pioneers out there

Published by Thriftbooks.com User , 21 years ago
Just when you thought that the age of explorers was dying down, along came Joe Redington, the founder of the Iditarod dogsled race. This book tells about the efforts he put forth to create a sporting event that continues to this day. You'll also learn about his life growing up and the many other adventures he had. I was surprised that one person could achieve so much in one lifetime. The author interviewed Joe and many of his friends to give the reader the feeling that if you didn't know Joe, you wished you had. Never a dull moment in this man's life.
Copyright © 2020 Thriftbooks.com Terms of Use | Privacy Policy | Do Not Sell My Personal Information | Accessibility Statement
ThriftBooks® and the ThriftBooks® logo are registered trademarks of Thrift Books Global, LLC