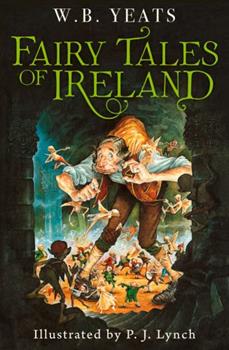 A magical collection of classic fairy tales by one of Ireland's greatest writers, with mesmerising illustrations throughout by P. J. Lynch bringing the characters vividly to life. A selection of nineteen myths and legends, carefully selected and curated from the author's book, Folk and Fairy Tales of Ireland. These classic stories are enchanting portrayals of people from the Otherworld - tales of witches, fairies, giants, pixies and hobgoblins. Told...

Published by Thriftbooks.com User , 12 years ago
William Butler Yeats collects Irish fairy and folk tales in this volume. It is a pretty wide selection which covers topics such as fairies, leprechauns, merrows, puccas, ghosts, witches, giants, and more. You won't get an in depth introduction to each type of creature, but you will get a few story selections for each type of creature. This book doesn't have much commentary on the different types of creatures. It primarily focuses on folk stories concerning them. I recommend this book for anyone who hasn't had an introduction into the world of Irish folklore. I think you find it interesting.

Window to a Time Past

Published by Thriftbooks.com User , 14 years ago
This is a reprint of the original volume published by W.B. Yeats in 1892. There have been several other versions, under different titles, notably one published by Barnes & Noble, and another from Modern Library with a forward by Paul Muldoon. Both of the latter go under the title "Irish Fairy and Folk Tales." All three are collected and edited by William Butler Yeats, arguably the greatest poet the island ever produced. They are essentially the same collection, with the exception that the B & N version also contains an account of the Fate of the Children of Lir, together with beautiful engravings illustrating the entire volume. Both Yeats and Lady Gregory were especially concerned that the best of the tales from the Irish countryside be preserved before their main purveyors, the Shenaches (storytellers) vanished. Those collected here are a varied lot, and not all of them will appeal to every reader. That, however, does not affect their value at all, for here a way of life is preserved and we can look through a small window into the beliefs and habits of the Irish people in the days when the "Fairy Faith" was still common amongst them. It is probably best not to read the collection straight through, but rather peruse it, selecting from it that which most appeals. Yeats's singular contribution is the dividing the denizens of the Irish Enchanted Countryside into categories: The Trooping Fairy, The Solitary Fairy, the Sociable Fairy, etc, together with Ghosts, Witches, Giants and the like. Within each "type" there are essays, songs, poems, hearsay, histories ... in short, something to appeal to every taste, as long as that taste has a goodly sampling of fancy about it. These fairies are not the gossamer winged, luminous beings of Victorian paintings. These fairies are as likely to curse as to bless and it does not benefit the unwary or skeptical to offend them. Here are pookas, leprechauns, far darrig, Ban-Shees, and lanawn-shees. These creatures were ever present to the Irish peasantry, and were forgotten with the industrialization of modern times. Fortunately, thanks to the efforts of Yeats and others like him, much of this world was preserved for us. Some of the stories and poems retain their Irish intonation and syntax and may be difficult for some to follow, but patience will be rewarded; One can almost "hear" the storyteller and the bard. This is a volume well worth going back to again and again.

Published by Thriftbooks.com User , 15 years ago
This absolutely charming collection of stories truly represents the best of "fairy" tales in which the fairy folk feature prominantly as well as a number of other folk beasties. WB Yeats has managed to capture all of the humor, fright, and love involved in the fairy world and it is a joy to follow him around in a world he seems to know so well.

Published by Thriftbooks.com User , 22 years ago
Well, I read a different edition, but I'm sure they contain essentially the same stories. The collection contains many traditional folk stories and several poems from Ireland. The stories are entertaining, and some contain folk wisdom in their morals. Many are told in dialect, with some Irish words left intact. The similarities between these tales and folk tales around the world is striking, though of course characters such as the banshee and leprachaun are distinctly Irish. There is a strong Christian influence in these stories, which makes an interesting blend with the older Druidic elements. I found them entertaining, and they definately are distinctly Irish. Anyone interested in traditional Irish culture, or fairy tales in general will enjoy these stories.

Published by Thriftbooks.com User , 24 years ago
This is an excellent collection. All sorts of creatures and strange happenings are described, and a good number of the stories are told in the dialect of the person who the story was gotten from (Yeats & his friends traveled around Ireland collecting stories from the people they met - recording the oral traditions, if you will.)
Copyright © 2020 Thriftbooks.com Terms of Use | Privacy Policy | Do Not Sell My Personal Information | Accessibility Statement
ThriftBooks® and the ThriftBooks® logo are registered trademarks of Thrift Books Global, LLC