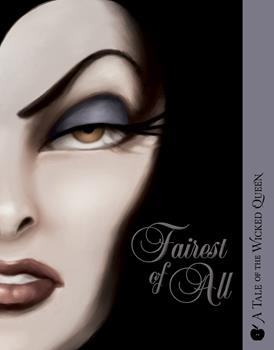 Fairest of All: A Tale of the Wicked Queen

(Book #1 in the Villains Series)

For anyone who's seen Walt Disney's Snow White, you'll know that the Wicked Queen is one evil woman After all, it's not everyone who wants to cut out their teenage step-daughter's heart and have it delivered back in a locked keepsake box. (And even if this sort of thing is a common urge, we don't know many people who have acted upon it.) Now, for the first time, we'll examine the life of the Wicked Queen and find out just what it is that makes her...

Published by Kai , 5 months ago
So happy I ordered these books. I'm very happy with everything. The book is a page turner.

A Descent into Madness.

Published by Liberty. , 2 years ago
I cannot do this book the justice it deserves. Once you start it you won't be able to put it down. The only thing I didn't like was that the queen's real name is never spoken or mentioned not even once. Other than that, I have no complaints.

Published by Mbrewer95 , 2 years ago
This Book is very good! Once I started reading it I couldnt stop. Took me 2 days to read the whole book. Absolutely loved it!

Magic Mirror on the wall, which is the greatest book of all? THIS ONE!

Published by Thriftbooks.com User , 11 years ago
As the title of this post suggests, I am VERY satisfied with this book. :) I picked it up at my local Barnes and Noble bookstore and I finished it in two days. It is a beautiful testament to the classic story of Snow White with a great twist, giving readers a glimpse into the world of the Wicked Queen: her trials, her sorrows, and the events that ultimately led to her become the vile witch we all know her to be. The book is very well written, its details creating visual images for the reader. As the above age recommendation says, the book, while written as an adaptation of Disney's Snow White, is for 9-12 to adults so those under 9 may not enjoy this one as much but for those in need of a good novel or for the dye-hard Snow White/Disney fans who've always wanted to know more about the first Disney Villain, this is the book for you.

The Evil Queen's Side Of The Story

Published by Thriftbooks.com User , 11 years ago
Very similar to Gregory Maguire's series of fairytale books (Wicked, Confessions of an Ugly Step Sister, etc) we learn what made made the Evil Queen evil. Additions of a few characters flesh out the book to approximately 250 pages. And portions of the Disney film, Snow White, pop up and help it all fit together. It's was an enjoyable read though a few scenes may make it a little too scary or unsuitable for younger kids. I finished the book in a few hours while waiting in the airport so it is not a lengthy novel.

Published by Thriftbooks.com User , 12 years ago
I have read plenty of this author's work, although not all. This was an enjoyable, albeit sad, read. I am thrilled that Ms. Valentino did not alter the characters but instead built them up, polished and shined if you will. I have to completely disagree with the ill review given by MK of Wisconsin. Regardless, I believe that the story of Snow White and the Seven Dwarfs is greatly enriched by this tale of the Wicked Queen. The story begins with all the makings of a beautiful fairy tale, developing the pre-wicked queen and the previously unknown King. A tale that should have ended happily. Valentino gives nothing away at the end of each chapter, making you wonder what will happen next. The first half of the book is happy, even though you know the story ends badly you do not know when or what to expect as to why the queen turned evil. I believe that the extremity to which some concepts were taken would not be suitable for the younger readers (younger than 12); However, I believe these concepts to be food for thought outside the application of the story. Suitable for teens and adults alike. The twist at the end was a bit unexpected and opens possibilities for further projects. Shedding new light on the entirety of the Fairy tale was this book's forte. I was additionally pleased at the mention of other famous tales, though not named, within the tale. All in All a great read for a rainy day, or whenever. I also suggest looking into some of Valentino's other works, such as Gloomcookie and Nightmares and Fairytales. I also hear that she is working on a Young Zombie's handbook, for the newly zombified individuals.

Published by Thriftbooks.com User , 12 years ago
I have to disagree with the woman who disliked this novel. This book was written very well, I found it to be very descriptive and I thought the characters were engaging. I was a bit confused when the other reviewer said that the passage of time was "poorly indicated" - the author clearly indicates how much time had passed from scene to scene and chapter to chapter. I felt this book, even though sad, was beautiful, and it took me into the mind of an otherwise undeveloped character (from what we knew of her from the films) and brought her to life in a way I found surprising and more heartbreaking than I imagined. Other than the queen, I especially enjoyed what the author did with the man in the mirror and the creation of the strange sisters. I felt the queen's father and the spells of the sisters had a tremendous influence over the queen, and again found the other reviewer confusing when she stated she felt she might have liked it more if the queen was influenced by them. I do feel the author touched on some important themes in this book, such as the many ways people deal with loss and grief, and how important it is not isolate yourself from those you love when grieving. I would highly recommend this book to teens as well as adults. I look forward to reading this author's future works.

Published by Thriftbooks.com User , 12 years ago
A wonderful story about how the wicked queen from Snow White and the Seven Dwarfs became so wicked. I like to casually browse the Young Adult section at Borders and B & N and I'm very influenced by cover art. Reading the inside flap, I only needed one sentence to sway me. I bought it immediately and started reading once I got home. I have to say that the author caught the Disney version of the characters perfectly and I believe that's the way it should be. The writing was well written and it moved quickly for me. The end of each chapter made me want to know what would happen next and it provided great imagery for my imagination. I watched the classic Snow White right away with the thought of the Queen's life and it changed the whole movie for me-in a good way! It even has a nice twist at the end. I definitely recommend this to anyone who appreciates an alternate view on a classic.
Copyright © 2020 Thriftbooks.com Terms of Use | Privacy Policy | Do Not Sell My Personal Information | Accessibility Statement
ThriftBooks® and the ThriftBooks® logo are registered trademarks of Thrift Books Global, LLC