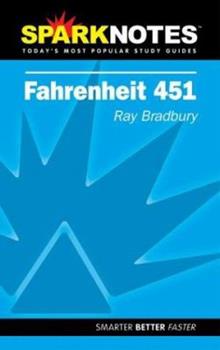 by SparkNotes and Ray Bradbury

This description may be from another edition of this product. When an essay is due and dreaded exams loom, this book offers students what they need to succeed. It provides chapter-by-chapter analysis, explanations of key themes, motifs and symbols, a review...

Bradbury's classic parable on the evils of censorship

Published by Thriftbooks.com User , 18 years ago
I am teaching "Fahrenheit 451" as the example of a dsytopian novel in my Science Fiction class, although it is certainly one of the most atypical of that particular type of narrative discourse. Compared to such heavy weight examples as George Orwell's "1984," Aldous Huxley's "Brave New World," Yevgeny Zamiatin's "We," Ray Bradbury's imaginative meditation on censorship seems like light reading. But the delicious irony of a world in which firemen start fires remains postent and the idea of people memorizing books so they will be preserved for future generations is compelling. Of course, there have been more documented cases of "book burning," albeit in less literal forms, since "Fahrenheit 451" was first published in 1953, so an argument can be made that while all the public debate was over how close we were the Orwellian future envisioned in "1984," it is Bradbury's little parable that may well be more realistic (especially in terms of the effects of television).The novel is based on a short story, "The Fireman," that Bradbury published in "Galaxy Science Fiction" in 1951 and then expanded into "Fahrenheit 451" two years later. However, those who have studied Bradbury's writings caw trace key elements back to a 1948 story "Pillar of Fire" and the "Usher II" story from his 1950 work "The Martian Chronicles." Beyond that, there is the historical record of the Nazis burning books in 1933. The story is of a future world in which everyone understands that books are for burning, along with the houses in which they were hidden. Guy Montage is a fireman who has been happy in his work for ten years, but suddenly finds himself asking questions when he meets a teenage girl and an old professor. "Fahrenheit 451" is not only about censorship, but also about the inherent tension in advanced societies between knowledge and ignorance. Reading this novel again I am reminded about Pat Paulsen's editorial on the old "Smothers Brothers Comedy Hour" (a series well acquainted with the perils of censorship) about how we might enjoy freedom of speech in this country but we do not enjoy freedom of hearing because "there is always the danger of something being said." Censorship, in practical terms, is the effort of those who do not want others to hear what they find offensive, for whatever reasons, basically because it leads to people thinking thoughts they do not want them to be thinking. Through the rambling diatribes of Captain Beatty, Bradbury makes this point quite clear to his readers.Even though this is essentially a novella, Bradbury's work retains the charm of a short story. The recurring use of animal imagery throughout the story, the use of the mythic ideas of the salamander and the phoenix, make "Fahrenheit 451" more poetic than any other dystopian work. Even if it is predominantly a one note argument regarding censorship, it is impossible to deny that Bradbury makes a clear and convincing case for his position. Besides, there is something to be

Published by Thriftbooks.com User , 18 years ago
"Fahrenheit 451" is a simply great book. Yes, it's quite distressing and unpleasant to read - because what Bradbury describes is much closer to truth than we'd like it to be. And that is precisely what makes the reality of the book so alike our own - it's more pleasant not to think about such things, and therefore one can merely say the book doesn't suit one's taste and go 'get entertained' in front of the TV.The disturbing thing about the book is that, unlike many other books that deal with the distant future, "Fahrenheit 451" (written in 1953) hasn't been proved wrong simply by time itself. Not at all. Actually, what is shocking to realize is that we've come quite close to the society Bradbury writes about. Perhaps books haven't been banned yet, but it is indeed the entertainment industry that controls people's minds, the political correctness has reached ridiculous levels, there are ads everywhere and now we even have Segways so that we don't have to walk anywhere... And, of course, we can get a thousand page long classics shortened to a hundred pages - or, better yet, simply watch the movie.The book also has other qualities besides making one think (which is, judging by some other reviews, one of its biggest downsides). One cannot but admire the brilliant way Bradbury uses absurd and creates a completely surreal feeling by using the methods of expressionism to describe the feelings and thoughts of the main character. Bradbury sure had things to write about - and that can be proved by even something as simple as the fact I've spent the last half an hour writing a review on the Internet rather than reading a good book or looking at the world...

A message that grows more important every day

Published by Thriftbooks.com User , 18 years ago
It was a pleasure to burn. So begins, with this absolutely perfect opening line, Ray Bradbury's celebrated exposition of the dangers of censorship. Everybody knows that Fahrenheit 451 is a novel about book-burning, but this story goes much deeper than those not having read it may suspect. Its message truly does become even more germane and prophetic with every passing day. The skeleton of the plot is rather basic, really. Guy Montag is a fireman whose job it is to burn books and the houses in which these dangerous manifestations of inane scribbling reside - usually hidden. No one even remembers a time when firemen actually put out fires. We join Guy's life as he enters into a cusp of uncertainty. He has dared to pilfer a book here and there and stash them in his house, a most dangerous crime indeed. He soon meets a free-spirited teenager who breathes life into his state of uncertainty and opens his mind to brand new thoughts and possibilities. When she makes him admit that he is not happy, his life is changed forever. He can't take the lack of substance all around him, the wife who thinks of nothing but "the family" (a type of interactive programming that dominates the living room), the impending war which everyone essentially ignores. He knows there must be something else in life, and he comes to believe that the enlightenment he is after must surely be contained in books. Montag's conversations with his Fire Chief on this subject are quite astounding and revealing, and between this and Montag's friendship with an old former professor, we learn how Montag's world came to be this way. The government did not simply ban books overnight. Censorship started slowly and at low levels. Some minority group complained about this - deleted; another group complained about that - gone; these fellows over here object to so-and-so - zip. So many little pieces of books were removed that, over time, the very essence of books was destroyed. While the government has now come to insist that reading books is a crime, the horrible truth of the matter is that the society itself, in its fractious ways, is the party responsible for this tragic state of affairs. Can there be a more timely topic for our own time? We continually see history books being rewritten, "objectionable" words, phrases, and (horror of horrors) ideas removed from novels and poems so that no one can possibly be offended by anything under the sun. Censorship is a cancer on society, and the world needs visionaries such as Ray Bradbury to forcefully draw attention to the cold hard facts that a majority of the population seems to ignore or fails to acknowledge. Once the true meaning has been chopped out of the books lining our shelves, it will be too late to reverse the momentum without the aid of some kind of miracle. Fahrenheit 451's message is one that all people should be exposed to, and this novel is such a quick (but powerful) read that everyone really should read it. As hor

Published by Thriftbooks.com User , 21 years ago
When I began teaching three years ago, I was required to teach this book. Having never read it before, I began reading it just before our winter break. As I soaked up the story of the book, I realized my students were already living it. They begged me daily, "Ms. Hill, why do we have to read this stupid book? Can't we just watch the movie?" As I got deeper and deeper into the book, I grew increasingly depressed about the future of the world. Then I realized: Bradbury has given me a picture of what might be, if we are not careful. His book written nearly fifty years ago peers just twenty minutes into the future now. Technological developments he had no name for then are very real today. For example, his seashell radio is clearly the walkman many of us see pressed in the ears of teenagers daily. TV screens are growing larger and larger and flat screens with HDTV are on the market now. The next step is clearly the full wall television of Mildred's parlor. Robot dogs like Aibo are just a hop skip and a jump away from the dreaded hound. But this is a future preventable. Maybe. But if popular culture is constantly valued above thoughtful consideration and education, we'll march right into a land of burning books and intellectualism on the run. Bradbury's book made me feel defiant. They could never take my books from me. They could burn me with them if they want, but that's what it'll take before I give up my freedom to think for myself. And as for my students, they remind me every day what an uphill battle I have been sent to fight.

Published by Thriftbooks.com User , 21 years ago
This book is absolutely amazing. It describes a time in the future where censorship prevails and minds are caged. Nobody has original thoughts; with the abolishing of books creativity was lost as well. Guy Montag, the protagonist, is a fireman (firemen burn books in this story) who has to fight to pull himself from the grip of an overpowering government and tradition, only to see that it is all useless (why teach to people who can't understand?). The novel shows what censorship can do to a society, and why individuals must not accept the norm without questioning its integrity and implications. Overall, read this book immediately and apply what you learn from it into everyday life.By the way, ignore all of the reviewers that gave the book a low score because they could not understand the plot and symbolism. Their comments are similar to saying Shakespeare's works are poorly written because he uses odd vocabulary and the plot is too complex. Unfortunately, these people make of the mass of society, which is why these reviews are commonplace. (The funny thing is, the novel specifically targets these kind of people...)
Copyright © 2020 Thriftbooks.com Terms of Use | Privacy Policy | Do Not Sell My Personal Information | Accessibility Statement
ThriftBooks® and the ThriftBooks® logo are registered trademarks of Thrift Books Global, LLC