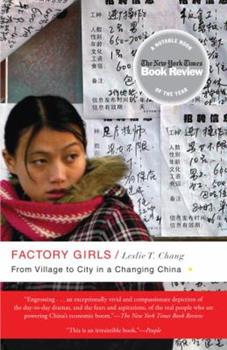 Factory Girls: From Village to City in a Changing China

An eye-opening and previously untold story, Factory Girls is the first look into the everyday lives of the migrant factory population in China. China has 130 million migrant workers--the largest migration in human history. In Factory Girls, Leslie T. Chang, a former correspondent for the Wall Street Journal in Beijing, tells the story of these workers primarily through the lives of two young women, whom she follows over the course of three years as...

Have You Ever Wondered About the Life of Those That Make Your Electronics?

Published by Thriftbooks.com User , 14 years ago
If you are anything like me, you have wondered about the lives and work conditions of the workers in China that manufacture the good we buy and use on a daily basis. In addition, I wonder if they know what they are making and have any desire to own these things. If these questions, and more, make you curious, then this is the perfect book for you to read. The author looks at the lives of the (mainly) women who leave the country side to come to the factories to make money for themselves and for their families. Focusing on the city of Dongguan, which is known as a manufacturing city, the author looked for and found 2 subjects that were interested in telling their stories. She actually found more, but do to the turnover rates at the factories, she lost touch with them fairly rapidly. Imagine, if you can, a factory that makes most of the athletic shoes for many of the main brand names in the industry, along with a few lesser brands. What would that factory look like and how are the workers treated? Would you be surprised if I told you the factory compound employs 70,000 employees (no, that isn't a misprint) and that the workers work forced overtime, make less than $200 a month (on average) and live and eat within the factory compound? I know I was amazed and tried to picture what a factory of that size looked like. Interspersed with the information about the factories, the city, and life in the city, the author presents a history of her family. While it may seem out of place, the information is very useful in demonstrating how China has changed financially, as well as socially, over the past 100 years. The information paints a stark change in the way society functions and demonstrates that China is a different country now from what it was even a mere 10 years ago. This was an excellent read that had me looking at electronic items I used every day in a totally different light. And, I am sure it will cause me to think twice when I next purchase something made in China. I will wonder if the people who made it are treated as slaves or if this factory is one of the better ones. And I will wonder if they aspire to own whatever it is I want (and probably don't really need). This is an excellent book that puts a face on the globalization of industry and I cannot recommend it highly enough!

What Up in China

Published by Thriftbooks.com User , 14 years ago
In this book, Leslie Chang delves deeply into the world of migrant workers to find out who these people are and what their collective dislocation means for China. Chang skillfully sketches migrants as individuals with their own small victories and bitter tragedies, and she captures the surprising dynamics of this enormous but ill-understood subculture. In many ways, migrant workers embody the fundamental changes underway in China today. Chang covered China for the Wall Street Journal, and she's an insightful interpreter of a society in flux. People who leave village life, with its intense cocoon of family and community ties, find themselves untethered in a city, scrounging for work and a place to sleep. "They were prey to all sorts of cons, making life decisions on the barest bits of information," she writes. And yet many migrants also feel freed from a suffocating web of traditional habits and mores. Able to explore and grow in the lawless free-for-all of China's boomtowns, many cross an invisible line into the modern world, and there is no going back. Chang got to know dozens of young women who have ventured to Dongguan, a new metropolis just north of Hong Kong. She focuses on two particularly compelling ones, Min and Chunming, who gradually came to trust her enough to share their stories, as well as diary entries, late-night phone calls and heart-to-heart confessions. Each is ambitious, impulsive, endearing. Each left home as a teenager and experienced a big adventure. Through their lives, Chang shows us how unmoored China is, erratically yearning for something better, and surprisingly resilient. One of the women describes her blurry, confusing arrival in a new city, getting lured into a whorehouse, escaping, begging on the street, stealing another woman's ID card to get work at a toy factory, graduating to clerkdom, learning about business, striking it rich with direct sales only to see her company crumble overnight. Chang explores a "talent market," where workers offer themselves to any prospective employer -- a sneaker factory, a dating agency, an illicit nightspot. She reads magazines about migrant life that the women eagerly pass around, with articles titled "Be Your Own Master" and "Ambition Made Me Who I Am." Interactions among migrant women seem a cross between high school networking and wartime bonding. Being far from home, the women depend on each other to survive, yet they unite and separate with remarkable ease. Everyone lies. Promises are made and broken. "Dongguan was a place without memory," Chang writes. Partway through "Factory Girls," Chang abruptly changes gears to tell her own family history. It is fascinating. Her great-grandfather was a landowner in northern China and a Confucian patriarch with four wives. His son, Chang's grandfather, studied mining in the United States and then returned to China. At the height of China's civil war, working for the Nationalists, he was assassinated. Chang's grandmother escaped to Tai

Published by Thriftbooks.com User , 14 years ago
China has 130 million migrant workers, 70% female; Chang tells their story primarily through the lies of two young women over a three year period as they attempt to rise from the assembly lines. Most leave home for these jobs for the money, to see the world, to have something to do, and learn new skills. Parents, however, are usually unhappy with this decision as it frequently leads to marrying someone outside the village and very few visits home. Ten are interviewed for every one hired, many have college diplomas. Typically girls sleep 12 to an unheated room at a factory site. Fines for sharing a bunk with a down and out friend (ten yuan, about $1.25), missing work (100 yuan) and various other infraction are deducted from their pay. Workers are usually required to stay 6 months, and the factory holds the first two months of pay as leverage to enforce this. Work days in some factories last 13 hours and go on every day for weeks, with some Saturday afternoons off. All this for 400 yuan/month (plus room and board), and almost as much again in overtime. Min (one of the girls followed by Chang) managed to leave the factory for a clerk position because of her neat handwriting. Her pay doubled, only 8/room, and ten hours/day. She planned to stay 7 years, sending money home to repay her parents for raising her; after that Min intended to return home and marry. (Min eventually obtained a position as a purchasing agent for 1,200 yuan/month, plus about 8,000 yuan/month in kickbacks. This not only enormously raised her standard of living, but her status at home as well.) Dongguan (estimated 10 million people) is divided into 32 towns, each specializing in a specific manufacture. American and European bosses rate best, then Japanese, Korean, Hong Kong, Taiwanese. Chinese bosses are rated the worst - always going bankrupt. Seventy-thousand work at the Taiwanese-owned Yue Huen shoe factory in Dungguan. It is the largest source for Nike, Adidas, Reebok, Puma, and others. Turnover is 5%/month, theft is rampant. (Dishonesty is common in all dimensions - purchasing kickbacks, official corruption, lying about marital status, product quality, corporations failing to pay employees.) Chunming (the other girl) became a direct salesperson for a foreign health products firm, making $1,000/month; 2.5 years later, however, she was working for a Chinese company and only earning $150/month - a considerable downfall (not explained), though still much better than if she had stayed in her home village or original factory job. Job-hopping and lying about one's past appear to be the best way to get ahead. Counterfeit vocational college degrees are available for $7.50. Karaoke companions earn about $25/night; prostitutes about $2,500/month. Chang also describes how the locals strive to learn English - enormously hampered by their instructors' lack of expertise - almost all Chinese, and many Ugandans. It was also interesting to read about Chang's visit t

Published by Thriftbooks.com User , 14 years ago
Interesting subject, thorough research, well-written. Even the digressions (about the author's family and their histories in and out of China) are fascinating, though they don't quite mesh with the rest of the book. The experiences the factory girls have and their personal transformations will resonate with American readers - here is the self-improvement, hard work and confidence Horatio Alger stuff that used to inspire America transplanted into a culture that is receptive and eager to absorb it, and here, too, are lucid accounts of the sad gaps between ambition and ability, ideals and reality, success and failure that go with immigrant experiences. The author was able to get closer to her subjects than anyone else I have read and writes very well indeed. Her account of how the internal migrant experience has mutated in China over the last 10-15 years is particularly fascinating. I read this cover to cover with great interest and hope the author is a work on a new book. (I don't know what is bothering the one star reviewer -- this review is written in Henan where I am visiting my Chinese wife's family, and I have read countless books on China and spent lots of time here and can vouch for the authenticity of this book).
Trustpilot
Copyright © 2022 Thriftbooks.com Terms of Use | Privacy Policy | Do Not Sell My Personal Information | Cookie Preferences | Accessibility Statement
ThriftBooks® and the ThriftBooks® logo are registered trademarks of Thrift Books Global, LLC