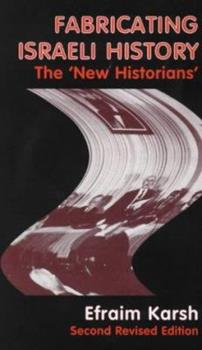 Israeli historiography is under assault by "new historians" exposing "Zionist narrative." This text takes issue with these "revisionists," arguing that they have ignored or misinterpreted much documentation in developing their analysis of Israel's history.

Published by Thriftbooks.com User , 16 years ago
This is a classic book. I read it when it first came out. It had a big effect on me. It may have changed me as a person more than any other book I have ever read. When I read it, I was a little surprised by the fact that Benny Morris had made an error that wound up with him saying that in 1938, David Ben-Gurion had said "We must expel Arabs and take their places." In fact, as Karsh pointed out, using the actual source would have confirmed a typo here: Ben-Gurion actually wrote, "We do not wish and do not need to expel Arabs and take their places." Yes, that was a big mistake on Morris' part, not checking the original source. And it was a big mistake to get something like this wrong. But I still pondered about how Morris could write something so unusual without checking it. After all, wasn't he aware of Ben-Gurion's other statements in the previous and following years? Wasn't he aware of how far this would have been from the statements of most of Ben-Gurion's political allies and supporters? Wasn't Morris aware of how insane it would have seemed to most Jews to prescribe a policy of war towards the much more numerous Arabs? What Karsh appeared to be telling me was that some extremely unlikely speculations had been presented as history. It would be as if some historian quoted John Kennedy as President claiming that the Earth was flat in an important speech, after proposing that we send a person to the Moon. Karsh did a careful job of coming up with the actual history here. And he then demolished Avi Shlaim's claim of "collusion across the Jordan." Here again, Karsh showed a situation in which a supposedly serious historian made a highly dubious claim and supported it with a single piece of highly disputable evidence. And the story continues in the next chapter when we see Shlaim and Ilan Pappe's claims about Britain going along with this non-existent collusion, and saying that Bevin warned the Jordanians not to invade territory belonging to the Jews. Here was another surprise: I had read Glubb's original claim that Bevin had said not to invade those areas. Glubb said that Bevin said it twice! And it seemed possible to me that Bevin could have said such a thing. But was Glubb telling the truth? Karsh, after carefully examining several records of what happened at that meeting, shows that Glubb was basically not telling the truth here. Another good job of investigation! But the biggest shock was saved for last. I had not realized that Shlaim had said "Far from being 'the great ogre who unleashed Arab armies to strangle the Jewish state at birth,' Bevin 'emerges from the documents as the guardian angel of the infant state.'" I had read quite a bit about Bevin, and I immediately recognized Shlaim's claim as completely and transparently false. It was like saying that the United States had fought in World War 2, but not telling the truth about which side we fought on: Germany's or the Soviet Union's. Had Shlaim really sai

This is how history should be written.

Published by Thriftbooks.com User , 17 years ago
Rely on primary sources. Be intellectually honest. Let evidence form the conclusions. Any first-year history major should have that drilled into their heads. It's also a basic set of tenets for journalists, academics, and anyone else seeking truth among facts and fiction. What I gain from Karsh's book is an objective perspective of the origin of the modern conflict in Israel. I am treated to primary sources, secondary accounts, and conclusions drawn directly from the evidence, and not wild imagination or heresay. The way it hangs together, and the way it is written, almost compels you to consider going through the bibliography to learn more. Presented in the context of an academic response to sloppy historiography, it is a scathing rebuttal that cannot be ignored. Presented as an introduction to the conflict, it doesn't stand alone. More than basic familiarity with the facts of Israel's modern (re)birth as a nation is needed to understand a majority of the references. However, once a basic understanding is in place, this book should serve as the standard by which other accounts or works are judged. Fred

Published by Thriftbooks.com User , 18 years ago
Accusations that this book is "propaganda" cannot be further from the truth. I suspect that people who make such accusations have not read the book. What Karsh does is show how the "new historians" (especially Morris, Pappe, and Shlaim) distort and misrepresent historical evidence in an effort to fabricate the history of Israel. Likewise, Karsh shows how these historians purposely ignore evidence which contradicts their claims, even though they may be aware of its existence. He shows that the only thing "new" about the "new historians" is their willingness to play loose with historical evidence. Karsh's book completely undermines the credibility of these historians. "Fabricating Israeli History" is an admirable defence of the truth against shoddy, biased scholarship.

Published by Thriftbooks.com User , 20 years ago
Karsh (a professor of Mediterranean Studies at the University of London) presents the first full-length and detailed rebuttal to those Israeli scholars who call themselves the "new historians." This group, whose ranks include Benny Morris, Ilan Pappé, and Avi Shlaim, seeks to expose Zionism as a rapacious movement and Israel as the actor that bears nearly full responsibility for the Arab-Israeli conflict and the Palestinian plight. Noting that others have critiqued the new historians' ignoring important source materials, Karsh concentrates on proving that "the very documentation used by these self-styled champions of `truth and morality' reveals a completely different picture from that which they have painted." Elaborating on the argument first made in his June 1996 article in the Middle East Quarterly, Karsh focuses on three main issues: David Ben-Gurion's alleged endorsement of "transferring" Arabs out of the territory to become Israel, "collusion" between the Zionist movement and King `Abdallah of Jordan to snuff out a Palestinian state, and secret British support for this joint effort. To establish his case, Karsh digs deeply into the documentary record, even going so far as to interpret crossed-out sections in Ben-Gurion's handwritten letters. That's all vital to making his case, but Karsh's key strength is the application of unprejudiced common sense to clarify issues clouded by the pseudo-scholarship of propagandists. Middle East Quarterly, Sept 1997

Published by Thriftbooks.com User , 20 years ago
The need for this work speaks volumes about the success of Arab propaganda in the last 30 years. Any study of any of revisionist and leftist historians, so-called "new" for good reason, should be filtered through the eyes of Professor Karsh--and Anita Shapira's 10,000-word New Republic piece, "The Past is Not a Foreign Country." Both call to task Avi Schlaim and Benny Morris, who like Tom Segev, fail to explain the war and peace that has afflicted the Middle East since Israel's founding. These new historians all make one gross omission: They consider it irrelevant that seven Arab nations attacked Israel upon her founding in 1947, making no secret of their intention to destroy the new Jewish state. In 1947, Arab League Secretary General Azzam Pasha promised "a war of extermination," "a momentous massacre" to be remembered "like the Mongolian massacres and the Crusades." Nor do new historians bother to note that such words were followed by gruesome acts, about which the world has forgotten, given the ubiquity of biased news reports. In 1947 and 1948, for example, all but one of the 600 Jews captured by Arab forces, including many noncombatants and children, were murdered in cold blood--and mutilated beyond recognition. According to Dr. Eugene Narrett and Jerusalem Post reporter Sarah Honig, amid scenes of rape and other sexual abuse, the Jewish victims were dismembered, decapitated and photographed by their proud captors. In the Etzion settlements south of Jerusalem, three truckloads full of Jewish corpses were found sexually mutilated. Current accounts of those years often do, however, detail supposedly heinous deeds of Jewish fighters-without appropriate context. In the so-called massacre at Deir Yassin some 200 Arabs were killed. But new historians like Morris, Schlaim and Segev delete the relevant and defining fact that Deir Yassin was the scene of a pitched all-day battle, in which every male Arab villager was armed. One has to turn to more thorough and honest reporters, like O Jerusalem author Larry Collins, to learn that Arab fighters in Deir Yassin used women and children as shields. In war, bad things happen. But new historians fail to ask four critical questions: Who started the war? What were their intentions? Who was forced to mount a defense? What were Israel's casualties? Ask, and truth becomes crystal clear. As I note in a forthcoming Midstream article, "Mourning the Death of Peace," Israel agreed in 1947 to accept a further partition of less than 20% of the land allotted by the League of Nations in 1922 as a National Home for the Jews. The Arabs, however, begrudged Israel even that small patch of land. In every war since, Arabs have mounted an effort to destroy Israel, either militarily or politically, just as they did in 1947. In 1967, Egyptian leader Gamel Nasser promised to wash Israel into the sea. This intention remains sadly evident today in the Fateh Constitution-and countless Arabic reports, statements and broadcasts
Copyright © 2020 Thriftbooks.com Terms of Use | Privacy Policy | Do Not Sell My Personal Information | Accessibility Statement
ThriftBooks® and the ThriftBooks® logo are registered trademarks of Thrift Books Global, LLC