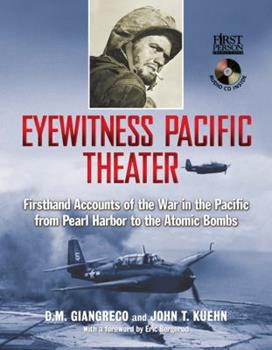 Eyewitness Pacific Theater: Firsthand Accounts of the War in the Pacific from Pearl Harbor to the Atomic Bombs

Eyewitness Pacific Theater tells the remarkable story of U.S. operations in the Pacific during World War II by documenting the experiences of the men and women who were stationed there. Written by award-winning author D.M. Giangreco and venerable Commander John T. Kuehn , this volume is illustrated with hundreds of contemporary photos, including wartime pictures of the veterans themselves. Bringing the full force of personal recollections home to...

A Nice Photo Album but Nothing Extraordinary

Published by Thriftbooks.com User , 12 years ago
This is a relatively large book at 11 in by 9 in with 272 pages. Along with the photos is a running dialog giving a brief summary of the engagements covered. Nestled in the dialog are many firsthand accounts of the sailors or marines that were there. The coverage starts with Pearl Harbor and ends with the dropping of the first bomb on Hiroshima and the Indianapolis incident. All the key engagements and key people are included so the book would be a decent training aid for a new student. Most pages have photos; they're good photos but they are also in a hundred other photo albums you can buy. And the dialog is similar to all the rest of those 100 other photo albums. The dialog is your typical, politically correct narrative, providing no critical comments or analysis on the Pearl Harbor disaster, intelligence blunders, Peleliu, Leyte Gulf miscue by Halsey or a dozen other situations that arose. If you are in need of a good Pacific War album or are a collector, this book is worthy of your consideration. If you already have a photo album and have read a few books on the war then this book will probably be redundant.
Trustpilot
Copyright © 2022 Thriftbooks.com Terms of Use | Privacy Policy | Do Not Sell My Personal Information | Accessibility Statement
ThriftBooks® and the ThriftBooks® logo are registered trademarks of Thrift Books Global, LLC