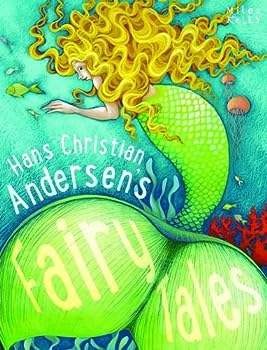 (Book #3 in the Andersen Masalları Series)

This description may be from another edition of this product. Hans Christian Andersen's classic tales of foolish emperors, lonely mermaids, icy queens and clever princesses have delighted children and adults alike for nearly two centuries. The stories' unique...

Published by Anonymous , 1 year ago
I have yet to read the book. Bought in like new condition leather bound. And was pleasantly surprised that its still sealed although theres rubbed edges. Hope the inside is in great condition as well

I've been looking for this book for a long time.

Published by Elaine Haizlip , 1 year ago
My daughter will be 49 yrs old soon and she has had me looking for this book l long time. She has fond memories as a child of going to sleep with me reading her stories from it.

This book is for adults as much as children

Published by Thriftbooks.com User , 14 years ago
Hans Chrisitian Andersen's fairy tales are incomparable. They have a level of depth absent in any other collection of fairy tales including the Grimm Brothers, Arabian nights etc...He amalgmates magic and reality and seals them in beautiful poetic expression. You will feel pain and love, rejection and hope, despair and persistence. The characters and images are sad yet impeccable. The tales are vivaciously symbolic of your dreams and reality. My favorite tales are The Red Shoes and The Little Mermaid(which is way different from Disney's version). They are a must-read.

The best there is

Published by Thriftbooks.com User , 20 years ago
It is a pity that most people only know Hans Christian Andersen for a few of his "easiest" fairy tales. What springs to mind for almost everyone is stories like "The Emperor's New Clothes", "The Ugly Duckling" and perhaps "The Snowqueen". But Hans Christian Andersen has written a vast array of profoundly touching tales. In Odense, Denmark the Danish actor Troels Møller said (two years ago in a lecture on "H.C.A. & God"), "We are all going to die. H.C.Andersen knew this, he worked with it and he used it to show us all the beauty of life - the beauty of all life." His stories are not only for children they are for everyone. The likes of H.C.Andersen can be found nowhere. If you want to discover the full grandeur of his genius you MUST read more than just his popular works. I would even urge you to go to Odense to learn Danish - Much is lost in translation. But although the English translation doesn't reach the heights of the original Danish text I still give it one of my 5 star sets. And don't think that it's a case of petty nationalism - you will find no other Danish writer that I'll grant 5 great ones. It is entertainment, philosphy and religion.

The Magician from the North

Published by Thriftbooks.com User , 23 years ago
It ought to be a source of some astonishment that the writings of Hans Christian Andersen have triumphed over the passage of time as they have. Who is more stolidly nineteenth-century, more bourgeois, more moistly sentimental, than this ever-lonely Danish poet and fabulist? Yet the continuing stream of translations and adaptations of his work--of which Disney's diluted and distorting version of his great "Little Mermaid" is only the most famous recent example--testifies to the ageless qualities of his genius. He often represented himself as the mere mouthpiece of traditional lore, the transmitter of the folk wisdom of his nurses; in our day he is tucked away with Mother Goose rhymes and other noncontroversial literature. Neither mode of understanding fully represents him. He belongs to that remarkable category--small even among great writers--of myth-makers, whose characters have come to assume near-archetypal significance. The little mermaid, the dauntless tin soldier, the ugly duckling are no longer simply memorable: they are continuing analogues for the developing self. He is a writer for children only in the sense that children deserve the best literature. His stories offer nothing easy, and little that is sweet: they puzzle and trouble; they take root in the imagination, and childhood is only the beginning of our long relationship with Andersen's haunting images. Is it joy or sorrow that first makes us weep for Elisa and her unlucky brothers in "The Wild Swans"? Who but Andersen could have dared to make the inanimate fixity of the tin soldier an image of the steadfastness of deep love in adversity? Who could forget the robber girl in "The Snow Queen," gruffly loyal,never sleeping without her knife? He wrote his tales with the colloquial humility of the storyteller, spiced with wit and homely details that give his great themes a distinctive flavor:the oysters clamped to the royal merfolk's tails in "The Little Mermaid," or the puppet queen offering her cr! own to the wandering friends in "The Traveling Companion." Andersen's sway over the writing of literature for children is well known, but more could be said about his deep influence on psychological theory, and the fascination he has exerted on contemporary writers, from Ursula Synge and a host of other fantasists to poets such as Marilyn Hacker and Anne Sexton. He importantly anticipates, and may have influenced, writers as important and diverse as Isak Dinesen, Franz Kafka, and Gabriel Garcia Marquez. With a writer as rich, as pleasing, as rewarding, as Hans Christian Andersen, it is never too soon to commence reading his tales, and it is never too late to read them again.
Copyright © 2020 Thriftbooks.com Terms of Use | Privacy Policy | Do Not Sell My Personal Information | Accessibility Statement
ThriftBooks® and the ThriftBooks® logo are registered trademarks of Thrift Books Global, LLC