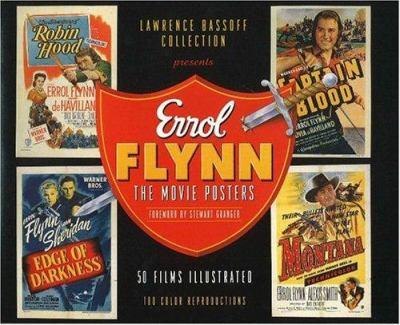 Movie-legend Errol Flynn lived a short life, but enjoyed adventure, acclaim and sensation. These colour reproductions of movie posters illustrate Flynn's verve, charm and swordmanship. Originally displayed in cinemas, the posters also document the Warner Brothers movie poster style from 1935 to 1953, and the heyday of the Hollywood swashbuckler from 1920 to 1959.

Published by Thriftbooks.com User , 21 years ago
Although this large-scale art book focuses on Errol Flynn's movie posters, it manages to be the best book out there on Flynn's career. There is an evocative introduction by Stewart Granger, good essays on Flynn's bio and on the Warner Bros. poster style (which was, sadly, the weakest of the major U.S. studios in the movies' golden age). There are beautiful reproductions of the posters and lobby cards themselves, from an impressively detailed collection (with samples of other swashbuckling movie posters for comparison). And finally, there are essays on each of Flynn's films that are fond, witty, and succinct. Beyond all this, though, it's the best Flynn book because it provides a clear and objective look at the trajectory of a remarkable career. It's amazing to see Flynn's image placed front and center on the poster of his first starring film, "Captain Blood," and it's both hilarious and heartbreaking to see the Dorian Grey-like image on his last, "Cuban Rebel Girls." Bassoff is that rare thing: a committed fan who loves his subject and gives him his due, but is far from star-struck. A great book.

Published by Thriftbooks.com User , 22 years ago
This is a prestigious classy book and it's handsomely put together. The book will be a great collector's item.Errol Flynn is Hollywood's greatest legend because he is a nostalgic, handsome, dashing, daring action hero.
Copyright © 2020 Thriftbooks.com Terms of Use | Privacy Policy | Do Not Sell My Personal Information | Accessibility Statement
ThriftBooks® and the ThriftBooks® logo are registered trademarks of Thrift Books Global, LLC