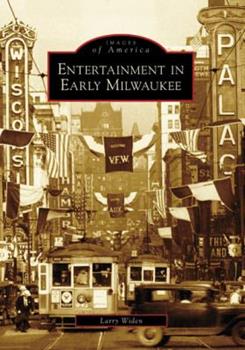 What did early Milwaukeeans do to have fun and relax? This book answers that question, covering pop culture from the mid-1800s up to 1950, from the earliest tavern stages hosting traditional German plays and musicals, to the large traveling circus acts that arrived via the railroad, to the beer gardens, nickelodeons, and old grand cinemas that dominated the city s landscape during the first half of the 20th century. In its heyday, Milwaukee had several...

A Trip to Old Milwaukee

Published by Thriftbooks.com User , 13 years ago
Larry Widen's "Entertainment in Early Milwaukee" is a photographic journey through Milwaukee, Wisconsin from the mid-1880s through about 1950. The book focuses upon the opportunites for leisure and entertainment the city offered and upon how Milwaukeans made use of them. Widen is an amateur historian who owns a movie theatre in Milwaukee. This book is part of the series called "Images of America" by Arcadia Publishing which preseves in books of photographs the legacy of neighborhoods and communities throughout the United States. In its 128 pages the book includes over 200 photographs together with annotations by Widen. Most readers will want to approach the "Images of America" series through reading about communities with meaning to them. Thus, I was raised in Milwaukee and lived in the city through college and my early twenties too many years ago. Although most the period covered by this book is before my time, it still brought back memories by connecting me to places I once knew well. In my late teens, I spent much time walking through the city. Quite separately from the subject matter of this book, I enjoyed seeing places and scenes from Milwaukee. I particuarly liked the many photographs which show the streetcars that served the city until they were displaced in full in 1958. The book brought me back to many places I knew such as downtown Milwaukee with its department stores and movie theatres, and the public library, where I spent a good many hours, together with the city museum and recently renovated city auditorium. I also enjoyed the photos of the State Fair grounds which, as Widen points out,looked much the same 100 years ago as they did when I visited the fair over 30 years ago and as they do today. There were also many photographs in the book of places close to my home, including Washington Park (unfortunately there are no photographs of the old Washington Park zoo), the Uptown movie theatre, which I went to for many a Saturday matinee, and the Times theatre, which is still in Milwaukee and owned by Widen. I went to the Times when I was in high school in the 1960s. During that time it showed art and foreign films. Besides these community landmarks, the book includes a photograph of the beginning stages of the University of Wisconsin-Milwaukee, my alma mater, and photos of Marquette University near downtown. Besides raising many memories, this book taught me a great deal about my former city. Widen's written introduction offers a good overview of the history of leisure activities in Milwaukee. He points out, for example, that Houdini got his start in Milwaukee and performed in the city several times after he became famous. I was pleased to read Widen's account of George Webb, who served inexpensive hamburgers in Milwaukee well before the advent of McDonalds, but there are no photos of Webb's hamburger parlors in the book. The six chapters in Widen's book document the early nickolodeons and dime theatres from the turn of the c
Copyright © 2022 Thriftbooks.com Terms of Use | Privacy Policy | Do Not Sell My Personal Information | Accessibility Statement
ThriftBooks® and the ThriftBooks® logo are registered trademarks of Thrift Books Global, LLC