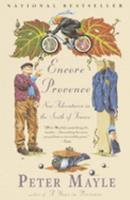 Encore Provence: New Adventures in the South of France

(Book #3 in the Provence Series)

In his most delightful foray into the wonders of Proven al life, Peter Mayle returns to France and puts behind him cholesterol worries, shopping by phone, California wines, and other concerns that plagued him after too much time away. In Encore Provence , Mayle gives us a glimpse into the secrets of the truffle trade, a parfumerie lesson on the delicacies of scent, an exploration of the genetic effects of 2,000 years of foie gras, and a small-town...

Charming Visit to France: As the Romans D0-its Italian Equal

Published by Thriftbooks.com User , 21 years ago
I read this book and many of Mayles others and longed for the European sensibilities; the sensual, amusing, delicious ways. Then I visited France and although it was beautiful I found it lacking in something that I couldn't put a finger on. Then I visited Italy and my life changed. Years went by and I finally took the plunge and moved to the place that captured my heart, bella Roma. Then recently I read the new book by Alan Epstein, As the Romans Do: The Delights, Dramas and Daily Diversions of Life in the Eternal City and he described exactly what it was I was feeling. If you didn't get enough with a Year in Provence or if you love Italy as much or more than France then you MUST read As the Romans Do.

Published by Thriftbooks.com User , 21 years ago
I really can't understand why people didn't like this book as much as Mayle's previous works. I think it's absolutely delightful. Mayle works his special brand of magic and captures the essence of Provence perfectly. Some reviewers have suggested that Mayle write about other locales instead, but to me that would be like John Grisham writing a book that didn't contain a main character from the legal profession. Provence is Peter Mayle country and he describes it with genius. I can't wait until his NEXT book!

Published by Thriftbooks.com User , 22 years ago
Having just finished the audio book obtained from the library, I rushed home to see if I could find (online) the cheese, wine and olive oil Mayle writes about. I wasn't surprised I couldn't afford any of them, but I now have a desire to try them all.I have disliked everything French since the good Sisters at Holy Spirit attempted to teach me the language. Mayle has gotten me to rethink my long held opinions.I'll have to scrape enough money together to buy the hardcover book. It's one I want in MY library to enjoy when I need to escape myself.

Still evocative after all these years

Published by Thriftbooks.com User , 22 years ago
The people who hated this book seem to concentrate on two things: His spirited defense of Provence in response to a poor review, and the feel of the book as a collection of essays instead of a coherent story. I'm ambivalent about the former criticism, but I wouldn't put down this book because it doesn't have a story; the overwhelming majority of the chapters ooze the trademark Mayle charm, which is always well worth savouring. I laughed out loud several times during the book, and, well, that's why we have Peter Mayle. If you want an charmingly light-hearted read, this book won't disappoint you.

This is Good Stuff

Published by Thriftbooks.com User , 22 years ago
Alright, so this isn't the first time that Mr. Mayle has written about Provence. Authors tend to write about the regions they adore--William Faulkner comes immediately to mind. The point is that Mr. Mayle writes terrifically well. He makes the reader (or at least me) laugh out loud. This book is especially nice because Mr. Mayle gives us some of his own opinions on things (could it be that he is becoming less English and More French?) In any event, this is an exceptionally well written book and I heartily encourage any and all to read it.
Copyright © 2020 Thriftbooks.com Terms of Use | Privacy Policy | Do Not Sell My Personal Information | Accessibility Statement
ThriftBooks® and the ThriftBooks® logo are registered trademarks of Thrift Books Global, LLC