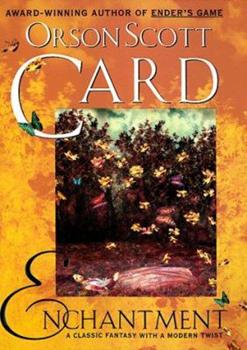 In 'Enchantment', Orson Scott Card works his magic as never before, transforming the timeless story of 'Sleeping Beauty' into an original fantasy brimming with romance and adventure.

Published by Thriftbooks.com User , 17 years ago
When I first picked up this book, I expected it to be yet another one of those "modern Jewish person goes back in time to experience some aspect of Jewish history" trips. (Why is it that SF writers always have to send the Jews back into the past? Don't they think we will have a future?) Yes, there is an aspect of that here, but it's much, much more. The focus is not so much on JEWISH history as it is on RUSSIAN history, although Jewishness does play an important part. The year is 1975, the place is Soviet Russia. Young Ivan "Vanya" Smetski finds out he is Jewish when his father decides to claim his Jewish heritage in order to emigrate to Israel and then, hopefully, to the United States. Politically, it is a time when America is putting pressure on the USSR to release more Soviet Jews, but the Soviets react the other way and clamp down on letting Russian Jews leave. The result is that Ivan's father loses his university position, the Smetskis lose their apartment, and the family ends up living with a cousin named Marek on a little farm near Kiev. At this point, little Vanya is 10 years old. One day, while out in the woods by the farm, Vanya discovers a clearing with a strange round pit full of leaves. Something is moving in the pit -- a monster? The leaves rustle away and he thinks he sees a woman's face rising up among the leaves. He runs away in terror, but never forgets that place, although he thinks of it as some sort of nightmare or hallucination. Years later, the Smetskis are living in America, and Vanya, now calling himself "Ivan" with the English pronunciation, is working on his Ph.D. thesis about ancient Russian fairy tales. He returns to the part of Russia where he grew up (now part of the Ukrainian Republic) and eventually finds that same clearing in the forest. There is indeed a woman asleep on a pedestal in the middle of the pit -- and a huge enchanted bear is guarding her. Sleeping Beauty is real... Only it's not quite "happily ever after." After kissing the princess, he must agree to marry her in order to get past the bear -- or be killed by it. He proposes and she accepts. He then follows her over a magical bridge into 10th-century Russia -- and into a major a culture shock. Suddenly he is in a barbaric world where literacy and scholarship count for next to nothing, and he is considered a useless weakling because he cannot wield a sword or battle axe. From then on, the real adventure begins... The book is a convincing mix of realism and magical fantasy that is based on serious historical research, but one thing did bother me in the beginning of the book. There is a rather strange scene where, after Professor Smetski decides to be openly Jewish, he has a mohel (ritual circumciser) come to the house to circumcise him and 10-year-old Ivan. Now, I do know that most Russiam Jews of that era were not circumcised because the Soviet government forbade it. I also know that, after emigration from Russia, many suc

Published by Thriftbooks.com User , 19 years ago
Not a typical Card book, but then, what exactly is a "typical Card book"? It starts with a beautiful portrayal of a Jewish Boy growing up in Russia, moves to some gritty "it-sounded-good-in-theory" fantasy, which in turns alternates with fairy-tale fantasy. The fairy-tales are appropriately Russian, and along the way the truth behind many classical Russian folklore stories is revealed.Yes, it's as funny as it sounds.Add to that great Orson Card characters, and the strength his moral believes often lend to his books, and you get what would have been considered a masterpiece if written by anyone else. I haven't read his biblical series, but it compares well to his terrific "Hart's Hope" fantasy, blows his horror books out of the water, and is at least on par with his SF.I can't believe no one noticed this book, maybe because it's mostly fantasy. Highly recommended, even to those who think they only like Card for his SF.

An excellent "What came next" story!

Published by Thriftbooks.com User , 22 years ago
I am probably the only sci-fi/fantasy reader in the United States who read "Enchantment" as her introduction to Orson Scott Card's fiction. As unbelievable as it may sound, I avoided reading every OSC book, despite the fact that my sister and best friend did everything but read "Ender's Game" to me. You see, "EG" was once a class assignment (I chose to read Dickens' "David Copperfield" instead -- talk about your opposite book!), and after that, I refused to read it more out of obstinance than anything else. But I'm glad I read "Enchantment."Coming right off the heels of Robin McKinley's "Spindle's End," I wasn't sure "Enchantment" would be different enough to hold my attention. I was, fortunately, wrong! The best part about this book, aside from complete characters, effortless narration, and a compelling plot -- no small asides! -- was the fact that it had much more to do with what happened AFTER Ivan kissed and awoke the princess. We learned about her village, ancient Slavic culture and religion, magic (both ancient and modern) and the inner workings of an enchanted princess. Card handled 8 viewpoints with ease, though of course the dominant ones were Ivan, Princess Katerina, and the witch, Baba Yaga. As I am completely unfamiliar with Russian culture and folklore, I found OSC's version of Baba Yaga a completely hideous and believable villain; I was glad to get her viewpoint throughout the story. I also appreciated OSC's depiction of modern and ancient Russia, which to me are now familiar in my head. He conveys incredible amounts of information in few words, and the plot never lags; though this is a long book, it is a quick read. We also feel like we get to know the characters right away, and he writes with equal believability about women and men (I guess it helps to have a wife who proofreads your work :-) ).If you ever wanted to read an excellent story, get to know many interesting characters, and find out what happened after Sleeping Beauty woke up, read "Enchantment"!

A new classic. Card's best ever.

Published by Thriftbooks.com User , 22 years ago
I'm a tough critic, and I don't throw around sentences like "this is the best work of fantasy I've read in a year" without giving the matter some thought. But this is a really superb story. I cannot see where it could have been done better, and I don't say that often.It's superb because it is told vigorously and plausibly. Assume for a few hours that gods and magic have been real, and that there can be magic bridges across time, and the actions of the characters make perfect sense. They are all intelligent problem-solvers - not only Ivan and his parents and Princess Katarina, but the witch-queen Baba Yaga and her captive Bear-god. At no point does Card feel the need to make a leading character into a dunce or a lunatic to shove the plot along.Card also avoids many pitfalls which you might be afraid that he fell into, given the subject matter and the fact that he really succumbed to some of them in the "Alvin Maker" series. For example, he does not bog the story down in discussing contemporary post-Soviet politics, or in the fine points of culture and technology in tenth-century Ukraine, nor in determining who the real heroes and villains were in Eastern Europe then, nor does he clutter the volume with every Russian folk tale element ever recorded. Nor, although this book does elaborate on the "Sleeping Beauty" story, is it merely a self-conscious "retelling" of the kind that we fantasy readers have come to dread, often in connection with Arthurian legend. The present and the past are nicely balanced and interwoven, and the center of attention throughout is on the story rather than on its setting and provenance.Furthermore, he manages to throw in a few surprising plot twists, which is difficult to do in a story like this, considering that you mostly expect that the hero and heroine are not going to get killed by Baba Yaga and it's mainly a question of how they will win. Nothing here is trite. Furthermore Card avoids the temptation to explain "everything" at the end or to develop a textbook on the laws of magic. He recognizes that some things have to be explained, but other things just work because that's how they work in fairy tales, and he draws the line between the two sets of things quite well.You know how you know that a book has really worked? After you are done with the book - you find that you aren't really done with it. You leaf back through it and re-read some of the nicely done parts and recapture how you felt at the first read-through. Then you put it on your shelf along with your other favorite books, where you can pick it up in a few months or a year and read it again. Not all that much stuff by Card has made it onto that shelf of mine, but this one has.

Published by Thriftbooks.com User , 22 years ago
Once again, Orson Scott Card has done a masterful job of making fantastical situations seem realistic -- even the relationship between the malevolent witch, Baba Yaga, and her kidnapped Bear-god husband. This is a well written story of clashing cultures, modern and ancient, as well as clashing spiritualities: Christian, Jewish, Pagan. The novel is respectful of them all. It's also a romance with a happy ending that bridges both worlds. And contrary to what one reviewer wrote, Bruce Cockburn (whose lyrics are quoted in the novel) IS cool!
Trustpilot
Copyright © 2022 Thriftbooks.com Terms of Use | Privacy Policy | Do Not Sell or Share My Personal Information | Accessibility Statement
ThriftBooks® and the ThriftBooks® logo are registered trademarks of Thrift Books Global, LLC